The northern end of the Bridger Range is proposed as wilderness by some organizations like the Gallatin Yellowstone Wilderness Alliance. Photo George Wuerthner.

I recently visited the North Bridger Timber sale (euphemistically called the North Bridger Forest Health Project)  on the Custer Gallatin NF outside of Bozeman, Montana. Like so many timber sales today, the proposal was justified based on “improving” forest “health” and reducing the chance of “wildfire.”

Amazingly the Forest Service claims that if they don’t log the forest (killing the trees with chain saws), the trees will die from root rot, beetles, and other “calamities” In other words, death by chainsaws is acceptable, but mortality by natural agents is not.

Most of the trees being cut are larger-diameter individuals. If you were logging for precluding wildfires, you would leave the larger trees since they are the most resistant to wildfire. They are also the most important to wildlife. But they are also the most desirable to the timber industry giving an indication of what the real purpose of the “forest health” project is about. It’s improving the “health” of the timber industry, not the forest.

The problem is that the Forest Service can’t see the forest through the trees. Green trees are desirable to the timber industry, but dead snags from fire or bark beetles are critical to “healthy forest ecosystems.” 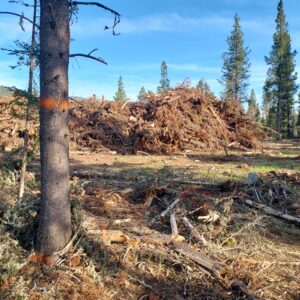 Logging reduces the “snag” habitat on a site, and degrades the forest ecosystem. Photo George Wuerthner.

In typical Forest Service fashion, as they emphasize the need to restrict wildfire while at the same time saying they must log to promote aspen regeneration. Aspen is one species that sprouts after a fire, so the best way to “restore” aspen is to permit wildfires to occur. But this goes against the Forest Service entire “control” mindset. Only chainsaw medicine is allowed to “restore” forests.

The timber sale includes logging part of a roadless area proposed for wilderness designation and creating “temporary” roads. It will remove carbon from the site and open the area to greater human access displacing wildlife.

Also as I have written in many other places, thinning forest doesn’t preclude fires under extreme fire weather, and all large fires are burning under such conditions.  Climate warming is driving large blazes, not fuels.

Worse for the public is that the North Bridger Timber sale is nothing more than an effort to subsidize and channel public forests to the private timber industry, while the taxpayer foots the bill.

Several groups sued unsuccessfully to stop this sale, including the Alliance for Wild Rockies, Native Ecosystems, Cottonwood Law Firm, and Gallatin Wildlife Association as an amicus supporter. But since the Forest Service did almost no environmental review of impacts, it instead used the dubious “categorical exclusion” to avoid public scrutiny.  Cottonwood Law Firm is arguing the case is before the 9th Circuit Court of Appeal.

This timber sale, like many in Montana, is supported by so-called conservation organizations. For example, the North Bridger “deforestation sale” is endorsed by the Greater Yellowstone Coalition, The Wilderness Society, and Winter Wildlands. (Note I tried to contact all three groups for comment but received no response when I was finishing this piece).

You would think these groups would want greater accountability from the Forest Service, and oppose money losing and destructive timber sales. One wonders if the people who work for these groups lack in-depth ecological understanding, or maybe they lack ethics. I like to think they are basically good folks who simply do not understand ecology enough to ask the right questions or demand better responses from the agencies. At the very least, they could remain neutral and not be giving their tacit approval to forest destruction.

Whatever the reason, supporting what is ostensibly a commercial timber operation that destroys forest ecosystems is disingenuous at best. I imagine most people contributing their hard-earned dollars to these organizations think they are acting in an honorable manner.

What we need are people who speak for the forest, not the forest industry. Sadly most of the larger conservation groups in Montana have lost their way, and see their mission as collaboration rather than ecosystem protection.

Correction: An earlier version of this article incorrectly listed Montana Wild (formerly Montana Wilderness Association) as supporting the North Bridger Timber Sale. They do not.