Thanksgiving was born of war: first, colonial conquest masquerading as concord, then a means to bind the nation in the midst of the Civil War.

Abraham Lincoln issued his Thanksgiving Proclamation on October 3rd, 1863, a week after Sarah Hale, editor of the Lady’s Book magazine, had written a letter to the president urging him to elevate the occasion to a national holiday: “You may have observed that, for some years past, there has been an increasing interest felt in our land to have the Thanksgiving held on the same day, in all the States; it now needs National recognition and authoritive [sic] fixation, only, to become permanently, an American custom and institution.”

For nearly two decades Hale had been lobbying indefatigably for a unified national celebration, printing in her periodical heartwarming tales of Thanksgivings of yore and printing recipes for turkey and pumpkin pie and other “traditional” New England dishes.

Following Hale’s advice, Lincoln’s proclamation set the date as the last Thursday in November, to be promulgated in unison by the governors of the states and territories. Thanksgiving had been celebrated at various times across the autumn, even as late as January, but not consistently and not everywhere. The custom was largely unknown in the South.

Before the Civil War, the only official American holidays had been Washington’s Birthday and the Fourth of July. At the urging of his Secretary of State and former rival for the presidency William Seward, Lincoln had called for other observations in 1863 that might help bind the nation. In March he issued a “Proclamation Appointing a Day of Humiliation, Fasting, and Prayer” to be observed on April 30th (a Thursday) “It behooves us … to humble ourselves before the offended Power, to confess our national sins, and to pray for clemency and forgiveness.”

Rituals of expiation had been crucial to Puritan culture. But most Thanksgiving guilt now gets shoved to the side of the moral plate like that dismal green bean casserole, only partially hidden beneath some turkey bones stacked next to a mound of diversionary cranberry sauce.

In David Silverman’s illuminating This Land Is Their Land: The Wampanoag Indians, Plymouth Colony, and the Troubled History of Thanksgiving, we learn that celebratory Puritan banquets were called “Rejoicings.” A “Thanksgiving” was a day of devout prayer and penance.

Lincoln’s Thanksgiving Proclamation makes no mention of Pilgrims, but it is saturated with puritanical language. The text extols the nation’s flourishing industry and agriculture, the clearing of land and expansion of settlements and (white) population across the continent. These developments are “the gracious gifts of the Most High God, who while dealing with us in anger for our sins, hath nevertheless remembered mercy. It has seemed to me fit and proper that they should be solemnly, reverently, and gratefully acknowledged as with one heart and one voice by the whole American people.”

Lincoln believed the nation ready for Thanksgiving. A week before the first national observance of the holiday, the president held his address at in Gettysburg, the bloodiest battle of the Civil War fought on the three days directly before the Fourth of July that same year of 1863. What is it about Thursdays in the baking of America’s homemade history?

Though signed by Lincoln, the Thanksgiving Proclamation was written by Seward. As the excerpt above confirms, this stilted slab of prose is hardly of the oratorical timber of the Gettysburg Address.

Given the religious language conjuring it into existence, the new national ritual needed an anthem. The noted Episcopal clergyman W. A. Muhlenberg, founder of St. Luke’s Hospital in New York and author of A Plea for Christian Hymns as well as much religious poetry, rushed to his writing desk and transformed scraps of Seward’s words into seven rhyming verses, the first of which raises a jubilant voice to Manifest Destiny:

Give thanks, all ye people, give thanks to the Lord,
Alleluias of freedom, with joyful accord,
Let the east and the west, north and south roll along,
Sea, mountain and prairie, one thanksgiving song.

Next, the music had to be found. J. W. Turner was drafted into service by the Oliver Ditson Company of Boston, one of American’s leading music publishers. This tunesmith had made a name—and a good living—for himself in the 1840s churning out numbers for the Virginia Serenaders, the wildly popular blackface band that was the first such group to “elevate” minstrelsy to the status of concert entertainment. 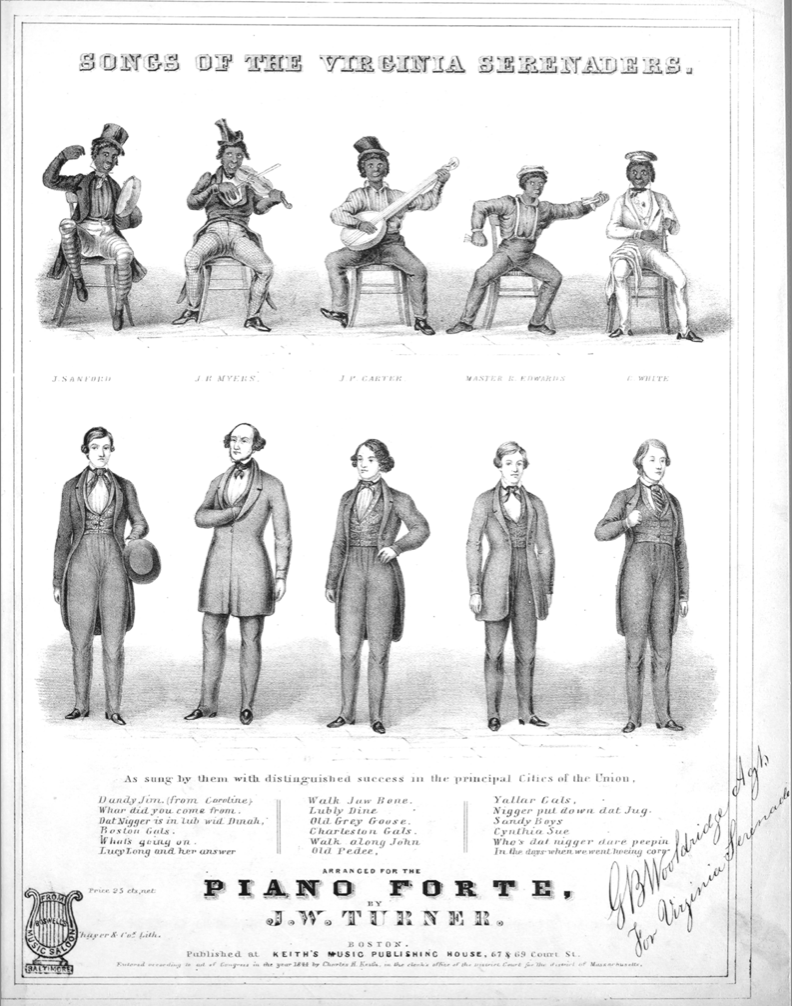 Turner’s music for Muhlenberg’s poetry doesn’t depart much from the style he honed for the blackface minstrels: roughly hewn harmonies; sweet and easy melodic contours often of a rustic bent; the twang of few chromatic barbershop inflections; the occasional ardent leap. The “President’s Hymn” is marked “Maestoso,” as if pleading for sacred heft. Although martial dotted rhythms and repeated notes emit a whiff of triumphalist Victorian hymnody, the style could be best described as “down home,” and doesn’t stray terribly far from the sound of Turner’s Virginia Serenader hits like “Nigger put down dat Jug” and “Yallar Gals.”

Muhlenberg had hoped that his text would be taken up as an official Thanksgiving anthem for the nation. Various late 19th– and early 20th-century hymnals included the “President’s Hymn” in their Thanksgiving sections, but unstitched from Turner’s tune. After stoking the celebratory fires of the first Thanksgiving in 1863, Turner’s setting seems quickly to have disappeared from national earshot, Lincoln’s Thanksgiving declaration seemingly spared the taint of blackface.

This 1863 Protestant rejoicing, from Hale to Muhlenberg to Turner, responds to the tragedy of war and to the promise of industrious peace. There is no mention of slavery. Yet if one gathers round to sing as some sang in 1863, one hears a chorus of voices dissonant with Thanksgiving’s white-meat myths.