The Rethinking Our Relationship to Pit Bulls 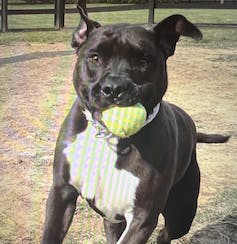 As recently as 50 years ago, the pit bull was America’s favorite dog. Pit bulls were everywhere. They were popular in advertising and used to promote the joys of pet-and-human friendship. Nipper on the RCA Victor label, Pete the Pup in the “Our Gang” comedy short films, and the flag-wrapped dog on a classic World War I poster all were pit bulls.

With National Pit Bull Awareness Day celebrated on Oct. 26, it’s a fitting time to ask how these dogs came to be seen as a dangerous threat.

As a professor of humanities and law, I have studied the legal history of slaves, vagrants, criminals, terror suspects and others deemed threats to civilized society. For my books “The Law is a White Dog” and “With Dogs at the Edge of Life,” I explored human-dog relationships and how laws and regulations can deny equal protection to entire classes of beings.

In my experience with these dogs – including nearly 12 years living with Stella, the daughter of champion fighting dogs – I have learned that pit bulls are not inherently dangerous. Like other dogs, they can become dangerous in certain situations, and at the hands of certain owners. But in my view, there is no defensible rationale for condemning not only all pit bulls, but any dog with a single pit bull gene, as some laws do.

I see such action as canine profiling, which recalls another legal fiction: the taint or stain of blood that ordained human degradation and race hatred in the United States. 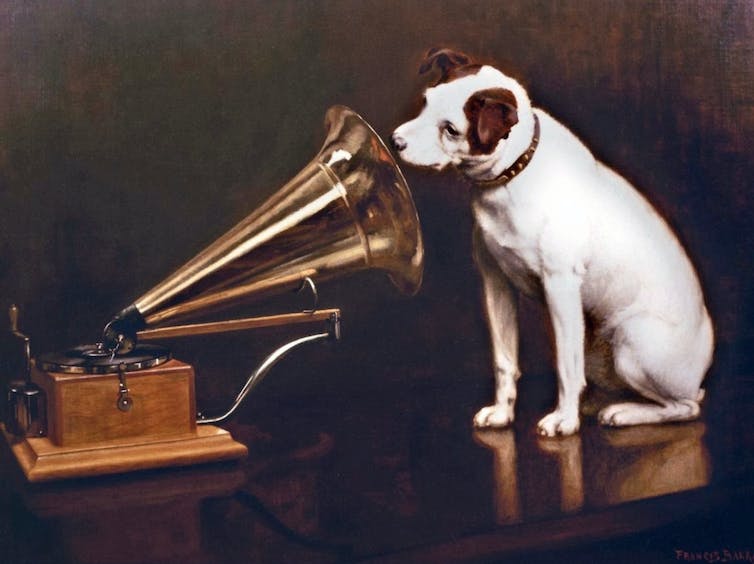 English artist Francis Barraud (1856-1924) painted his brother’s dog Nipper listening to the horn of an early phonograph in 1898. Victor Talking Machine Co. began using the symbol in its trademark, His Master’s Voice, in 1900. Wikipedia.

The pit bull is strong. Its jaw grip is almost impossible to break. Bred over centuries to bite and hold large animals like bears and bulls around the face and head, it’s known as a “game dog.” Its bravery and strength won’t allow it to give up, no matter how long the struggle. It loves with the same strength; its loyalty remains the stuff of legend.

For decades pit bulls’ tenacity encouraged the sport of dogfighting, with the dogs “pitted” against each other. Fights often went to the death, and winning animals earned huge sums for those who bet on them.

But betting on dogs is not a high-class sport. Dogs are not horses; they cost little to acquire and maintain. Pit bulls easily and quickly became associated with the poor, and especially with Black men, in a narrative that connected pit bulls with gang violence and crime.

That’s how prejudice works: The one-on-one lamination of the pit bull onto the African American male reduced people to their accessories.

Dogfighting was outlawed in all 50 states by 1976, although illegal businesses persisted. Coverage of the practice spawned broad assertionsabout the dogs that did the fighting. As breed bans proliferated, legal rulings proclaimed these dogs “dangerous to the safety or health of the community” and judged that “public interests demand that the worthless shall be exterminated.”

In 1987 Sports Illustrated put a pit bull, teeth bared, on its cover, with the headline “Beware of this Dog,” which it characterized as born with “a will to kill.” Time magazine published “Time Bombs on Legs” featuring this “vicious hound of the Baskervilles” that “seized small children like rag dolls and mauled them to death in a frenzy of bloodletting.”

If a dog has “vicious propensities,” the owner is assumed to share in this projected violence, both legally and generally in public perception. And once deemed “contraband,” both property and people are at risk.

This was evident in the much-publicized 2007 indictment of Atlanta Falcons quarterback Michael Vick for running a dogfighting business called Bad Newz Kennels in Virginia. Even the Humane Society of the United States and People for the Ethical Treatment of Animals – two of the nation’s leading animal welfare advocacy groups – argued that the 47 pit bulls recovered from the facility should be killed because they posed a threat to people and other animals.

If not for the intervention of Best Friends Animal Society, Vick’s dogs would have been euthanized. As the film “Champions” recounts, a court-appointed special master determined each dog’s fate. Ultimately, nearly all of the dogs were successfully placed in sanctuaries or adoptive homes.

Pit bulls still suffer more than any other dogs from the fact that they are a type of dog, not a distinct breed. Once recognized by the American Kennel Club as an American Staffordshire terrier, popularly known as an Amstaff, and registered with the United Kennel Club and the American Dog Breeders Association as an American pit bull terrier, now any dog characterized as a “pit bull type” can be considered an outlaw in many communities.

For example, in its 2012 Tracey v. Solesky ruling, the Maryland Court of Appeals modified the state’s common law in cases involving dog injuries. Any dog containing pit bull genes was “inherently dangerous” as a matter of law.

This subjected owners and landlords to what the courts call “strict liability.” As the court declared: “When an attack involves pit bulls, it is no longer necessary to prove that the particular pit bull or pit bulls are dangerous.”

Dissenting from the ruling, Judge Clayton Greene recognized the absurdity of the majority opinion’s “unworkable rule”: “How much ‘pit bull,’” he asked, “must there be in a dog to bring it within the strict liability edict?”

It’s equally unanswerable how to tell when a dog is a pit bull mix. From the shape of its head? Its stance? The way it looks at you?

Conundrums like these call into question statistics that show pit bulls to be more dangerous than other breeds. These figures vary a great deal depending on their sources.

Any statistics about pit bull attacks depend on the definition of a pit bull – yet it’s really hard to get good dog bite data that accurately IDs the breed.

Pit bulls demand a great deal more from humans than some dogs, but alongside their bracing way of being in the world, we humans learn another way of thinking and loving. Compared with many other breeds, they offer a more demanding but always affecting communion.