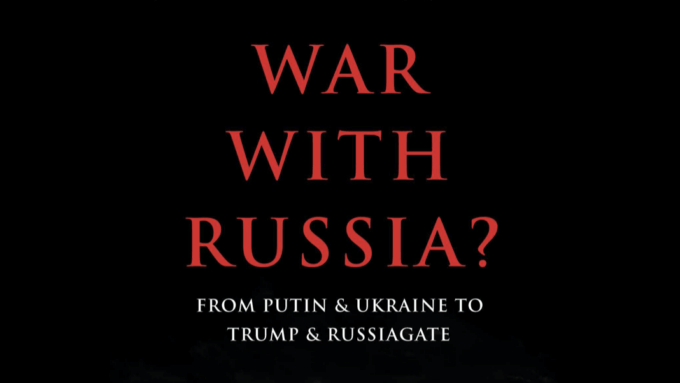 Book Cover for War with Russia?: From Putin & Ukraine to Trump & Russiagate by Stephen Cohen

Reading Stephen Cohen’s War with Russia: from Putin and Ukraine to Trump and Russiagate (2022) is required if we are to going to strip fictional narratives away from the Russia-Ukraine conflict. In this third article of diving for pearls from our intrepid scholar, we are zeroing in on his penetrating analysis of conflicting narratives on the Ukrainian crisis. In “Four years of Maidan myths,” written on January 3, 2018, Cohen names the crisis the “seminal political event of the early 21st century” (p. 143).

I agree: it is seminal because, essentially, the conflict is not about Ukraine per se, but, rather, whether America will have its way with determining who will rule the world. Everyone is to submit, assume their designated place in the hierarchical order of being. America is the Big Teacher; the rest of us immature pupils. But this teacher carries a mighty club to bash us into smithereens if we do not play by the rules.

Cohen is a prophetic voice in global critical discourse. The pro-American, anti-Russian coup in 2014 drew this comment: “The events of 2014 also led to NATO’s ongoing buildup on Russia’s western border, in the Baltic region, yet another new Cold War front fraught with the possibility of hot war. Making things only worse, in late 2017, the Trump administration announced it would supply the Kiev government with more, and more sophisticated, weapons, a step even the Obama administration, which played a large detrimental role in the 2014 crisis, declined to take” (ibid.).

Right this moment as I write, the nihilistic Biden administration is pouring $40 billion into arming Ukraine: the war is now hot, intensely so. And hotter the war gets, the more unstable the entire world becomes. Every day, it seems, a new menacing threat to expand the war against Russia pops up: Sweden and Finland are considering joining NATO. Poke the bear is the name of this awful global war. Poke too hard and too long and set the world afire. Squeeze the bear so it can no longer breathe.

Cohen states that there are two conflicting narratives of the Ukrainian crisis. Washington and the US-backed government in Kiev promotes—as most of us now know—blames only “aggression” in the Kremlin—“especially by Russian President Putin.” Moscow and the rebel forces in eastern Ukraine, which it supports, “blames ‘aggression’ by Washington and the European Union” (ibid.). These sorts of conflict certainly stir up a whirlpool of misperceptions and poisonous thoughts. But Cohen states that “on balance Moscow’s narrative, almost entirely deleted from US mass media, is closer to the historical realities of 2013-2014” (p. 144). I think that all this animosity heaped on Russia is so over-the-top, so out of proportion to Russia’s actual actions—in fact, the real object of world disparagement ought to be the twentieth and twenty-first century mighty invading presence: the US hegemon. Inflate the alleged crimes of others; to hide one’s own. Heap on the vitriol before everyone finds the truth about your own crimes against humanity.

Maidan Square was not a democratic revolution

Cohen points out that labelling the Maidan Square events as a “democratic revolution” (p. 144) is a tenacious myth. Not much of revolution – Cohen exclaims – the “oligarchic powers that afflicted Ukraine before 2014 remain in place four years later, along with their corrupt practices.” Moreover, “As for ‘democratic,’ removing a legally elected president by threatening his life, as happened to Viktor Yanukovych in February 2014, did not qualify. Nor did the preemptory way the new government was formed, the constitution changed, and pro-Yanukovych parties banned. Yanukovych’s overthrow involved people in the streets, but it was a coup” (ibid.). A related myth persists, to this day, that Yanukovych sent the snipers that killed some 80 or more protestors. It has “now been virtually proven that the shooters were instead from Right Sector, a neo-Nazi group that was among the protesters on the square” (ibid.).

Cohen states that in 2018 President Poroshenko was “intensely unpopular at home….The government remains pervasively corrupt. Its Western-financed economy continues to flounder. And for the most part, Kiev still refused to implement its obligations under the 2015 Minsk II peace accords, above all granting the rebel Donbass territories enough home rule to keep them in a unified Ukrainian state” (ibid.). The mainstream media will never ever inform citizens that Poroshenko’s government (and Zelensky’s today) “remains semi-hostage to armed ultranationalist battalions, whose ideology and symbols include proudly neo-fascist ones—forces that hate Russia and Western ‘civilizational’ values, to which Maidan was said to aspire, almost equally. The Donbass rebel ‘republics’ have their own ugly traits, but they fight only in defense of their own territory against Kiev’s armies and are not sponsored by the US government” (ibid.).

Taking orders from the US

In 2018 Cohen also perceived the danger that “Kiev’s wobbly regime will interpret the American arms as a signal from Washington to launch a new offensive against Donbass in order to regain support at home, but which is likely to end again in military disaster for Kiev. If so, it could bring neo-fascists, who may acquire some of the American weapons, closer to power and the new US-Russian Cold War closer to direct war between the nuclear superpowers. (US trainers will need to be sent with the weapons, adding to the some 300 already there. If any are killed by Russian-backed rebel forces, even unintentionally, what will be Washington’s reactions?) (p. 145).

Stephen raises his hands in utter dismay: why in God’s name was the Trump administration now promising to supply Kiev with weapons? Well, the pretext was to, what else, deter Putin from ‘further aggressive against Ukraine, for which he has shown no desire or intention whatsoever. Nor does it make any geopolitical sense. Neighbouring Russia can easily upgrade its weapons to the rebel provinces” (ibid.). Why did Trump, who wanted to co-operate with Russia, take such a “reckless step”? Cohen thinks that it is most likely true that he was trying to “disprove Russiagate allegations that he is a lackey of the Kremlin—accusations he hears and reads daily not only from damning commentary on MSNBC and CNN, but from the once-distinguished academic Paul Krugman, who told his New York Times readers on November 17, 2017: ‘There’s really no question about Trump/Putin collusion, and Trump in fact continues to act like Putin’s puppet” (ibid.).

Language from the Orwellian playbook

Notice the language choice (“no question,” “in fact,” “continues,” and “puppet”)–right out of Orwell’s playbook. In fact, Cohen says that there is every “’question’ and as yet no ‘in fact’ at all” (ibid.). Do the think tankers dream this stuff up over whiskies in their back rooms? “Hey, how would this work?” Guffaws fill the  room. Then from a corner of the room comes the suggestion. “Why don’t we invent a fictional story that Putin hacked the DNC and sent the emails to put Trump in the White House?” Guffaws fill the room. They all scurry out to start fixing the scurrilous narrative in place.

Cohen draws this critical insight from Trump’s desperation to escape allegations that he is a “treasonous” president. He states that if the media wanted a “dubious narrative,” they might focus on former vice president Joe Biden. “Biden, who is clearly already seeking the 2020 Democratic presidential nomination, bears a heavy responsibility for the four-year-old Ukrainian crisis, though he shows no sign of any rethinking or remorse” (ibid.). Four years down the road this accusation holds true.

Cohen reminds us, too, that “Biden and his coauthor, Michael Carpenter, string together a medley of highly questionable, if not outright false, narratives regarding ‘How to stand up to the Kremlin,’ many involving the years he was vice president. Along the way, Biden repeatedly berates Putin for meddling in Western elections. This is the same Joe Biden who told Putin not to return to the Russian presidency during Obama’s purported ‘reset’ with then President Dmitri Medvedev, and who, in February 2014, told Ukraine’s democratically elected President Yanukovych to abdicate and flee the country” (p. 146). And this same Joe Biden is doing some damn serious meddling in 2022 in that country on Russia’s border. Putin detests Joe Biden—one can understand why.