Wealthy Nations are Carving up Space and Its Riches 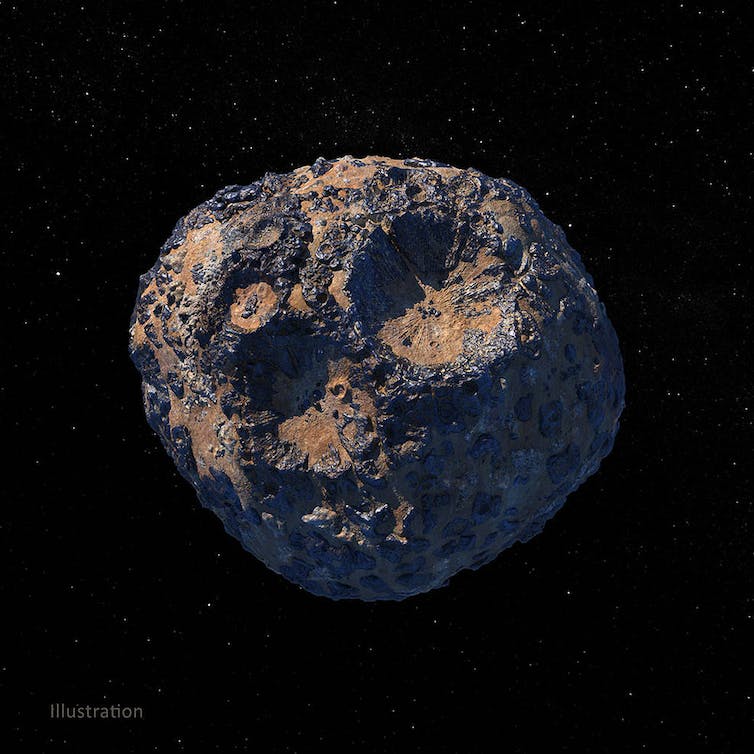 Asteroids contain mind-boggling amounts of valuable metals – like 16 Psyche, seen here, which holds massive reserves of US$10 quintillion worth of iron. NASA/JPL-Caltech

I am a research fellow at Arizona State University, studying the wider benefits of space and ways to make it more accessible to developing countries. 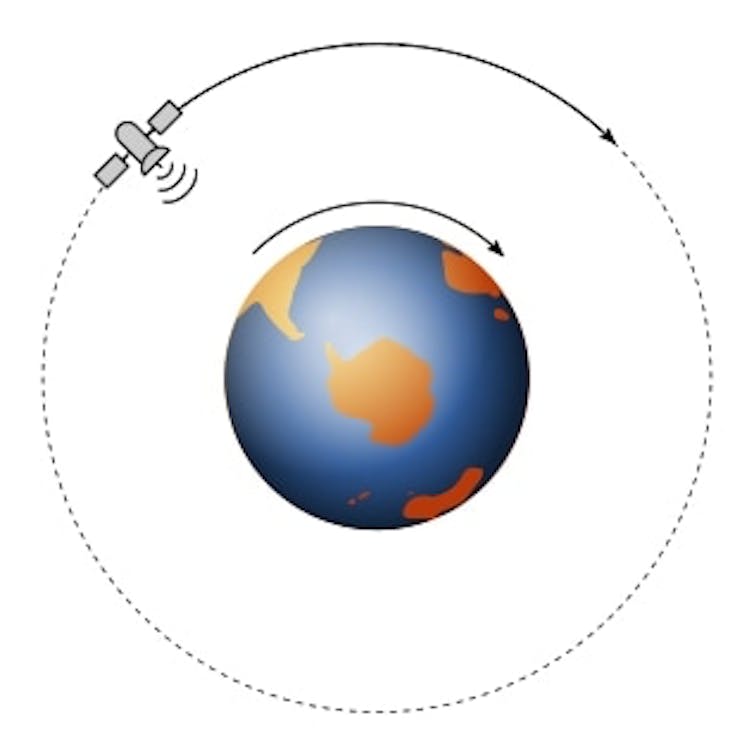 Geostationary orbits, where a satellite stays above a single point along the Earth’s equator, are very valuable. But there is only enough room for 1,800 satellites in this orbit, and many of these slots are already taken or spoken for.MikeRun/Wikimedia Commons, CC BY-SA.

Inequity is already playing out in access to satellites. In the not-so-distant future, the ability to extract resources from the Moon and asteroids could become a major point of difference between the space haves and have-nots. As policies emerge, there is the risk that these inequities become permanent.

Where to park a satellite

Thanks to the rapid commercialization, miniaturization and plummeting costs of satellite technology in recent years, more countries are able to reap the benefits of space.

CubeSats are small, cheap, customizable satellites that are simple enough to be built by high school students. Companies such as SpaceX can launch one of these satellites into orbit for relatively cheap – from $1,300 per pound. However, there are only so many places to “park” a satellite in orbit around Earth, and these are quickly filling up.

The best parking is in geostationary orbit, around 22,250 miles (35,800 kilometers) above the equator. A satellite in geostationary orbit rotates at the same rate as Earth, remaining directly above a single location on Earth’s surface – which can be very useful for telecommunications, broadcasting and weather satellites.

There are only 1,800 geostationary orbital slots, and as of February 2022, 541 of them were occupied by active satellites. Countries and private companies have already claimed most of the unoccupied slots that offer access to major markets, and the satellites to fill them are currently being assembled or awaiting launch. If, for example, a new spacefaring nation wants to put a weather satellite over a specific spot in the Atlantic Ocean that is already claimed, they would either have to choose a less optimal location for the satellite or buy services from the country occupying the spot they wanted.

Orbital slots are allocated by an agency of the United Nations called the International Telecommunication Union. Slots are free, but they go to countries on a first-come, first-served basis. When a satellite reaches the end of its 15- to 20-year lifespan, a country can simply replace it and renew its hold on the slot. This effectively allows countries to keep these positions indefinitely. Countries that already have the technology to utilize geostationary orbit have a major advantage over those that do not.

While geostationary orbital slots are the most useful and limited, there are many other orbits around Earth. These, too, are filling up – adding to the growing problem of space debris. 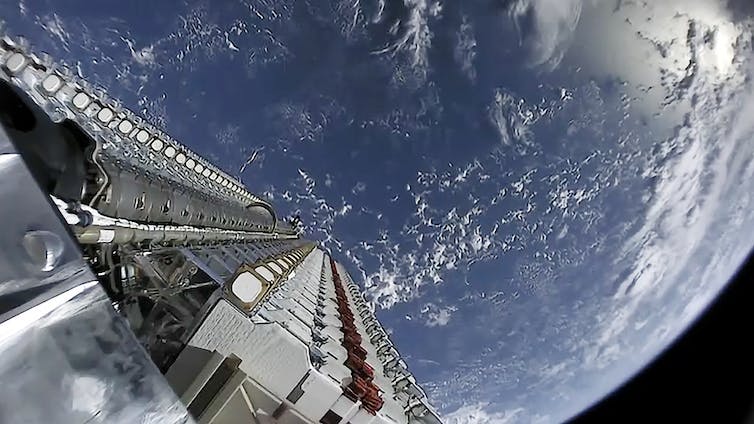 Companies like SpaceX and Blue Origin are planning to put thousands of satellites in orbit – as seen in the photo of 60 SpaceX Starlink satellites about to detach from a rocket. SpaceX/Flickr.

Low Earth orbit is around 1,000 miles (1,600 km) above the surface. Satellites in low Earth orbit are moving fast in a highly congested environment. While this may be a good place for Earth imaging satellites, it is not ideal for single communication satellites – like those used to broadcast television, radio and the internet.

Low Earth orbit can be used for communications if multiple satellites work together to form a constellation. Companies like SpaceX and Blue Origin are working on projects to put thousands of satellites into low Earth orbit over the next few years to provide internet across the globe. The first generation of SpaceX’s Starlink consists of 1,926 satellites, and the second generation will add another 30,000 to orbit.

Orbital slots are an area where inequity exists today. The future of space could be a gold rush for resources – and not everyone will benefit.

Asteroids hold astounding amounts of valuable minerals and metals. Later this year, NASA is launching a probe to explore an asteroid named 16 Psyche, which scientists estimate contains over US$10 quintillion worth of iron. Tapping huge resource deposits like this and transporting them to Earth could provide massive boosts to the economies of spacefaring nations while disrupting the economies of countries that currently depend on exporting minerals and metals.

Another highly valuable resource in space is helium-3, a rare version of helium that scientists think could be used in nuclear fusion reactions without producing radioactive waste. While there are considerable technological obstacles to overcomebefore helium-3 is a feasible energy source, if it works, there are enough deposits on the Moon and elsewhere in the solar system to satisfy Earth’s energy requirements for several centuries. If powerful spacefaring countries develop the technology to use and mine helium-3 – and choose not to share the benefits with other nations – it could result in lasting inequities.

Existing international space laws are not well suited to handle the complicated web of private companies and nations competing for resources in space. Countries are organizing into groups – or “space blocs” – that are uniting on goals and rules for future space missions. Two notable space blocs are planning missions to set up bases and potential mining operations on the Moon: the Artemis Accords, led by the U.S., as well as joint Chinese and Russian plans.

Right now, the major players in space are establishing the norms for exploiting resources. There is a risk that instead of focusing on what is best for everyone on Earth, competition will drive these decisions, damaging the space environment and causing conflict. History shows that it is hard to challenge international norms once they are established.

Access to space is critical for the functioning of a modern nation. Space access will only become more important as humanity rapidly advances toward a future of space hotels and colonies on Mars.

The 1967 Outer Space Treaty, the founding document of space law, says that space should be used “for the benefit and in the interests of all countries.” The policies taking shape today will dictate whether this is the case in the future.