The Reagan and Biden Booms

In the general telling of popular history, the Reagan years were a period of a booming economy and general prosperity. Reagan was of course reelected in a landslide. And, for the only time since Calvin Coolidge, he was succeeded by an elected president of his own party.

In spite of the celebration of the Reagan economy, most workers actually lost ground in the 1980s. Their wages did not keep pace with inflation. And, unlike the current situation, where a war is pushing up the world price of oil and other commodities, in the 1980s world oil prices declined sharply from peaks reached following the Iranian revolution. 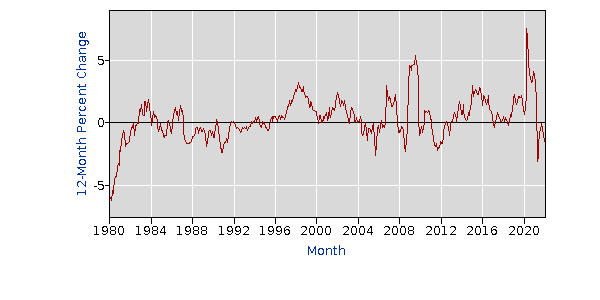 The inflation adjusted average hourly wage was 1 cent lower in January 1985, the end of Reagan’s first term, than it had been when he took office in 1981.[1] The rate of decline accelerated in Reagan’s second term so that in January 1989 it was 1.7 percent lower than when Reagan took office. This means that over his two terms in office, rather than sharing in the gains from growth, workers actually lost ground.

This history provides a notable contrast to the current situation. The media were happy to completely ignore the reality of declining real wages throughout the Reagan era. By contrast, they are happy to jump on a drop in real wages in the last year due to the reopening from the pandemic (the jump in inflation is worldwide) and the war in Ukraine.

The focus on inflation in reporting has been so intense that most people tell pollsters that they think we lost jobs last year, even though it was the strongest year for job growth ever. I’m an economist, not a psychologist, I don’t know how people form their views of the economy. But I can say that the media have not been giving an accurate picture of the economy, nor one that is consistent with their reporting during the Reagan era.

[1] This is for production and non-supervisory workers, a group that comprises roughly 80 percent of the workforce.