Planting season for corn and soybeans across the U.S. will begin as soon as March in Southern states and then move north. As farmers plant, they will deploy vast quantities of insecticides into the environment, without ever spraying a drop.

Almost every field corn seed planted this year in the United States will be coated with neonicotinoids, the most widely used class of insecticides in the world. So will seeds for about half of U.S. soybeans and nearly all cotton, along with other crops. By my estimate, based on acres planted in 2021, neonicotinoids will be deployed across at least 150 million acres of cropland – an area about the size of Texas.

Neonicotinoids, among the most effective insecticides ever developed, are able to kill insects at concentrations that often are just a few parts per billion. That’s equivalent to a pinch of salt in 10 tons of potato chips. Compared with older classes of insecticides, they appear to be relatively less toxic to vertebrates, especially mammals.

But over the past decade, scientists and conservation advocates have cited a growing body of evidence indicating that neonicotinoids are harmful to bees. Researchers also say these insecticides may affect wildlife, including birds that eat the coated seeds.

As an applied insect ecologist and extension specialist who works with farmers on pest control, I believe U.S. farmers are using these insecticides far more heavily than necessary, with mounting harm to ecosystems. Moreover, our ongoing research indicates that using farming strategies that foster beneficial, predatory insects can greatly decrease reliance on insecticides.

Most neonicotinoids in the U.S. are used as coatings on seeds for field crops like corn and soybeans. They protect against a relatively small suite of secondary insect pests – that is, not the main pests that typically damage crops. National companies or seed suppliers apply these coatings so that when farmers buy seeds they just have to plant them. As a result, surveys of farmers indicate that about 40% are unaware that insecticides are on their seeds.

The share of corn and soybean acreage planted with neonicotinoid-coated seeds has increased dramatically since 2004. From 2011 to 2014, the amount of neonicotinoids applied to corn doubled. Unfortunately, in 2015 the federal government stopped collecting data used to make these estimates.

Unlike most insecticides, neonicotinoids are water soluble. This means that when a seedling grows from a treated seed, its roots can absorb some of the insecticide that coated the seed. This can protect the seedling for a limited time from certain insects.

But only a small fraction of the insecticide applied to seeds actually enters seedlings. For example, corn seedlings take up only about 2%, and the insecticide persists in the plant for only two to three weeks. The critical question: Where does the rest go? 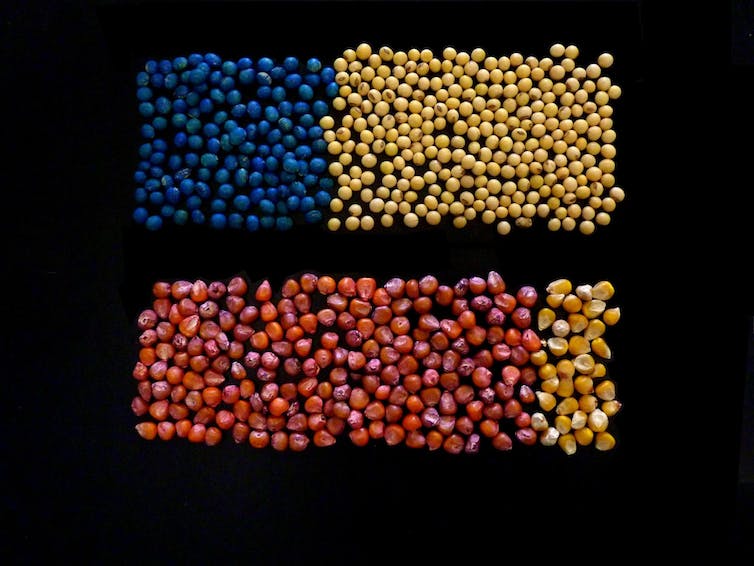 One answer is that leftover insecticide not taken up by plants can easily wash into nearby waterways. Neonicotinoids from seed coatings are now polluting streams and rivers across the U.S.

Studies show that neonicotinoids are poisoning and killing aquatic invertebrates that are vital food sources for fish, birds and other wildlife. Recent research has connected use of neonicotinoids with declines in the abundance and diversity of birds and the collapse of a commercial fishery in Japan.

Neonicotinoids also can strongly influence pest and predator populations in crop fields. In a 2015 study, colleagues and I found that use of coated soybean seeds reduced crop yields by poisoning insect predators that usually kill slugs, which cause serious damage in mid-Atlantic corn and soybeans fields. Subsequently, we found that neonicotinoids can decrease populations of insect predators in crop fields by 15% to 20%.

Recently we found that these insecticides can contaminate honeydew, a sugary fluid that aphids and other common sucking insects excrete when they feed on plant sap. Many beneficial insects, such as predators and parasitic wasps, feed on honeydew and may be poisoned or killed by neonicotinoids. 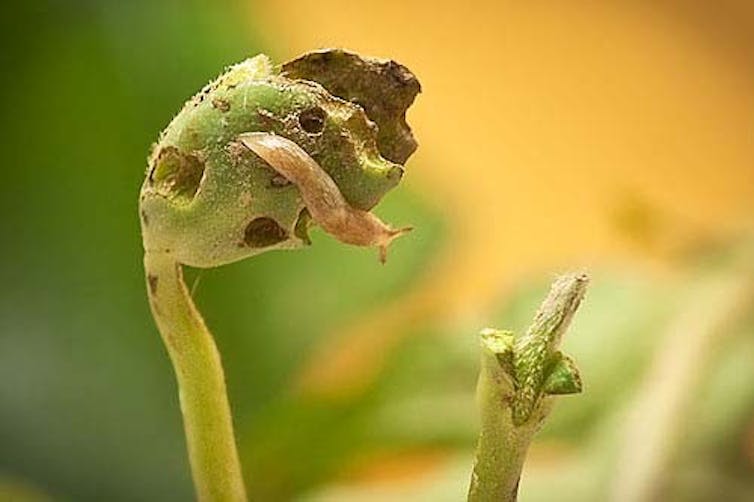 Slugs, shown here on a soybean plant, are unaffected by neonicotinoids but can transmit the insecticides to beetles that are important slug predators. Nick Sloff/Penn State University, CC BY-ND.

Neonicotinoid advocates point to reports – often funded by industry – that argue that these products provide value to field crop agriculture and farmers. However, these sources typically assume that insecticides of some type are needed on every acre of corn and soybeans. Therefore, their value calculations rest on comparing neonicotinoid seed coatings with the cost of other available insecticides.

[Get The Conversation’s most important coronavirus headlines, weekly in a science newsletter]

Does this mean that the U.S. should follow the European Union’s lead and ban neonicotinoids or adopt strict limits like those enacted in New Jersey?

As I see it, neonicotinoids can provide good value in controlling critical pest species, particularly in vegetable and fruit production, and managing invasive species like the spotted lanternfly. However, I believe the time has come to rein in their use as seed coatings in field crops like corn and soybeans, where they are providing little benefit and where the scale of their use is causing the most critical environmental problems.

Instead, I believe agricultural companies should promote, and farmers should use, integrated pest management, a strategy for sustainable insect control that is based on using insecticides only when they are economically justified. Recent research at Penn State and elsewhere reaffirms that integrated pest management can control pests in corn and other crops without reducing harvests.

Concerns about neonicotinoid-coated seeds are mounting as research reveals more routes of exposure to beneficial animals and effects on creatures they are not designed to kill. Agricultural companies have done little to address these issues and seem more committed than ever to selling coated seeds. Farmers often have very limited choice if they want to plant uncoated seeds.

Scientists are sounding the alarm about rising extinction rates worldwide, and research indicates that neonicotinoids are contributing to insect declines and creating more toxic agricultural lands. I believe it’s time to consider regulatory options to curb the ongoing abuse of neonicotinoid-coated seeds.