“We Will Be Kicked Out and No One Will Care” 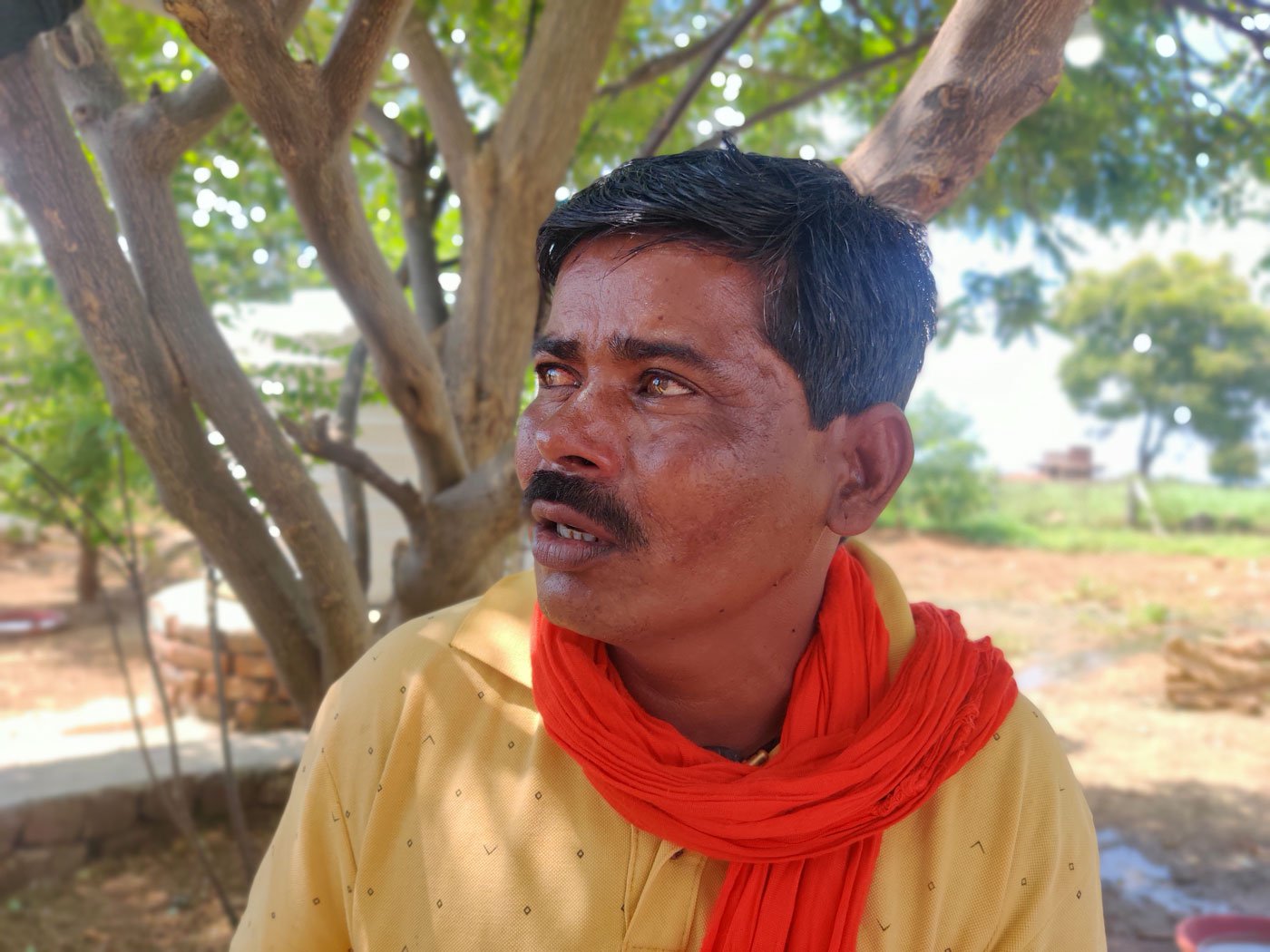 Vitthal Pawar made it through the Covid-19 lockdown last year, but it has become tougher for him to earn a living since then. Photo: Parth M.N.

The minute the lights went out in their hut that night in early October, Shobha Chavan’s family sensed that something was wrong. But before they could check, a group of men had barged in to mercilessly beat the family of eight with rods and sticks. An hour later, they were seven – Shobha’s two-year-old grandson was killed in the attack. They were six the next day, when Shobha’s injured husband died in hospital.

It was just before midnight when the attackers entered their home and thrashed, kicked and punched all members of the family – Shobha, 65, her 70-year-old husband Maruti, their son and daughter-in-law, grandson, granddaughter, a niece and Shobha’s sister-in-law. The family’s hut and sheepfold, located at the edge of their village in Maharashtra’s Beed district, were burnt down. Shobha described the events of that night in the first information report (FIR) she filed with the police.

“Three of us were raped that night,” adds Anita, Shobha’s 30-year-old married daughter. The attackers, she says, raped her, her 23-year-old sister-in-law and 17-year-old niece.

The violent mob marched to Anita’s hut, a kilometre from her mother’s, and terrorised her family in the dead of the night. “They reached our hut at around 2 [a.m.],” Anita says. “They wanted to drive us out of the village. We had a motorbike that was set on fire, and our livestock was stolen from us.” They torched her hut too.

When the accused were attacking the Chavan family, notes Shobha in the FIR, they kept saying: “You people are thieves. We don’t want you Pardhis living in our village.”

The Chavans belong to the Pardhi community, which is listed as a Scheduled Tribe in Maharashtra. The Pardhis were hunters once upon a time, but during the colonial rule, the community was notified as a ‘criminal tribe’ under the Criminal Tribes Act of 1871 (CTA). They were surveilled, called ‘criminals by birth’, and their movements restricted. When the Indian government repealed CTA, 198 ‘criminal tribes’ including the Pardhis were ‘de-notified’. But the legislation that replaced the CTA – Habitual Offenders Act of 1952 – didn’t help those communities shed the ‘criminal’ tag.

Stigmatised and deprived of education and employment, Pardhis have remained on the margins . Attacks on Beed’s Pardhi population of about 5,600 (Census 2011) have been rising in recent years. “The Pardhis are thought of as criminals even after so many years of Independence. This attack took place because of not wanting them in the village,” explains Siddharth Shinde, the lawyer representing Shobha Chavan’s case in the district court. And while the authorities didn’t want people to move about much because of Covid-19, these Pardhi families were being driven out of their homes.

Of the 10 accused – all from the dominant Maratha community – eight were arrested soon after Shobha filed the FIR. The police remand note says that they confessed to assaulting the Pardhi families “for troubling people in the village.” The case investigating officer and deputy superintendent of police, Vijay Lagare, did not respond to this reporter’s phone calls for more details.

One of the accused claimed that Shobha’s son, Kedar, had attacked him with a knife. Kedar did so, confirms Shide, adding that it was in retaliation to harassment. “The Pardhi families have endured harassment for years, which is why the fight erupted.” The attackers should have complained to the police, says the lawyer. “Instead, they attacked the family, killed two members and raped three women. All just to drive them out of the village.”

People in the village don’t like Pardhis owning land, says Shobha’s other son, Krishna. “We have two acres of farmland extending in front of our house, which is just outside the village. They don’t like that. About 4-5 years ago, they had attacked my father and fractured his hand. They accuse us of stealing livestock and file fake complaints to push us out. The police doesn’t cooperate with us on most occasions because of our reputation,” he explains.

Speaking to a Mumbai daily about the attack on the Chavan family, DySP Lagare referred to the victims as “history-sheeters”. A study on Pardhis in Mumbai city by researchers at the Tata Institute of Social Sciences (TISS) notes: “Several police officers have mentioned to us that their training manuals continue to characterise Pardhis and other denotified communities as perpetual thieves and bad characters.”

Pardhis mostly live on gairan , the grazing lands of the village. Some have received land titles from the government, but many have not. “We mostly survive on labour work. And we have been struggling after the [Covid] lockdowns. Such harassment on top of it gets too much to deal with,” says Krishna.

After the sudden Covid-19 lockdown in late March 2020, Pardhis have faced umpteen hardships . “Even in normal times, nobody trusted them easily for a job. After Covid, when jobs are few and takers are more, Pardhis are often the last choice. Society doesn’t let them be free during the day, and the police don’t allow it at night,” says Shinde, who focuses on cases of discrimination against marginalised communities.

The Pardhis look for daily wage jobs and migrate seasonally to chop sugarcane or work at brick kilns. Some move permanently to large cities like Mumbai and Pune. The TISS study observed that the lack of assets and occupational mobility, and “conditions of poverty perpetrated by regional underdevelopment and experience of routine harassment by police and villagers pushes Pardhi families out of their home community in the muluk [ancestral village] and to the city.”

In November 2020, when brick kilns in Beed reopened post lockdown, Vitthal Pawar from the small town of Sirsala in Parli taluka , enrolled to work. “All the brick kiln workers get an advance from the contractor, except us,” he says. “We get paid by the day [Rs. 300] just because we are Pardhis. Even though we have been trying to join themukhya pravah [mainstream] for years, we are treated as criminals.”

With no farmland to his name, 45-year-old Vitthal depends on farmers and brick kiln contractors for work. “But we are always looked at with suspicion,” he says. “For years, we have been trying to get acceptance from people in the village.”

During the Covid lockdowns in 2020, Vitthal’s family of five managed with the free ration supplied by the government. But survival has been difficult since then because labour work has been infrequent. Vitthal used to get 4-5 days of work in a week before the pandemic, but it is only 2-3 days now. His weekly income has reduced from about Rs. 1,200 to Rs. 600.

Adding to his problems is the eviction notice that he received in June this year. Ten families including Vitthal’s, who live on a patch of land along the Beed-Parli highway, have been told that their land is earmarked for a new Maharashtra Industrial Development Corporation project.

“Where will we go?” questions Vitthal. “When we asked the authorities, they said, ‘go anywhere you want.’”

His 60-year-old aunt, Gulam Bai, has been living in Sirsala with her family since four decades. But, even now, the villagers look at them with suspicion. “How will we be accepted or allowed to settle in a new place [if we move] when there is such lack of trust? That too, now, in Covid times?” she asks. “I have lived here for 40 years, but I am an ‘encroacher’ even now. Where will I go at this age?”

Though Vitthal and Gulam have ration cards and voter’s cards, and they even pay electricity bills, displacing them is easy for the administration because they don’t own the land on which they live.

In spite of several policies and land reform measures that were launched after Independence, governments have paid lip service to land distribution among the marginalised communities. Maharashtra government, in 2011, decided to stop regularising ‘encroachments’ of gairan land. The ‘encroachments’ mainly refers to occupation of land by Dalits and other deprived communities since the 1950s, after Dr. B.R. Ambedkar directed the Dalits to take over government lands. Ambedkar believed that owning land was necessary for Dalits to improve their economic situation.

“When we first came here, this land had random bushes and trees,” says Gulam. “But we worked on this land, tilled it, made it liveable and cultivable. Now we will be kicked out and no one will care.”

No one in the village cares that the surviving members of Shobha Chavan’s family feel threatened. After the attack on their homes in October, the family scattered in different directions. Shobha is with her other daughter, who lives 150 kilometres away. Kedar’s location is unknown. His phone is switched off and no one has seen him since the fatal night. Anita stayed back in the village after the attack, but when she got hostile glances from the villagers she escaped from there. Each wants to continue fighting the case. Will they pay a price for that, too? Time will tell.

Names of the family members assaulted in October have been changed to protect their identities.

This story is part of a series supported by the Pulitzer Center through an independent journalism grant to the reporter.