Concentration cattle and moving them frequently has been proposed as a means of storing carbon in soils. Like other claims that seem to be too good to be true, such assertions fail to do a full accounting of the carbon cycle. Photo George Wuerthner.

A recent New York Times article has latched on to the latest justification for livestock grazing-carbon storage. In the article titled Keeping cattle on the move and carbon in the soil the author celebrates how Montana ranchers by concentrating their cows and moving them frequently across their fields. This the ranchers assert, and author repeats, increase carbon storage in the soil, and thus contributing to a reduction in greenhouse gas emissions.  Like the Donut Diet (eat donuts and lose weight), and other claims that appear too good to be true, the idea that cattle grazing will reduce GHG emissions fails to do a full accounting of carbon resulting from livestock production.

These ranchers are practicing what is essentially a strategy popularized by Allan Savory, a Rhodesian who rose to prominence in the United States in the 1980s by claiming that the problem with rangelands is not too many cows, but not enough. Apparently, the writer is unaware that the regenerative livestock management program he describes as “new” has been around for decades, and has also been found to be unsuccessful.

Originally Savory claimed what rangelands needed to be healthy was more “hoof action” to pound soil crusts in what he termed were “brittle environment” or what we would call aridlands. Savory asserted these crusts prevented water infiltration, while ungrazed grasses were dying. One tenet of Savory’s methods was to crowd cattle into a limited space, and have them graze plants to the ground, then move them to another small area, while resting the previously grazed site.

Savory argued his method mimicked the movement of bison herds and if practiced religiously, would result in the economic and ecological restoration of the rancher’s bottom line and the landscape. One of the major problems with his analogy is the “brittle” landscapes he claimed would most benefit from his method such as the Great Basin of the western U.S. never had large herds of grazing animals. Plus cattle do not mimic bison in behavior or habitat use. 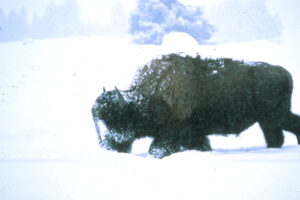 Bison behave differently from cattle. For one they can survive winter without any additional feed because they can digest lower quality forage than cattle. Photo George Wuerthner.

More recently, latching on to the concern about climate change, Savory argues that regenerative cattle grazing is the way to reduce Greenhouse gas emissions.

Savory’s claims were welcomed by western ranchers and ranch proponents who thought they had a justification for more cows. Savory was the equivalent of the Paiute spiritual leader Wovoka rose to fame in the 1880s. Wovoka advocated that tribes practice the Ghost Dance which he asserted would cause the white man to disappear. Desperate to see the white presence removed, many Indians practiced the dance, but it failed to halt the American expansion and came to a disastrous conclusion with the killing of Sioux warriors at Wounded Knee, South Dakota. Ultimately the Ghost Dance was based more on hope than reality. Savory was the rancher’s Wovoka. 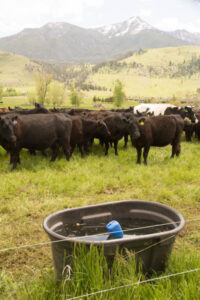 One of the problems with intensive regenerative livestock management is that it requires more fencing, more water development and more labor than traditional livestock methods. All of these add to the cost of operations. Photo George Wuerthner.

Most of Savory’s original claims were eventually discounted by researchers who found over and over that cattle hoof compacted soils, decreasing water infiltration and contributing to desertification. Another problem associated with Savory’s claims is that it requires intensive management of livestock. Cows often had to be moved every few days, increasing the labor time and costs for a rancher. Plus, the creation of small paddocks with fencing and water development necessary to concentrate the cattle was an additional cost. [i]

Savory’s latest claims and other rancher proponents for “regenerative” ranching have many of the same problems as in the past. In particular, his claims that livestock grazing can transfer and store carbon into the soil has come under scrutiny from numerous researchers.

This NYT article is another “happy talk” article where continued exploitation of the land just happens to fit the dominant economic interests. Note that the writer failed to note the following:

1. That in most cases the cows emit more methane than carbon that is stored in the soil. All these regenerative supporters fail to do a full accounting for the carbon cycle which includes the methane emitted by livestock digression. Across the globe, methane from livestock (blue color in the chart below) is a major component of GHG emissions. 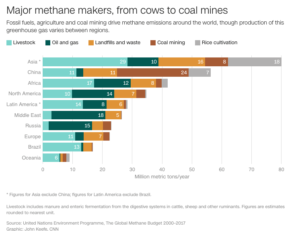 2. The amount of carbon that can be stored is not constant. You can store more carbon in degraded soils and rangelands. But after a while, you “fill up” the soil carbon and can’t add additional carbon. It’s like having a glass with water. It does not endlessly accept carbon.

3. Under cattle grazing, especially on the plains, grasses with shallow roots are favored by heavy grazing as advocated in the article. Since much of the carbon in grassland soils is stored in the roots, the carbon that is stored is shallow. Studies have shown that carbon in the top layers of the soil is often eliminated in drought years.

4. The idea that ranchers are emulating bison is misleading. For one bison numbers fluctuated dramatically depending on climate conditions. During drought years or harsh winters, their numbers could drop dramatically, or they might migrate hundreds or thousands of miles to other areas with better conditions. Ranchers can’t afford to modify their herds so significantly.

6. Moving cattle daily as described in the article is not something that most ranchers can afford to do since it is labor-intensive. It is never going to be widely adopted, just as Allan Savory’s methods were found to be uneconomical for most ranchers due to the costs of labor and infrastructure. (Note the author mentions that the government and/or conservation groups supplied the money for the additional fencing, water developments, etc. to facilitate the movement of cattle from pad to pad.

7. The impacts to wildlife are never mentioned. Are riparian areas being trashed? Are springs being “developed” to provide water to cattle? What about hiding cover for grouse and other wildlife–when grazed to the ground there is little cover left for wildlife. Are prairie dogs and coyotes being killed? Do all the fences built to facilitate cattle use inhibit wildlife migration or become “perches” used by avian predators to locate endangered wildlife like sage grouse? These are only a few of the collateral damage from livestock. Most western ranch operations rely on irrigated hay pastures to produce winter forage, which drains rivers, degrading aquatic ecosystems.

8. Like the Condos vs Cows debate this is framed as ranching is better than plowing up the prairie for a wheat field. It is better but that doesn’t mean it’s the best or only alternative to plowing. Plowing is increased in part due to Ag policies that provide subsidies for the production of certain products like wheat. Ending those subsidies would reduce the incentive to plow up prairies.

Plus even the ranchers are getting a lot of subsidies to be “regenerative” ranchers whether it is emergency livestock feed and other government programs. In many cases, all these subsidies cost more than simply buying the land and taking it out of production forever. If you want to talk about solutions, you have to put all the solutions on the table. This is almost never done.