Is this kind of damage from private livestock the kind of impact the National Park Service should permit? Photo George Wuerthner.

The final Record of Decision (ROD) on livestock operations management at Point Reyes National Seashore was released this week. Unfortunately, and as feared, it not only maintains the ongoing degradation of this national park unit by privately owned domestic livestock, but it expands the opportunities for a handful of ranchers to do even more damage to the public’s landscape with additional lands opened for grazing, as well as the planting of row crops.

As in the draft document, the final management plan proposes to kill the native Tule elk if their populations grow beyond what the ranchers believe (as the NPS jumps to) is undesirable. The public submitted some 50,000 comments opposed to continued ranching and the killing of rare native Tule elk. Point Reyes Seashore is the only national park where Tule elk exist. 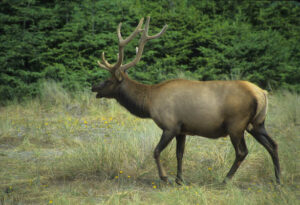 Tule elk are a rare subspecies of the animal only found in California, and Point Reyes is the only park that holds Tule elk. Photo George Wuerthner.

Among the impacts caused by the ongoing livestock operations is the pollution of the park’s waterways, increased soil erosion, the spread of exotic weeds, the transfer of park vegetation from wildlife use to consumption by domestic livestock,  the use of public facilities j(the ranch buildings, etc. are all owned by the U.S. citizens but are used just as if they were private property, hindering public access to its lands.

About one-third of the 71,000-acre national Seashore is designated a “pastoral zone,” where 15 ranch operations graze approximately 5700 cattle (more than ten times the number of Tule elk) on 28,000 acres of parkland as well as 10,000 acres in the adjacent Golden Gate National Recreation Area. A total of 24 ranches operate on these public lands.

Proponents of continued ranching/farming in the National Seashore argue that ongoing livestock operations maintain a “cultural” and “historic” landscape. Imagine if we applied these same criteria to other national park units. Domestic sheep once heavily grazed Yosemite. Redwood National Park’s old-growth forests were once logged. Fur trapping was once a prevalent occupation in Grand Teton National Park. Oil and gas exploration and operating wells were historically common in Glacier National Park. And, of course, the killing of wolves occurred in Denali and other park units. Gold mining was common in Yukon-Charley National Preserve. Should we permit these “cultural” and “historic” traditions to occur in these parks?

In the 1950s, seven NPS studies concluded that a national park unit in the Point Reyes peninsula would provide the vulnerable landscape from future development. Point Reyes is a spectacular landscape of open prairies and patches of woodlands home to 460 species, 876 plants, and many different marine and terrestrial mammals. In addition, the Seashore harbors a hundred listed rare, threatened, and endangered species, an incredible diversity given the Seashore’s relatively small size.

In 1962 when Point Reyes National Seashore was established, the federal government purchased the ranches found on the peninsula at fair market value. As a result, ranch owners received hundreds of millions of dollars. Some used the money to buy property in other parts of California so they could continue to farm. But some of the ranchers lobbied for and got a generous 25-year extension to operate using the publicly owned property. After that time, they were supposed to leave the park.

However, when the allotted time for vacating the public’s land, they balked and managed to get another extension. This lease extension has been repeated several times for nearly 60 years, and again the NPS is bucking to political pressure to extend the leases for another couple of decades.

This plan is in direct violation of the law creating the national Seashore. The legislation requires that Point Reyes National Seashore “shall be administered by the Secretary without impairment of its natural values, in a manner which provides for such recreational, educational, historic preservation, interpretation, and scientific research opportunities as are consistent with, based upon, and supportive of the maximum protection, restoration, and preservation of the natural environment within the area.” Therefore, permitting continued livestock operations in the park unit is not consistent with the stated legislative goals.

For more details on this arrangement, see my previous commentaries.

WHAT IS BEHIND THE NPS CAPITULATION? 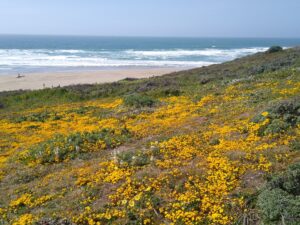 Point Reyes is one of the few portions of the California coast where natural processes and native species are supposed to be given priority. Still, unfortunately, the NPS is failing in its mission to do so. Photo George Wuerthner.

I am extremely disappointed in the National Park Service for this decision and that the Biden administration upholds it. I can only assume that there is an underlying political motivation. If we can’t maintain a national park unit as a sanctuary for wild nature, where can we?

One idea suggested to me is that Governor Gavin Newsom up for a recall vote put pressure on the administration to maintain the current dairy and livestock operations to avoid greater controversy for Democrats in general. Of course, I am not privy to any insider’s knowledge, but certainly endorsing private businesses and environmental destruction of public property for private financial gain is not the usual NPS management philosophy.

Western Watersheds Project, Center for Biological Diversity, and Resource Renewal Institute have previously sued to get the NPS to consider all the ecological values that are impaired and to follow the law. Let’s hope that a court will agree that the NPS is not following the legislative mandate to protect the park’s natural values and vacates this plan that is demeaning to the public and the reputation of the National Park Service.