I saw about a hundred people at the Primary Health Centre, Panamic, waiting for their Covid-19 vaccination jabs. It was August 11. Just like millions of other Indians across the country at thousands of such centres? Not quite. The highest point of Panamic block in Leh is listed as being 19,091 feet above sea level. The main village of the same name, though, is a few thousand feet lower. But even at around 11,000 feet, this PHC is still among the highest altitude vaccination centres anywhere.

Merely bringing and stocking the Covid-19 vaccines to most parts of the union territory of Ladakh is quite a feat. Not to forget the challenge involved for those having to reach the centre from remote places.

But there is more to this centre than its extraordinary altitude. Call it an extraordinary attitude. This PHC in Leh, nestled close to the Siachen Glacier, holds an unusual record: it vaccinated 250 army personnel in the region in a single day. That, while functioning with an internet connection not worth the name, and with very poor communication facilities. Yet the PHC Panamic, like some other centres across Ladakh, conducted its vaccination drive quite successfully.

But how do they manage without the internet in this PHC, about 140 km from Leh town? Tsering Anchok, the cold chain handler here, made it sound simple – “It’s easy!  We handled it with patience. We worked long hours, but in the end, we got it right.” Which means they laboured many hours over faulty net connections to do what took mere minutes elsewhere. And even more hours over the actual vaccination process. 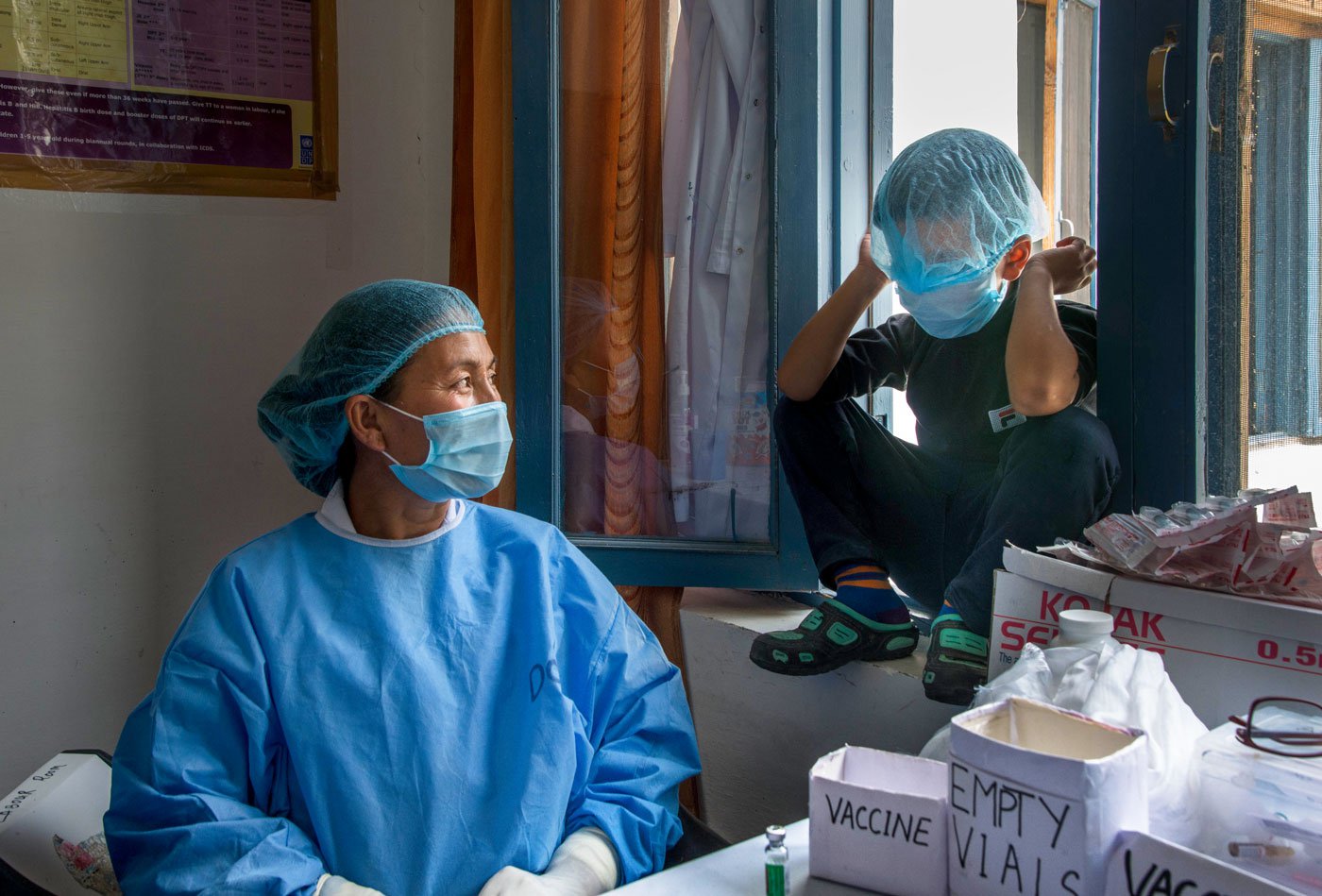 “I don’t want to get photographed,” said Jigmat Jorphal, the eight-year-old son of  Stanzin Dolma, a pharmacist at the PHC in Panamic. The little boy often accompanies his mother when she is on duty during vaccination drives. PHOTO: RITAYAN MUKHERJEE.

Stanzin Dolma, a pharmacist at this PHC, not only put in long hours, but often had to keep an eye at the same time on the eight-year-old following her around. “My younger son can’t stay away from me for too long,” she said. “So on days I have long working hours [especially vaccination days], I bring him with me. He remains in the PHC during the day. He even stays with me during night shifts.”

She is not unaware of the risk involved in having him around but is convinced she can look after him better this way. “Patients and my son – both are equally important to me,” she said.

The PHC’s resident doctor, Chabungbam Meiraba Meitei, who is from Manipur, recalled that “there was chaos in the beginning. We struggled to manage the system with little infrastructure and poor information. Eventually, we got a grip on the process, and simultaneously, raised awareness among villagers on why vaccination is essential.”

Ladakh was, like most parts of the country, badly hit by Covid’s ‘second wave.’ The spike appears to be linked to the constant movement of transport, arrival of seasonal labourers, and the return of Ladakhis working or studying outside the union territory, to Leh town.

“It was a crazy time,” Tashi Namgyal, district immunisation officer, Leh, said of the early pandemic period. “At that time, we didn’t have any proper infrastructure for testing so many people in Leh town. So we had to send samples to Chandigarh for testing. It took days to get a result. But now we can test up to 1,000 people here daily in Leh’s Sonam Nurboo Memorial Hospital. From the beginning of this year we planned to finish the vaccination before winter approaches – that is, before October ends.”

With health centres here having no stable internet and people having limited access to communication technologies, they had to find innovative ways of getting things done. “Older people don’t use smartphones. And there are internet problems too,” said Kunzang Chorol, a healthcare worker from Khaltse, a village in Leh district that is 9,799 feet above sea level. So how did they handle that? 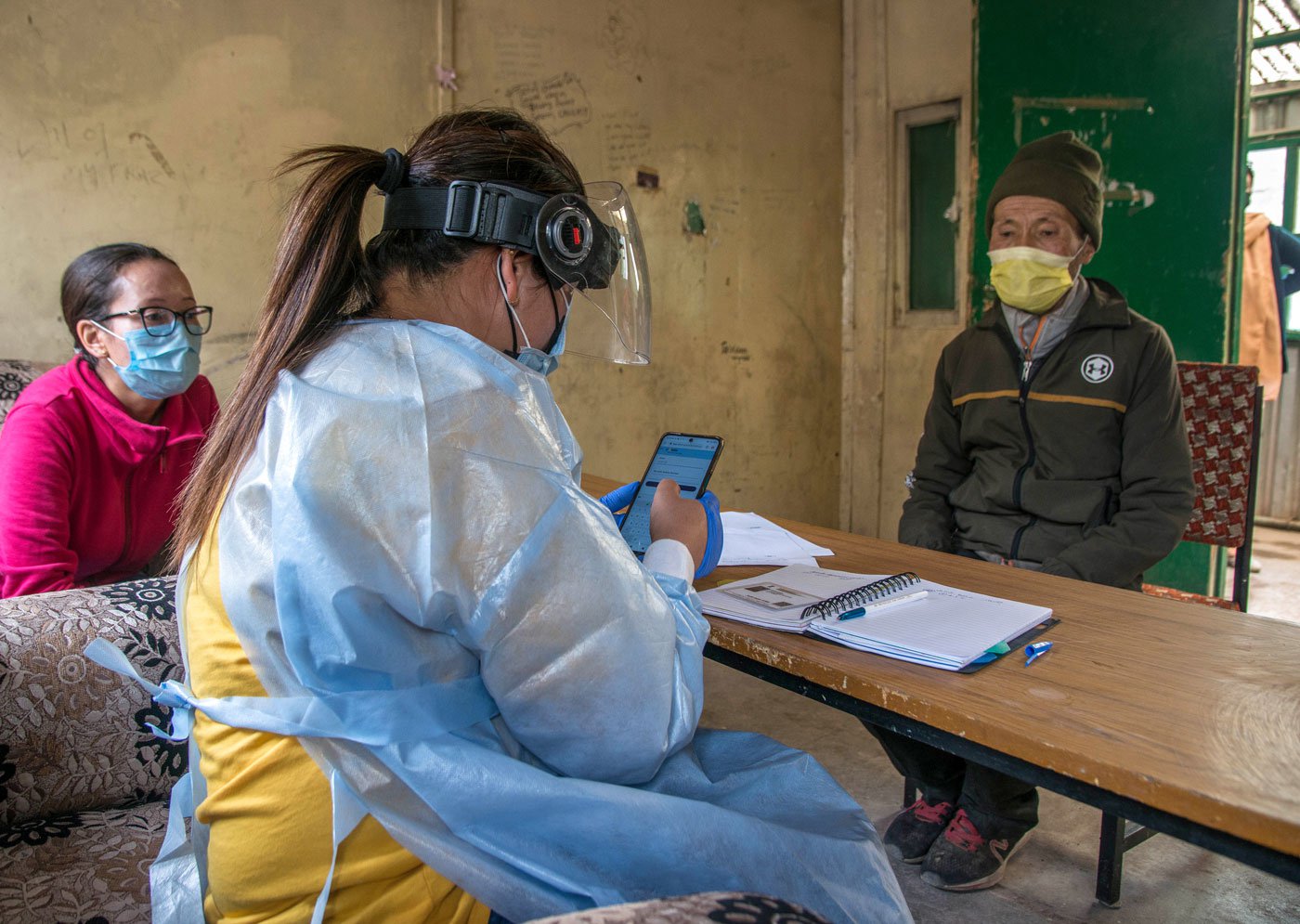 Kunzang Chorol, who works as a physiotherapist at a PHC in Khalsi tehsil, registers a patient’s details on the Cowin app in Khaltse village. PHOTO: RITAYAN MUKHERJEE

‘Kuney’ as Kunzang is called around here, said: “After the first dose, we wrote down the unique numbers and the date for the second dose of the vaccine on paper. We then pasted that chit of paper on the back of people’s valuable documents. Like on their Aadhaar card, for example. This is how we managed the entire process. And to date, it has worked well for the villagers.”

“After the shots, we printed the vaccination certificates and handed it over to them,” she added.

At a time when health centres and hospitals were focusing all their resources on fighting the pandemic, I found, to my astonishment a PHC in Fiang village carrying out routine immunisation services for children alongside the vaccine drive. Fiang is 12,000 feet above sea-level.

Now, the claims made by the administration of Union Territory of Ladakh – of 100 per cent of its eligible population having received the first dose of Covid-19 vaccine – may be open to challenge . What remains beyond question, though, is the inspiring role of its frontline health workers traversing this challenging mountainous terrain. They struggled to carry the vaccines to Ladakh’s approximately 270,000 inhabitants living at altitudes ranging from 8,000 to 20,000 feet in a climate that is perennially cold and dry.

“For us,” said Jigmet Namgiyal, a vaccine and cold chain manager in Leh, “the challenges were enormous. In the initial days, we had to get used to Cowin. And many of the remote PHCs like the one at Panamic have no stable internet.” Namgiyal often travels more than 300 kilometres in the cold desert to ensure that vaccines are stockpiled at the proper temperatures and available in the right quantities at various storage points. 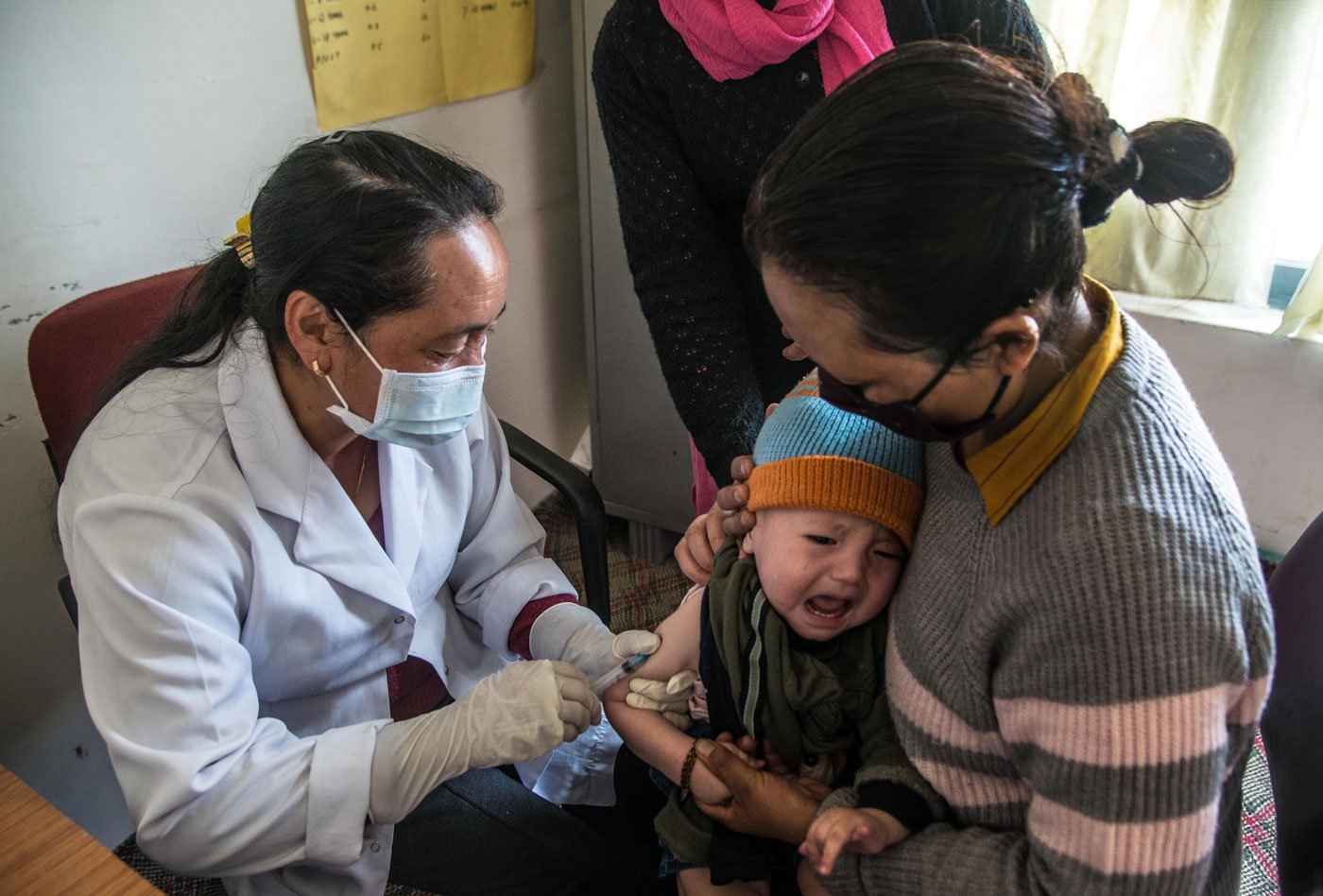 A t the PHC in Fiang – 12,000 feet above sea level – doctors have been conducting immunisation services for children alongside the vaccine drive. PHOTO: RITAYAN MUKHERJEE.

“Oh, not only Cowin, but the principal challenge was also regarding vaccine wastage,” said Deachen Angmo, who works at a PHC in Khalsi tehsil . “There’s a strict instruction from the central government that vaccines should never be wasted.”

The challenge, pointed out Angmo, “is massive. We can give ten shots from one vial. But once we open a vial, it must be fully utilised within four hours from its first use. In remote villages like ours in Khaltse, we often see only four or five people turning up in a four-hour session, as they travel from really distant regions. So the chances of wastage are higher. To avoid that, many of my colleagues travelled to these villages a day before and ensured that people would arrive at the PHC on time. A very tedious process, but it worked. As a result, we don’t have any vaccine wastage.”

I came to know later that the healthcare staff in Khalsi even flew with vaccines to a remote village named Lingshet, which falls within this tehsil . Dr. Padma, a gynaecologist who was in charge of vaccination for the day, said, “there’s an initial hesitation among villagers regarding vaccines, but through our ongoing counselling, they realised the importance. Now we hold the record of vaccinating 500 people in a day. And we achieved it as a team.”

“I am amazed,” said Jigmet Namgiyal, “to see how the nurses, pharmacists, doctors, overcame the challenges and made the drive successful. At the moment, we are vaccinating not only the people of Ladakh union territory, but also the seasonal migrant labourers, Nepalese workers and even unvaccinated tourists coming from other states.”

That is no idle boast. I met a group of seasonal migrant labourers from Jharkhand who were laying a road nearby to the Panamic PHC. “We are thankful we are here in Ladakh,” they told me. “We have all had our first doses. Now we are waiting for the second shots. So by the time we go back to our homes, we will have immunity against Covid. And we can keep our families safe.”