Two of over 12,000 spring Chinook salmon that died in Butte Creek before spawning. Photo by Allen Harthorn, Friends of Butte Creek.

In an extreme drought year where nearly all juvenile Sacramento River winter run Chinook salmon are expected to die before spawning due to alleged water mismanagement by the state and federal governments, the return of a record run of adult spring run Chinook salmon on Butte Creek this year was welcome news.

But it didn’t stay that way.

A record run of over 18,000 spring Chinook has returned to Butte Creek, a Sacramento River tributary, the second largest since 20,000 fish ascended the creek in 1998, according to the California Department of Fish and Wildlife, or CDFW. Allen Harthorn, Executive Director of Friends of Butte Creek, estimates the size of this year’s run to be even larger, around 25,000 fish.

Yet this has all changed recently. The potential of a successful spawn becomes increasingly dim as thousands of adult spring run salmon on Butte Creek die before spawning.

“Disaster is really hitting home on Butte Creek, where over 12,000 adult spring run salmon have died prematurely,” said Harthorn. “There may be only a few thousand left to spawn if we’re lucky.”

The CDFW detailed in their latest snorkel survey report on the creek that 12,370 salmon have died before spawning from June 1 to July 27, 2021.

“The water is so turbid and they are so busy counting carcasses they can’t get a good estimate of how many fish are left,” noted Harthorn.

The fish deaths were caused by heat-related oxygen deficiency and the outbreak of two fish diseases, ich and columnaris, as a result, according to the CDFW pathologist report. These two diseases were the same ones that killed over 38,000 adult fall run Chinook salmon on the lower Klamath River on the Yurok Reservation in September 2002.

Spring run are a distinct run of Chinook salmon that have evolved over millions of years to ascend the high elevation tributaries of the Sacramento River to spawn every spring. They are river-maturing fish that don’t spawn until fall.

Some of the last best habitat for wild spring Chinook salmon exists in the eastern tributaries of the Sacramento River, including Battle Creek, Mill Creek, Deer Creek and Butte Creek, where they spawn up to 5,000 feet in elevation. These fish have been for decades protected from recreational angling once they enter the tributaries, but they still face other key stressors, according to California Trout.

At this time, since a number of dams have been already removed on the creek, the key factor leading to the fish kill and stopping the restoration of the wild Chinooks is the continued operation of the PG&E hydroelectric project and other water diversions.

PG&E’s De Sabla/Centerville project brings West Branch Feather River water over the mountain from Phillbook Reservoir and Round Valley Reservoir to Butte Creek to be used for hydroelectric power.

“I’m still processing this fish kill,” said Harthorn. “It’s mind-boggling. The agencies’ refusal to hold PGE&E’s feet to fire is pathetic – they need to get this hydroelectric project out of the way. They have been pussyfooting for years about installing a temperature control device at DeSabla Reservoir. We have to seriously talk about getting fish into cold water upstream and PG&E out of the way.”

The solution is to get the salmon into the upper creek habitat all of the way to Butte Meadows, according to Harthorn.

“We have to allow fish to swim into the upper watershed and make sure that the water is cold by not diverting it out of the stream,” stated Harthorn. “What a tragedy it is to lose so many fish when there’s available habitat and available water and a failing PG&E hydroelectric system is the only thing in the way.”

He added, “If we get PG&E out of the way – and release the full flow of Butte Creek, now about 75 cfs at Butte Head Dam – that habitat may very well support hundreds if not thousands of spring salmon. Water temperatures are much colder upstream than where they are holding.” 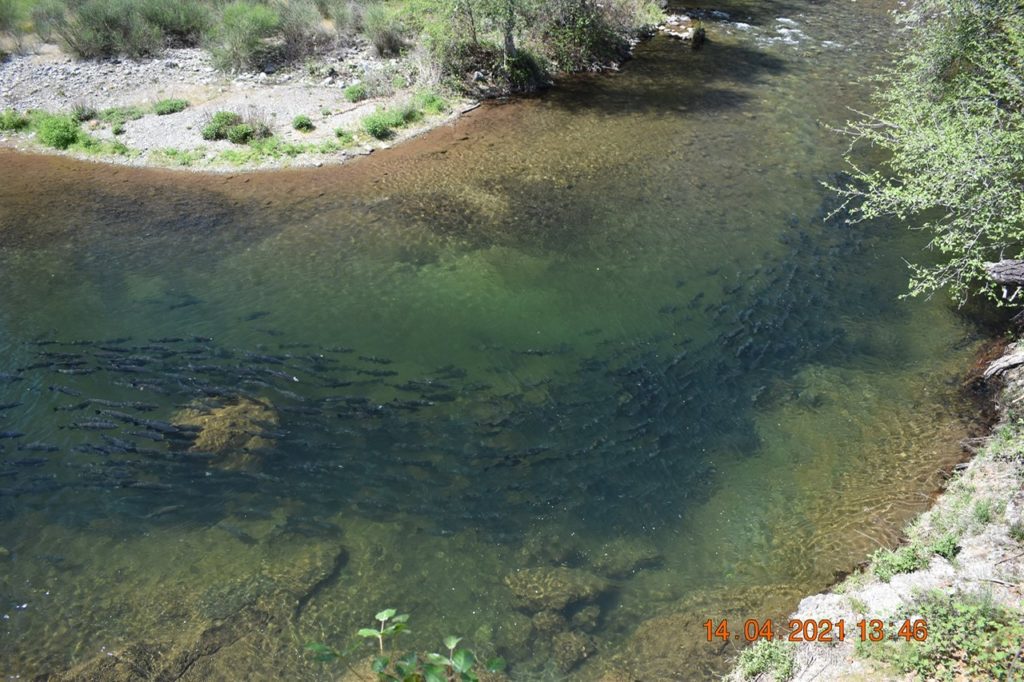 Over 18,000 endangered spring run Chinook salmon moved up Butte Creek this year. This photo shows a huge school of salmon in just one small area of the creek on April 15, long before the fish kill. Photo by Allen Harthorn, Friends of Butte Creek.

Harthorn noted that PG&E is diverting 90 percent of the flow at Butte Head Dam for “very minimal” hydroelectric production.

On February 2, 2017, PG&E announced that it was withdrawing its application for a new license for the project from the Federal Energy Regulatory Commission, citing “California’s changing energy landscape and rising operating costs” at the Desabla-Centerville facility.” In a statement, the company said the facility is “no longer economically viable for PG&E’s electric customers.”

“This is real spring run habitat, with real wild fish and real protection,” Harthorn stressed. “When it comes to expanding habitat, this is probably the best path possible to expand salmon habitat in California. Prior to the fish kill, we had over 18,000 fish knocking at the door, with no trucks involved and no recapturing of juveniles needed. It’s a wild system that operates the way it should, but we have to get the hydroelectric project out of the way.”

The record year for spring run Chinook salmon was in 1998, when over 20,000 spring chinook entered the creek, making this the second biggest year, according to the CDFW.

Harthorn has a theory for why Butte Creek saw such a big run this year — the added sediment in the runoff from the Camp Fire gave the salmon smolts cover from predators as they moved downstream into Butte Slough, Sutter Bypass and the Sacramento River on their journey to the ocean.

“Most of these fish are three-year-olds, the juvenile fish that began emerging from the gravel in November 2018,” he explained. “That was the year the Camp Fire broke out and raged across Paradise and the Butte Creek Canyon, destroying over half of the homes in the canyon. Because of the destruction, 150 homes were reduced to toxic rubble. We were wondering what would happen to the juvenile fish when the stuff washed into the creek.”

He went on, “There was an organized effort to distribute and place erosion control materials along 75 homes burned out on Butte Creek. Despite these efforts, there was a tremendous amount of toxic runoff. Most agency people feared all would be destroyed. But instead what we saw is perhaps the largest run in memory.”

To get to their spawning grounds, spring Chinook swim up from the Sacramento River through Sutter Bypass into Butte Slough, which runs into Butte Creek. A major fish kill in Sutter Bypass took place this March, when over 100 springers died when the water into the bypass was shut off.

The spring Chinook also swam upriver to the Butte Slough outfall gate below Colusa on the Sacramento River. They bashed their heads against the outfall gates for weeks before the Department of Water Resources opened the gate in late March, under pressure from the NorCal Guides and Sportsmen’s Association. “Once the gates opened, we saw fish with scars on their heads by the hundreds,” said Harthorn.

The temperature gage at Butte Creek near Chico is about four miles above Highway 99, one mile below the covered bridge, downstream of where most of the fish are holding. Temperatures at the gage have generally been running between 70 and 80 degrees.

Conservationists hope the creek will recover from this year’s avoidable disaster, and this will spur the agencies to get serious about protecting endangered fish.

“If anybody is looking where to expand habitat for spring Chinook, they need to look at Butte Creek. We have the habitat and we have the wild fish,” emphasized Harthorn.

“We are stunned to learn that over 12,000 adult spring run salmon have died pre-spawn on Butte Creek. We are hoping some hardy fish will make it through; the water is getting cooler,” he concluded.

Friends of Butte Creek is currently conducting a GoFundMe campaign to raise money to help secure additional water rights for Butte Creek. Eventually that water will be given back to the ecosystem, mainly for conservation of the endangered spring Chinook. You can help by going to ButteCreek.Org and making a donation.