America’s Billionaires: Borrowing Their Way to Ever More Fabulous Fortunes 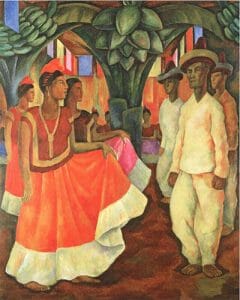 No widely acclaimed artist in the 20th century baited and battled the rich with as much gusto as Diego Rivera. The Mexican painter’s Great Depression-era confrontation with Nelson Rockefeller, then the twenty-something grandson of the world’s single richest individual, captured front-page real estate all across the United States — and far beyond.

The Rockefeller family had hired Rivera to paint the artistic centerpiece of the newly constructed Rockefeller Center in New York. Rivera’s resulting mural contrasted the “debauched rich” with workers on the rise. Right-wingers went apoplectic. Young Nelson, getting hammered, asked Rivera to remove an image of Lenin from the mural. Rivera refused, offering instead to add a portrait of Lincoln.

The Rockefellers would eventually have Rivera’s mural plastered over, but not before E. B. White, the beloved author of Charlotte’s Web, penned “a classic of light verse” on the face-off for the New Yorker. His poem’s most famous couplet had grandson Nelson excusing his censorship:

And tho your art I dislike to hamper,
I owe a little to God and Gramper.

How can art like Rivera’s be subsidizing the super rich? These awesomely affluent are using their art collections — and any other assets they may hold, everything from classic car collections to shares of stock in the companies they run — as collateral for loans from America’s biggest banks. Why would billionaires need loans? The simple answer: They don’t need loans. They need tax breaks, and they can get them by borrowing — at exceedingly low interest rates — off their mountains of assets.

Take Elon Musk. In 2019, he took out $61 million in mortgages on five properties he owned in California. About that time he also had some 40 percent of his personal shares in Tesla pledged as collateral for still other loans. Musk’s millions in borrowed cash have been bankrolling his lavish lifestyle and new investments. These millions have also been providing a sweet end-run around Uncle Sam at tax time.

If Musk had sold some of his Tesla shares or surplus California properties to raise fresh cash, he would have owed capital gains tax on his sale earnings. But by borrowing for the cash, he let his Tesla and California property assets continue to increase in value and, at the same time, sidesteps any taxes.

Billionaires Clarissa and Edgar Bronfman have been playing the same borrowing game, only with their art collection. Diego Rivera’s 1928 Dance in Tehuantepec, the Architectural Digest notes, sits at one end of their Park Avenue triplex living room. The Bronfmans have been using their Rivera — and other artworks — as collateral for their own borrowed cash.

Billionaires like the Bronfmans can get loans these days at rates under 1 percent, and they’ve been rushing to take advantage. The “wealth management” departments at America’s top banks — the offices that service America’s most affluent — have now made loans that total over $600 billion in value, a sum that’s running 17.5 percent higher than the comparable total from the middle of last year. Loaning to the rich has essentially become a major part of the business that major banks do. These loans, the Financial Times observes, currently add up to “22.5 percent of the banks’ total loan books, up from 16.3 per cent in mid-2017.”

“JPMorgan and Citi are now lending more to a small number of ultra-high net worth clients than to their millions of credit card customers,” adds the Financial Times take. “A decade ago, JPMorgan was lending five times as much to credit card customers as it did to private clients.”

What makes banks like JPMorgan, Citi, and Morgan Stanley so eager to extend these billions in loans — to the rich — at such low interest rates? One reason: The loans come as close to risk-free as risk-free could be. A more important reason: Big banks cherish close relationships with extremely rich people. These rich often run extremely large corporate empires and can steer their corporate banking business to the banks that cater to their personal needs. Elon Musk, for instance, has used Morgan Stanley, his personal lender, for Tesla stock and convertible-debt offerings.

“Providing mega-mortgages,” a Bloomberg analysis sums up, “helps bank profit margins in the short run and is highly strategic long-term.”

Diego Rivera, Night of the Rich.

The only losers in all this loaning and borrowing: average Americans who pay their taxes while wealthy people avoid theirs. Working Americans pay the price for that avoidance. They depend on public services that tax shortfalls cripple. Rich people, meanwhile, don’t use public services. They live in private worlds made ever more comfortable by the “asset-backed loans” that have become, points out Institute for Policy Studies analyst Chuck Collins, “one of the principal tools the ultra-wealthy are using to game their tax obligations down to zero.”

The best antidote to this gaming of the federal income tax? That may be the wealth tax legislation that Senator Elizabeth Warren from Massachusetts introduced this past spring with Representatives Pramila Jayapal of Washington State and Brendan Boyle of Pennsylvania. These lawmakers are proposing an annual wealth tax set at a mere 2 cents per dollar on wealth between $50 million and $1 billion and 3 cents per dollar on riches over $1 billion. A wealth tax along these lines would have raised $114 billion in taxes from billionaires alone in 2020. Just one of these billionaires, Jeff Bezos, would have faced a personal $5.7-billion wealth tax bill.

Bezos and the rest of America’s billionaires could easily afford Warren’s proposed wealth tax freight. Their current combined fortune: $4.7 trillion, up $1.8 trillion since the pandemic began.