The US Economy: Progress, But Not Home Yet

The June jobs report was damn good news. The 850,000 new jobs created was at the high end of what I imagined to be possible. There is a limit to how rapidly businesses can hire. It is easiest when it’s just a matter of recalling workers who are laid off. But the vast pool of people on temporary layoffs has dwindled. As I pointed out, the share of the unemployment due to temporary layoffs had fallen to a level that was normal for a recession. It was 19.0 percent in June, down from a peak of 77.9 percent last April.

We also are looking at a situation in which an extraordinarily large share of the unemployed are long-term unemployed (more than twenty-six weeks). Historically, it has been harder for this group of workers to find new jobs.

For these reasons, it didn’t seem likely that we could have the sort of million plus monthly job growth that we saw last summer. In that context, adding 850,000 jobs in a month is probably about as good as we could hope for.

The strong job growth was associated with strong wage growth, especially for workers in lower-paying sectors. This is consistent with the hard to get good help story that we are constantly hearing about in the business press. Of course, it is not really impossible in most cases to get more workers, restaurants added 195,000 jobs in June, employers just have to pay more money.

The story in the June data is that workers are getting pay increases, and this is especially the case for workers at the bottom of the wage ladder. The data from the Bureau of Labor Statistics’ establishment survey are not ideal for measuring wage growth for different groups (the Current Population Survey is much better, but the monthly and even quarterly data are very noisy) but we can get a general picture.

The data for the last year are somewhat skewed by composition effects (the lowest paid workers lost their jobs, thereby raising average pay), but if we take the averages for the last two years, with most workers now rehired, the impact of composition changes is more limited. What we see is that average wage growth has been strong over this period, but it has been strongest for the lowest paid workers. 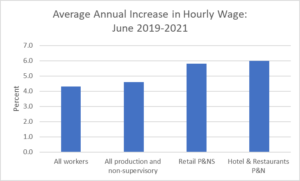 This is a big deal for these workers. In the case of hotel and restaurant workers, the increases over the last two years come to $1.77 an hour. For someone working a full-time full-year job (many of these workers only work 20-30 hours a week), this would mean a pay increase of more than $3,500 a year.

Of course, how much this translates into higher living standards will depend on inflation. Inflation over the last two years has averaged 2.6 percent annually. This means that the lowest paid workers still got large pay increases, even after adjusting for the rise in prices. After adjusting for inflation, the average hourly wage for retail workers still rose by more 6.4 percent over the last two years. For restaurant workers the increase a bit less than 7.0 percent.

We will likely see a somewhat slower pace of wage growth once the surge of reopening hiring is over. As pandemic restrictions have ended over the last few months, many businesses rushed to staff up to accommodate more customers. This led to a record number of job openings reported for April. The story is likely to be similar in the May data released this week, but we will probably be through this stretch by the end of the summer.

Also, the normal rise in seasonal demand has added to difficulty for employers in finding workers. Many hotels and restaurants always add to their staff in summer months. This is a seasonal effect that is accounted for in our seasonal adjustments. But when this additional hiring coincides with the ending of the pandemic, it makes hiring considerably more difficult. However, when we get to September. The situation is reversed, with seasonal workers being laid off.

On the negative side, this means that the bargaining power that many lower paid workers enjoy at the moment is likely to be eroded quickly. On the plus side, there is less reason to fear that we are seeing the beginning of an inflationary spiral, with higher wages forcing price increases, which then lead to higher wage demands.

It is also important to remember that lower paid workers account for a relatively small portion of the total wage bill. If all workers were seeing 6.0 percent annual pay increases, it almost certainly would lead to higher inflation. But these sorts of pay hikes in the restaurant and retail sector have little impact on overall inflation.

The 4.3 percent average rate of wage growth overall is roughly a percentage point higher than the rates we were seeing before the pandemic, but this can be largely absorbed in a lower profit share and more rapid pace of productivity growth. A decline in profit shares would just be reversing the rise we saw following the Great Recession. It may be bad news for the stock market, but good news for just about everyone who didn’t own large amounts of stock.

Productivity growth is always erratic, especially around recessions. No one expects the economy to sustain anything like a 4.0 percent rate of productivity growth, but businesses were forced to find new ways of operating in the pandemic. Many of these changes led to more efficient ways of doing business. As innovations diffuse more widely, it is very plausible that we will see substantially more rapid productivity growth for at least the next few years. This will allow for more rapid wage growth without inflation.

Oil prices are an area that provide some basis for concern in the overall inflation picture. While oil is far less important to the economy than it was in the 1970s, it is still important, and rising oil prices show up as higher inflation in not obvious places like rent (which often includes utilities) and airfares, which are highly responsive to the price of jet fuel. Of course, higher gas prices are highly visible and likely to be an issue raised in elections.

Oil prices had plummeted during the pandemic, with future prices actually turning negative, meaning that it was necessary to pay people to commit to taking delivery of oil. Crude prices have been rising consistently since last fall, with the current price hovering near $75 a barrel, roughly the same as the peak levels in the years just before the pandemic.

It’s not clear if this sort of price can be sustained long. There are many places in the world where oil can be profitably produced at $75 aa barrel, but not at $50 or even $60 a barrel. Production was shut down in these areas in the pandemic, but we can expect many to be coming back on line in the next few months.

There is also another factor that could put serious downward pressure on oil prices. If oil producers take seriously the commitments to electric cars and clean energy by the United States and other major consuming nations, then they will realize that they have an asset whose value is likely to plummet in coming years. In that context, it makes sense to try to produce as much as possible while the price is still reasonably high.

Clearly this is not happening now, and most projections show oil demand continuing to rise modestly throughout the decade. But it is possible to imagine that aggressive moves towards clean energy could change this picture and create a climate of fear among oil producers.

Progress, But Not Home Yet

Given the depths to which the economy sank last spring, and the huge surge in coronavirus cases and deaths this winter, you have to be pretty happy with the way things stand now with the economy and the pandemic. In the case of the latter, the daily rate of both cases and deaths is down by far more than 90 percent from the winter peaks. In the states with the highest vaccination rates, the number of cases reported daily is down by more than 99 percent.

We may not see more months of 850,000 job growth, but it certainly is reasonable to believe that we can stay in a range between 500,000 and 700,000 at least through the rest of the year. Since we are still down 6.5 million jobs from before the pandemic started, this means we won’t make up the jobs lost until the winter. It will be even longer until we can get back to the pre-pandemic trend and get back jobs that should have been created over the last year and a half.[1]

Still, the picture looks hugely better than it did six months ago. If Congress can use the summer to pass legislation dealing with longer term problems, like addressing global warming, improving child care and home health care, fixing Medicare, and making health care more affordable generally, the picture will be even better.

[1] We may end up a somewhat lower trend growth path if, for example, some older workers choose to retire earlier than they had planned before the pandemic. More early retirements is not a bad thing, if it is voluntary, but it does reduce the size of the workforce.

This article was first published on Dean Baker’s Beat the Press blog.