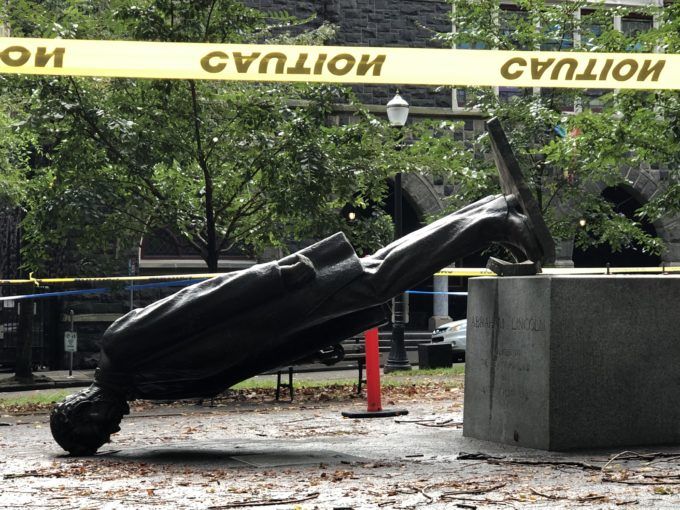 The G7 meeting focused attention on many challenges facing the world, but it did not address the most dangerous threat of them all, which is the transformation of the Republican Party in the US into a fascist movement.

When Donald Trump was in the White House there was much debate about whether or not he could be called a fascist in the full sense of the word, and not merely as a political insult. His presidency showed many of the characteristics of a fascist dictatorship, except the crucial one of automatic re-election.

But Trump or Trump-like leaders may not have to face this democratic impediment in the future. It was only this year that the final building blocks have been put in place by Republicans as they replicate the structure of fascist movements in Europe in the 1920s and 1930s.

Two strategies, though never entirely absent from Republican behaviour in the past, have become far more central to their approach. One is a greater willingness to use or tolerate violence against their opponents, something that became notorious during the invasion of the Capitol by pro-Trump rioters on 6 January.

The other change among Republicans is much less commented on, but is more sinister and significant. This is the systematic Republican takeover of the electoral machinery that oversees elections and makes sure that they are fair. Minor officials in charge of them have suddenly become vital to the future of American democracy. Remember that it was only the refusal of these functionaries to cave in to Trump’s threats and blandishments that stopped him from stealing the presidential election last November.

Many of them will be unable to perform the same duty in future elections. The Republican Party across the country is replacing or intimidating them so they are giving up their jobs or are being forced from their posts. In Pennsylvania, a state which played a crucial role in Trump’s defeat, a third of county election officials have changed as have numerous others in swing states like Michigan and Wisconsin. Their places are frequently being taken by conspiracy theory zealots who will have the power to nullify election results that are not to their liking. A survey by the Brennan Center for Justice shows that one in three local election officials say that they are being subjected to harassment and other pressures.

Speeding up this exodus are Republican state legislatures that have passed laws mandating heavy fines – $10,000 in Iowa, $25,000 in Florida – for election supervisors who make minor technical mistakes. Republican officials who refused to say that Trump won the election are being removed by their party. The Republicans should be able to do in 2022 and 2024 what they failed to  do in 2020, which is to nullify election results at will so the true outcome of a poll can be ignored. Put simply, the will of the people will no longer count for anything.

Authoritarian regimes across the world have found that it is much easier and more certain to announce the election result they would like than to go to all the trouble of suppressing votes and gerrymandering constituencies. Once control of the electoral machinery is obtained then democracy poses no threat to those in power. Fascist leaders may use democratic processes to obtain office, but once there, their instinct is to pull up the ladder and let nobody else climb up it.

Nullification of elections is only the latest step in the Republican Party’s strange voyage towards becoming a genuine fascist party. Other steps have a much longer history, notably the moment half a century ago when President Nixon adopted his “Southern Strategy” whereby the Republicans capitalised on the Civil Rights acts to make a political takeover of the American South. The old slave states became the strongholds of the Republican Party which had once freed the slaves and defeated the Confederacy.

It is worth listing the chief characteristics of fascist movements in order to assess how far they are now shared by the Republicans. Exploitation of ethnic, religious and cultural hatreds is probably the most universal feature of fascism. Others include a demagogic leader with a cult of personality who makes messianic but vague promises to deliver a golden future; appeals to law-and-order but a practical contempt for legality; the use, manipulation and ultimate marginalisation of democratic procedures; a willingness to use physical force; demonising the educated elite – and the media in particular; shady relations with plutocrats seeking profit from regime change.

One by one these boxes have been ticked by the Republicans until the list is complete. The Tea Party movement was an important staging post on the road to Trumpism. Trump himself possesses all the classic features of a fascist leader, though he was somewhat hemmed in by the institutional and political divisions of power. Yet these impediments will be less in future as local legislatures, courts, electoral machinery and Congress itself are colonised by Trumpian Republicans. This erosion of democracy has a precedent, given that Al Gore in 2000 and Hillary Clinton in 2016 were denied the presidency though each won a majority of the popular vote, but it is becoming all pervasive

American fascism differs from its European, Middle Eastern and Latin American variants because of the history of America, with its legacy of slavery, and the Civil War still remaining as a great divider. Slavery was abolished, the Confederacy lost the war, but in many respects the civil war never ended.

The civil rights legislation of the 1960s provoked a white counteroffensive that still goes on. Opposition to racial equality has never ceased. The key provision of the Voting Rights Act of 1965, which declared that changes in state election laws must have federal approval, was invalidated by Republican appointed judges on the Supreme Court in 2013. “Our country has changed,” said chief Justice John G Roberts in a majority opinion, which declared that racial minorities no longer faced barriers to voting in states with a history of discrimination. The absurdity of this was immediately demonstrated as Texas introduced a previously blocked voter ID law.

Voter suppression has ballooned ever since, but never more than this year. Some 14 Republican controlled states have passed 24 laws criminalising, politicising and interfering in elections to their own advantage.

What explains the descent of the Republican Party into fascism? Racial division explains much. The division of American culture along the same geographical lines as the civil war explains more. Add to this the frightening dislocation imposed on white working- and middle-class Americans by technological change and globalisation. Powerful forces are let loose similar to those that once propelled the rise of European fascism and is now doing the same in America.