Wilderness and Grazing: Time to Send the Cows Home Cows in designated wilderness areas? Does that seem like an oxymoron? Wilderness Areas are supposed to be places where natural processes and native species are given priority. With the election of the Biden administration, it may be time to reconsider grazing in designated wilderness, especially in light of the 30 x 30 goal of protecting 30 percent of the U.S. by 2030.

The problem of cows (and sheep) in the wilderness goes back to the original debate around enacting the Wilderness Act. House Interior and Insular Affairs Committee Chairman Wayne Aspinall (D Colorado) was a staunch proponent of the livestock industry and would not allow the legislation to pass out of committee for a vote unless some accommodation was made for continued grazing of livestock.

Even more egregious is that, unlike other public lands, termination of livestock grazing in wilderness areas is more challenging than non-wilderness lands. Livestock grazing can only be eliminated if it has significant impacts on other resource values, and wildlands values are not one of those resources.

Many proponents of the Wilderness Act felt without this compromise, the legislation would never see the light of day. But given changing understanding of the full ecological impacts of livestock production, combined with changing social values about nature, it is appropriate for Congress and the Biden administration to reconsider livestock production within designated wilderness areas.

Unlike other compromises incorporated in the original 1964 wilderness that banned all mineral exploration after a twenty-year grace period, there was no ultimate termination date for livestock grazing.

Therefore, some 13 million acres of designated wilderness on Forest Service, Bureau of Land Management, Fish and Wildlife Service Refuges, and even National Park Service lands have some domestic livestock production.

To put this into perspective, this is more than double the size of 6-million-acre Vermont.  Yet this wilderness acreage only provides one-tenth of one percent of all livestock forage consumed by domestic animals in the United States.

WHY IS THIS A PROBLEM?

There are both ecological and philosophical reasons why domestic livestock production is inappropriate in wilderness areas.

Putting a significant amount of forage (native vegetation) into an exotic animal removed from the ecosystem has multiple ecological consequences for nutrient flow and food (carrion) for native wildlife.

Domestic animals by consuming vegetation that might otherwise support native species from grasshoppers to elk reduce the overall carrying capacity for native wildlife. 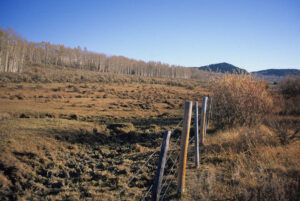 Livestock is also protected from predators, and even in designated wilderness, native wildlife like wolves and bears are killed to protect domestic animals. 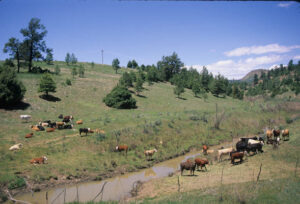 Cattle tend to congregate near water sources, trampling the vegetation, breaking down the banks, and polluting the water. Photo George Wuerthner.

Since much of the western public lands grazed by livestock are arid, domestic animals tend to congregate near water sources such as streams and spring, destroying vegetation, polluting water sources, and trampling banks and soil. Since these thin, green riparian areas are critical to 70-80 percent of western livestock, the degradation of these areas can significantly impact native species. 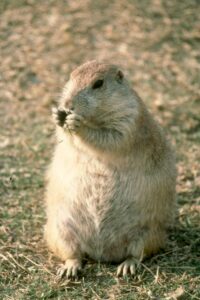 Prairie dogs are regularly poisoned on public lands to assuage ranchers who believe the rodents complete with their cattle for food, even in areas where the endangered black-footed ferret is being reintroduced. Photo George Wuerthner.

Numerous studies have documented that livestock production is a major cause of species endangerment and listing under the Endangered Species Act. For example, research has demonstrated that one of the main obstacles to the recovery of the black-footed ferret is the poisoning of prairie dogs which are the main food source. While dams constructed for water storage reservoirs have impacted water quality to the detriment of native fish like the humpbacked chub in the Colorado River where it flows through the Grand Canyon. 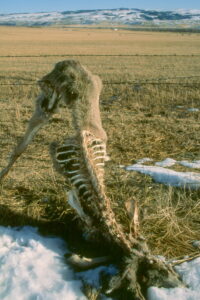 Infrastructure built to accommodate livestock production like fences and water developments also harm native species. For example, sage grouse can suffer mortality up to 29% due to collision with fences and can be a barrier to movement of other species like deer or pronghorn. While removing water from natural springs and seeps for distribution by pipelines or filling water troughs has been shown to harm native amphibians, mollusks (snails), and birds.

Even where livestock is managed to ensure that grazed grasses and other plants are not harmed, it can still impact native wildlife. For instance, it is common to have regulations requiring that 4-6 inches of “stubble” height be left after the grazing season to ensure that plants have sufficient reserves. Yet, many species from voles to grouse to pronghorn antelope fawns require much taller grass for cover to hide from predators. 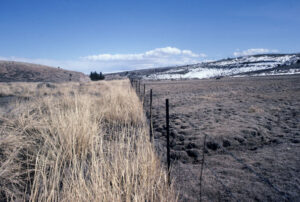 Loss of hiding cover as a consequence of heavy grazing making native species vulnerable to predatores can impact many species from voles to deer fawn. Photo George Wuerthner.

While the number of domestic cattle using wilderness areas and even public lands, in general, is small, domestic livestock are still are a significant contributor to Greenhouse Gases. Given the need to reduce all GHG emissions sources, it makes sense to focus livestock reductions on designated wilderness if the reduction on any public lands is to be made.

The philosophical problem of livestock production is that it is a domestication of the land that is supposed to be “self-willed” and dominated by natural forces.

Also, there is the public perception issue as well. In many wilderness areas, campers are asked to bury their human waste and camp far from water sources. Such decrees seem foolish when cattle or sheep can poop anyplace and trample the streams and lakes’ shoreline.

It is important to note, despite the frequent reference to “grazing rights,” all livestock production on public lands is a privilege. There is no “right” to public forage. The federal government has the legal authority to terminate livestock production at any time. Termination of livestock grazing privileges has always been difficult due to the livestock industry’s political influence over federal agencies.

Despite the obstacles, several measures could be enacted to reduce livestock production impacts on our wildlands.

The most straightforward and most immediate response is to cancel vacant allotments. Currently, there are approximately three million acres that are no longer in use by ranchers, yet in many instances, they remain available for other ranchers to utilize. Permanent closure of these vacant allotments should be relatively easy to accomplish.

Second, more direct instruction and discretion to managing agencies to terminate livestock grazing where significant ecological impacts are documented. Where there is degradation to water quality, harm to native plant communities, conflicts with native wildlife (like predators), and damage to ecosystem function, termination of grazing privileges should be an option.

Third, in many wilderness areas, it is entirely permissible to use pickup trucks, ATVs, and other motorized access to manage livestock or fix infrastructure. Put the cowboy back into ranching by placing stronger constraints on the use of motorized access and equipment in designated wilderness, so it conforms to the limitations imposed on all other wilderness activities.

Finally, enact legislation that would allow voluntary permanent grazing permit retirement. This proposal would pay ranchers who waive their grazing “privileges” back to the government, which would then be required to retire the permit permanently from any future grazing.  Here is the test for recently introduced legislation.

Ultimately, it would be advantageous to pass legislation that would terminate livestock grazing in all wilderness areas as was done for mineral exploration. An termination date of ten years would be reasonable and give ranchers enough time to make other arrangements for their livestock production.