No Beach Dompas: an Illegal Dip in the Indian Ocean During South Africa’s Covid-19 Restrictions 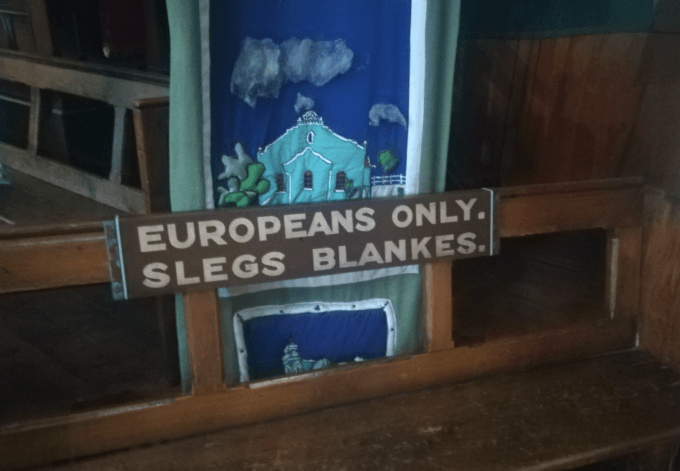 Tucked away down a residential road near the beach house we were staying at for the weekend is a path that cuts through thick sub-tropical vegetation to the Indian Ocean. As we arrive, we see, right there at the turnoff to the path, an idling police car. It looks like our chances of going for an illicit dip have been scuppered if the beaches and access points are being monitored to such an extent.

On 30 December 2020, the South African government put the country back on Level 3 restrictions to try and curb the surge in Covid-19 cases over the Christmas holidays. This included a ban on alcohol sales, and the use of any body of water open to the public – lakes, dams, rivers, and the oceans, including beaches.

We had just spent two weeks in the interior, up in the Kalahari bordering Botswana and Namibia. It was hot, dusty and damn far from the beach – almost 500 kilometres from the Northern Cape’s Atlantic coastline, which had not banned beach access, partly due to being so sparsely populated, as well the water being very cold – and 1,500 km from the coastline of KwaZulu-Natal (KZN), where we live.

Covid-19 cases were spiking in KZN, which is typically inundated with domestic tourists from the rest of the province and Gauteng – the sprawling urban mass of Johannesburg and Pretoria – thronging to the beaches, which locals call the ‘oil slick’.

Upon our return to KZN from our venture into the interior, we decided to round off our trip with a few days on the South Coast at a friend’s beach house, which had an unexpected vacancy due to the Level 3 restrictions.

The beach town, south of Durban, was established in the same year as apartheid (‘aparthood’) was introduced, in 1948. Like many of the beach towns, but in line with KZN’s British baaskap (‘white superiority’), with the province having a smaller Afrikaans population, the names of streets and towns reflected that of Britain’s empire and less sun-washed towns – Churchill Street, Falkland Place, Mountbatten Street, Trafalgar, Margate, Southbroom, Ramsgate, Portobello.

The town is well kept, with scores of gardeners, male and female, to be seen hacking back and using brush cutters to tame the vegetation that grows so fast, especially in the summer rainy season.

Settled into the house we go out on the deck, which has a commanding view over the ocean. The last time we were there, in June, we could see whales and schools of dolphins in the distance, an awesome sight warranting the continuous carrying of binoculars to watch the cetaceans’ frolics.

We decide to risk the beach. As we pack our beach bag we throw in the binoculars, but not for scanning the ocean for whales doing aqua-batics – it is the wrong season – but to scan the beach for members of SAPS, the South African Police Service.

We walk down to the junction. No sign of the police car. We walk further down the tarmac road to the path that leads down to the shore. We head down it, walking under palms, bird of paradise plants and creepers. Butterflies flutter around, and there is the constant orchestra of cicadas.

As the path ends, there is a circle of light ahead, a gap in the vegetation. My toddler son runs ahead to the opening and squeals with delight. “The sea! The beach!”

I tentatively step out onto the beach, looking left and right for any sign of the police. No one in sight, for several hundred metres either way. No footprints in the sand. We venture forward, with each step breaking the law.

We put down the beach bag, kick off our ‘slops’ (South African slang for flip-flops) and enjoy the smell of the sea and the sand between our toes. We are soon joined by a young couple that popped out of the same pathway we took. They are also visibly excited to be by the ocean and, no doubt, from the rush, the accelerated heart beat that comes with doing something you are not allowed to do.

We swim, diving into the waves yet mindful of the strong current, glancing down the coastline every now and again, scanning the distance.

Whenever the silhouette of a person appeared in the distance, my wife or I would pull out the binoculars – is it the law or a fellow law breaker over yonder? This time it is the latter. We wander further down the beach, feeling more emboldened, thinking: surely they, the police, wouldn’t bother walking kilometres down an unfrequented beach? My son propels his push bike with his feet through the sand, looking back occasionally to see the trail he has left in his tracks.

We reach a dead tree that has been washed ashore and partly buried under the sand, its branches sticking out. My son climbs on them. I look down the beach. In the distance, towards the town’s main beach, are horses. My heart beats a little faster. I grab the binoculars, steadying them on a branch. I see several riders, in white and dark shirts. Mounted police?

We decide to make a run for it, but we are too far from the entrance to the pathway. We look around and spot a cutting in the vegetation – another path. We grab the beach bag, the push bike and our son, and scamper across the sand. We scramble up the several steps to the path, and up and down we go as we stride along the path. The path has been recently brushed – is it a private path? We push on, then stop to quickly change out of our swimming gear to try and appear as if we are not beach going criminals. We follow the path for several minutes, then reach a metal gate. It is a private path, access to the road denied, as so much is in this country of fences and delineations of private property; no right to roam.

Such restrictions prevented us from walking in the Drakensberg mountains when the KZN nature reserves were closed due to Covid-19 preventative measures in early 2020 – rivers are fenced across, and mountain sides are scarred by fences.

We’ve encountered a similar issue in our flight from the beach. We have no choice but to turn back and face the music. Maybe the police are waiting for us on the beach, or maybe they have ridden further down the coast. We could not wait them out too easily with a toddler that needs to be entertained. We are also sticky with sweat from our exertions and the humidity. We walk back to the beach.

My wife gets to the beach first and starts laughing. It is not the police but a horse riding club. Are you sure? Yes. We go back on the beach, and start walking towards the public pathway. On the way we are overtaken by the riders – four Indian South Africans being escorted by two Zulu men. One of the men looks at me with a flicker of humour in his eyes – he saw us race across the beach, like fools, as it it turned out. The pony club presumably had some form of permission to be on the beach.

It was an unimaginable sight historically, of a white family running off the beach. During apartheid, the best beaches were, to quote Section 37 of the Durban beach by-laws, “reserved for the sole use of members of the white race group”. According to a New York Times article from 1981, “the penalty for being a non-white on a white beach is a fine of 50 Rand, $75, or 50 days in jail”.

If we had been caught by the police, we would have been fined 1,000 Rand, about $66. Forty years apart, yet the fine is roughly the same. But unlike the past, until 1989 when beaches were open to everyone, it is a beach ban for all races. Yet aside from the occasional black man that looked like he was walking back from work along the beach, and the pony club, the only beach goers that we saw were white, mainly families, feeling privileged enough to buck the ban by being able to afford a fine or thinking that the police would not bother to patrol a predominantly white, wealthy neighbourhood beach.

For indeed the access to the beach is primarily from private pathways, and only those ‘in the know’ would know about the small public pathway to the beach that we used. Today it is no longer about race, but about class that determines whether you can access a beach, or if you have the means and transport to go to swim in a river in the Drakensberg – only a third of the population has access to a private vehicle.

I later joke on a messaging app with an Indian South African friend, old enough to have been a young man when aparthied ended, and very bitter at the ANC’s running of the country since 1994 – “they were our heroes” – about the right to roam and Covid-19 restrictions. “You’re white, you don’t need a dompas”. The dompas, the “dumb pass” as it was called, was a passbook all non-whites were required to carry during apartheid to prove their identity and where they could live or work.

Over the weekend, we violated the beach ban law a few more times, every time scanning the horizon for the long arm of the law. Yet my continuous look out for the police cost me. Karma you might say. Having weak eye sight, I was wearing a pair of prescription sunglasses for my last illicit swim in the ocean. Just as I swam back into the shallows a wave knocked my glasses off my face, and disappeared below the waves.