If cattle graze to bare soil, it is true that fires are slowed under such conditions, but the ecological impacts are enormous. Photo George Wuerthner.

When I worked for the BLM doing botanical surveys, us “ologists” (hydrologist, ecologists, biologists, archaeologists, geologists, and botanists) used to refer to Range Conservationists as Range “Cons” because they conned the public into believing many myths about livestock grazing.

It’s essential to keep in mind that range cons have a financial conflict of interest. If there are no cows, there is no reason to have a range conservationist on the payroll. So, what you will see over and over is that range cons will do just about anything to maintain cows on the range. And they don’t mind spending your money (taxpayer) to make this happen. Most range cons (and range professors) see their allegiance to the livestock industry, not the public interest.

One of the “cons”  heard continuously from range cons and repeated by uninformed media is that grazing can help preclude large “mega” fires by “reducing” fuels. This is one of those many assertions that have a grain of truth but is nevertheless misleading.

EXPERIMENTAL VS LANDSCAPE SCALE OF RESULTS

Many of the studies purporting to demonstrate the influence of livestock grazing on fire spread were done on small experimental plots of land. The transfer of these findings to the larger landscape scale is questionable.

For instance, in an experimental study of cattle grazing impacts on fire, 90% of cheatgrass in plots was consumed during the “boot” stage. These grazed plots were then burned and found to slow or stop fire spread (Bailey, Derek W., et al. 2019). The problem with this and many other experiments is that given a choice, livestock will not consume cheatgrass except early in the spring while green. So, getting cattle to remove 80-90% of the grass except in experimental plots is unlikely.

Furthermore, the process of getting the cattle to remove such a high percentage of cheatgrass would decimate soil biocrusts, which slow or prevent cheatgrass establishment. Since cattle prefer to forage on native perennial grasses, if a site had any native species left, they would disproportionately be grazed, harming their competitive ability to survive cheatgrass invasion (Reisner, Michael D., et al., 2013).

In another widely cited study in Arizona, the researchers had several small plots (several acres in size). They compared the fuel remaining after fields were grazed with non-grazed plots. They concluded (with modeling) that light utilization (26%) in treated sites, the BehavePlus fire model predicted that herding reduced fire rate of spread by more than 60% in grass communities and by more than 50% in grass/shrub communities (R.A. Bruegger et al. 2016).

There are several misleading implications of this study. As in the previous study, the experiment was done on small plots where grazing was monitored and tightly controlled. This kind of monitoring and control does not exist on most public lands or even private land parcels.

But the real problem with this and many other studies that presume to show a livestock-grazing induced reduction in fire spread do not work under extreme fire weather.

Bruegger and colleagues admit as much in their next to the last paragraph: “Although it is a promising tool for altering fire behavior, targeted grazing will be most effective in grass communities under moderate weather conditions.”

The weather factors are significant because nearly all massive wildfires burn under “extreme fire weather conditions.” Under such conditions, targeted grazing, prescribed burning, thinning of forests, and fuel breaks, fail to contain or stop fires. In attempting to reduce fuels, such prescriptions often lead to more fire-prone species like cheatgrass. 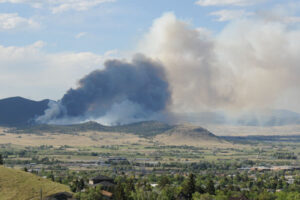 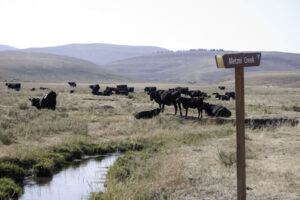 It is important to note that much of the grassland/shrub ecosystems of the western United States west of the Great Plains evolved in the absence of large herds of grazing herbivores like bison (Mack and Thompson 1982), thus are vulnerable to heavy grazing pressure.

Alternatively, and far more critical these days, livestock grazing is one factor in the spread of cheatgrass, an annual exotic that is extremely flammable (Belsky, A.J. and J. L. Gelbard, 2000). Merriam et al. (2006) found that nonnative plant abundance was considerably higher on fuel breaks than in adjacent wildland areas, especially when the heavy ground disturbance was involved, providing a potential vector for weed invasion 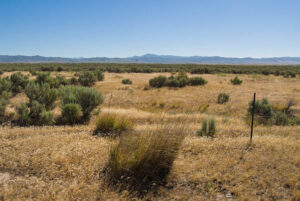 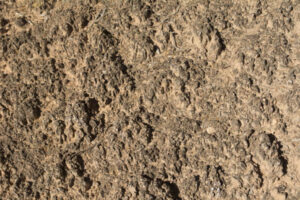 Another study that looked at fuel breaks created by targeted grazing and other measures like bulldozing native vegetation cautioned that the “cure might be worse than the disease” since the destruction of soil biological crusts and loss of native grasses that occur with targeted grazing, bulldozing. Other fuel reductions create a disturbance habitat that favors the spread of cheatgrass. 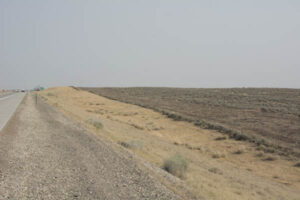 The authors cautioned: “these projects could also add thousands of kilometers of new fuel breaks to the region over the next decade or two, directly altering hundreds of thousands of hectares through habitat conversion, and indirectly affecting sagebrush plant and animal communities through the creation of new edge effects and habitat fragmentation” (Shinneman et al. 2018).

Using livestock grazing to preclude large wildfires is an ineffective means of coping with blazes. Livestock grazing has little influence on large-scale blazes, primarily driven by extreme climate/weather events. The probability that a large fire will encounter a recently grazed area is small, but livestock grazing’s ecological impacts are enormous and assured. The best way to reduce wildlife’s threat is to fire-safe the home and ultimately reduce global climate warming, driving many of the more enormous blazes experienced in the West.

Belsky, A.J., A. Matzke, and S. Uselman. “Survey of Livestock Influences on Stream and Riparian Ecosystems in the Western United States.” 1999. Journal of Soil and Water Conservation, Vol. 54. Online. Aug 25, 2003.