The US Has Been Exporting COVID-19 to Haiti; Now, It is Returning a Death Squad Leader

As the COVID-19 pandemic has shut down borders and airports across the world, planes chartered by US Immigration and Customs Enforcement (ICE) continue to fly. Every two or three weeks, a deportation flight operated by Swift Air, LLC has landed at the Port-au-Prince airport. After one such flight in early April, at least three of those deported tested positive for COVID-19. The pandemic is now sweeping through ICE detention facilities, putting the lives of tens of thousands at risk and highlighting the public health ramifications of continued deportations.

Next week, another ICE Air deportation flight is scheduled to arrive in Haiti. But the controversy will extend far beyond the health and well-being of those on board. According to a flight manifest obtained by HRRW, ICE is planning to deport Emmanuel “Toto” Constant, a former death squad leader who has been in a New York state prison for the past 12 years on grand larceny and mortgage fraud charges. Constant is listed in the manifest as a “High Profile Removal.”

Continued deportations have presented an additional strain on an already overburdened public health system, as the Haitian government has been forced to use scarce resources to quarantine and care for the dozens who arrive every few weeks. In late April, a government-backed scientific commission supporting the country’s COVID-19 response asked president Jovenel Moïse tohalt further deportations during the pandemic. Representatives of the Haitian government did not respond to a request for comment.

ICE has announced it will increase testing of deportees after pushback from regional governments but it is unclear how systematic the testing will be. ICE has stated that they would only receive about 2,000 tests per month — far below the estimated number of deportations. Nevertheless, the recent ICE changes have assuaged concerns from some countries in the region, which have been under increasing diplomatic pressure from the Trump administration to continue allowing ICE Air deportation flights. According todata compiled by CEPR, ICE has made at least 246 deportation flights since the beginning of February. After a brief respite, this week the pace of deportations has increased dramatically.

The Haitian government has pushed back on the deportations. Claude Joseph, the foreign minister, told the Miami Herald in April that he had been in communication with his counterparts in the US advocating for a moratorium on deportation flights. He said that the US had agreed to temporarily suspend the deportation of those with “criminal” backgrounds to avoid further crowding Haiti’s already overcrowded prison system. But, the US has thus far rejected an outright stop to the flights. A former Haitian government official said that there had been continued discussions around a moratorium of all flights. It appears that effort has failed.

On Monday, May 11, the next ICE Air deportation flight is scheduled to arrive in Port-au-Prince, according to the flight manifest. ICE identifies 51 of the flight’s 101 passengers as having criminal backgrounds. One of those is Constant, the 63-year old former death squad leader. ICE did not respond to a request for comment; the agency has a general policy of not commenting on future deportation flights. The flight manifest is a “tentative” list of passengers; it could still be changed before the flight.

Constant was facing up to 37 years in jail, but New York State prison records show that Constant was released to ICE custody on April 7 — 12 years after his conviction — in order to face deportation. Constant’s next parole hearing had been scheduled for August, 2020. ICE records show he is currently being held at the ICE federal detention facility in Buffalo, NY — where at least 45 of those detained have confirmed COVID-19 cases. 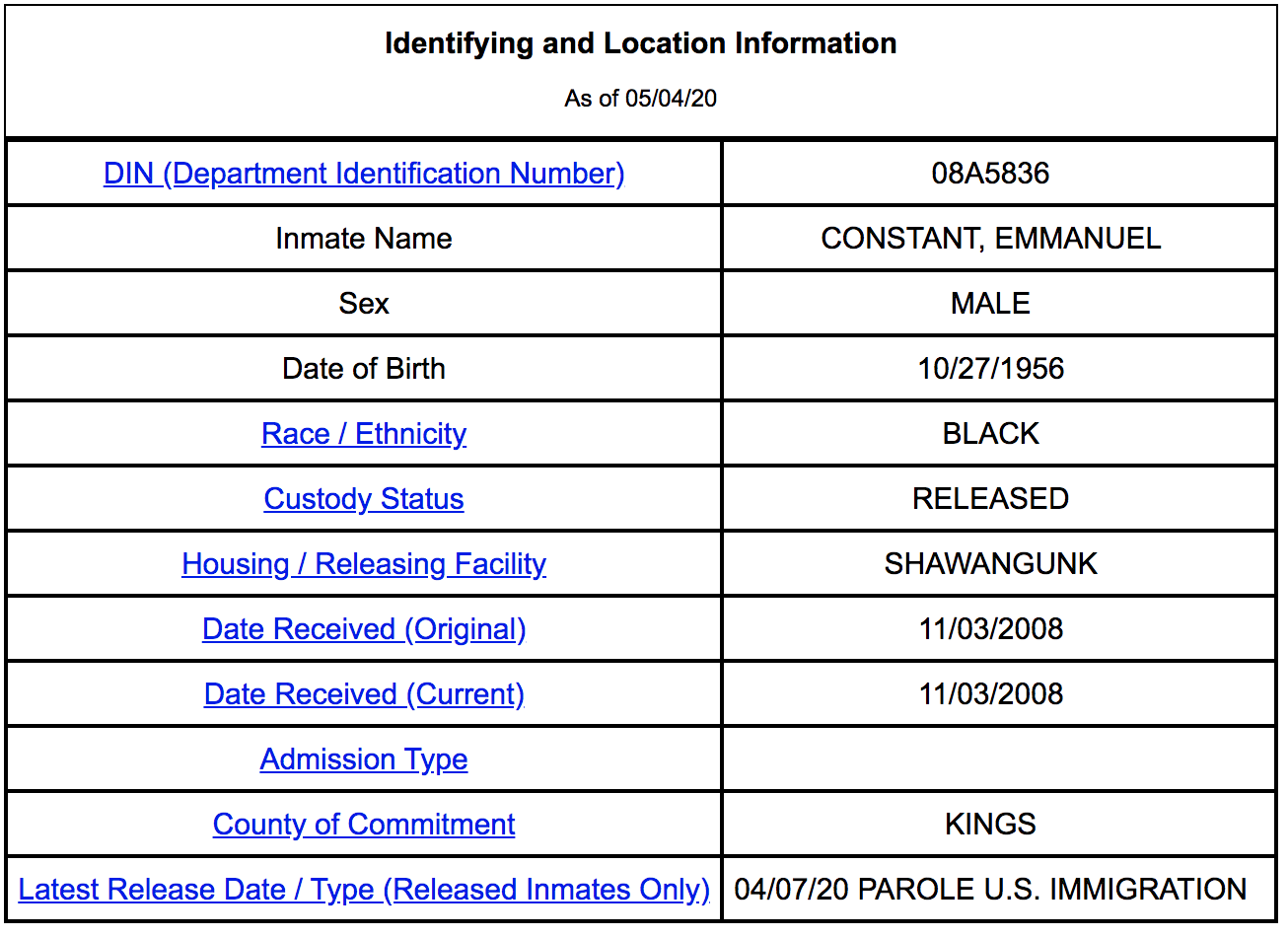 The Long Struggle for Accountability, Reignited

Constant was the former head of the Front for the Advancement and Progress of Haiti (FRAPH), a paramilitary organization that was responsible for the extrajudicial killing of an estimated 3,000 to 4,000 Haitians in the aftermath of the 1991 military coup — as well as thousands of incidents of rape, torture, and arbitrary detention. Constant, it was later revealed, was on the CIA payrollduring this period.

Upon the return of Jean-Bertrand Aristide in late 1994, Constant left Haiti and settled in the New York City area. In 2000, aHaitian court convicted Constant and 14 others in absentia for their involvement in a 1994 massacre in the small town of Raboteau. A civil action resulted in a $140 million award to victims’ families. In 2005, following the second ouster of Aristide, the high court in Haiti overturned the sentences for those who had been tried in person. The judgement against Constant remains valid, however, according to human rights organizations.

US courts have also recognized Constant’s responsibility for crimes against humanity, however. On behalf of three Haitian women who had been terrorized by Constant, the Center for Justice and Accountability (CJA) and the Center for Constitutional Rights (CCR) brought a civil case against Constant in 2004 and eventually won a $19 million civil judgment. Constant appealed the ruling, but the judgment was upheld by a federal court in 2009.

Separately, in 2008, Constant was convicted on charges of grand larceny and mortgage fraud in New York State Court and sentenced to 12 to 37 years. He remained in state prison until last month, when he was quietly released to ICE custody. In 2016, when Constant was up for parole, lawyers with CCR and CJA wrote to the New York State Parole Board cautioning against such a release: “If Constant were released from incarceration in New York, he would pose a serious flight risk, and might return to Haiti to exploit the tense situation to his political advantage.”

Now, the Trump administration is putting Constant on an ICE Air deportation flight direct to Haiti. But it remains unclear what will await the former CIA-backed death squad leader upon his arrival.

“If Constant is, indeed, deported to Haiti next week, the obligations of the Haitian criminal justice system are clear,” said Mario Joseph. The state must “arrest Constant as soon as he arrives and ensure that he is held accountable to the people of Haiti.” Joseph, a prominent Haitian human rights lawyer with the Bureau des Avocats Internationaux (BAI), was the lawyer who secured the guilty verdict in the Raboteau Massacre case on behalf of victims’ families. Twenty years later, however, the struggle for justice and accountability remains as distant as ever.

Constant, Joseph said, could either accept the existing judgment against him or demand a new trial as he had been tried in absentia. Joseph noted, however, that Haiti’s justice system has allowed others convicted in the Raboteau Massacre to go free, including Jean Robert Gabriel, who the Haitian government appointed to the high command of the reconstituted Haitian armed forces in 2018. Joseph added that Constant had fled Haiti in 1994 precisely to avoid accountability for his heinous crimes and that the US had failed to execute a judicial order requiring his return to Haiti at the time of the Raboteau trial.

“As with the Raboteau trials, which no one thought could be successfully prosecuted at the time, BAI will continue to advocate for justice for Constant’s victims,” Joseph said. “The law of Haiti is clear on what must happen next. It is my hope that the Haitian government lives up to its responsibilities.”

Constant is the most notorious among the 101 Haitians that the US intends to deport next week, and the case most fraught with political implications. But there will be 100 others, including 50 who may be facing further jail time back in their native Haiti. The Haitian government has thus far been using hotels in the capital to quarantine those who arrive via Swift Air flights every few weeks. It has provided meals and pledged medical support to deportees, but it is unclear what it will do with those facing criminal charges.

In 2019, Haiti’s prison occupancy rate was 358 percent — the jails are notoriously and chronically overcrowded, holding three-and-a-half times as many as they should be. The pandemic has shone fresh light at the horrid conditions of prisons — including in the US, where COVID-19 is spreading far faster among the prison population than among the general public. Governments across the globe, including in Haiti, are under pressure to remove people from prisons as a matter of public health. From March 19, when Haiti declared a national emergency, to April 15, at least 459 prisoners were released in Haiti, according to the National Human Rights Defense Network.

“Given the inhumane conditions and overcrowding in Haiti’s prisons, it is important the government release those detained — especially the large number of individuals who have never faced a judge and have been held indefinitely while facing only minor charges,” said Rosy Auguste of the National Network for Human Rights Organizations (RNDDH). Even with Haiti’s prisons overflowing, the country is facing a crisis of impunity — with those politically connected seemingly protected from justice. “Further deportations will only place additional strain on Haiti’s institutions,” Auguste added.

ICE is facing increasing pressure in the US over its continued deportations as well. Last week, 15 Senators wrote to Secretary of State Mike Pompeo and Acting Secretary of Homeland Security Chad Wolf requesting a halt to deportations until ICE can ensure all deportees have been tested first. The letter followed previous efforts in the House, led by Rep. Frederica Wilson (D-FL), that had called on ICE to suspend all further deportations to Haiti amid the pandemic.

The deportation of Constant “complicates things on so many levels,” Guerline Jozef, the executive director of the Haiti Bridge Alliance, said. “We don’t know why they are deporting him now, especially understanding the current situation with Haiti’s politics.” Jozef said she is worried that Constant’s return will create even more instability, especially considering his past conviction by a Haitian court.

But for Jozef, whose organization spearheaded a letter last month from 164 organizations calling for an end to deportations during the pandemic, the bigger picture remains halting all such flights. “No matter how you look at it, continuing with deportations means continued exportation of COVID-19 throughout the region.”

Jake Johnston is a Research Associate at the Center for Economic and Policy Research in Washington, DC.