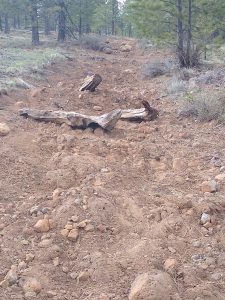 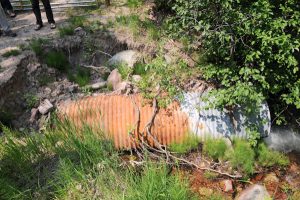 Road culvert washing out in the Swan Valley, Montana. Photo by George Wuerthner. 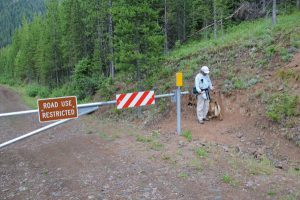 Where ATVs have gone around road closure gate. Photo by George Wuerthner. 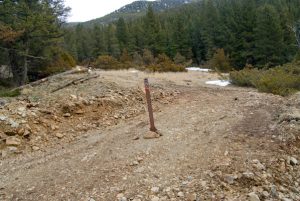 An ineffective road closure–a plastic sign on the Custer Gallatin NF saying the road is “closed” Photo by George Wuerthner.

I recently had a representative of one of the “conservation groups” in the Greater Yellowstone area tell me that they supported logging/thinning on the Custer Gallatin National Forest because the agency was mostly accessing the timber by way of “temporary” roads.

What this fellow conservationist appears to ignore or is unaware of is that temporary roads are nearly as destructive to wildlife and wildlands as a permanent road.

Part of the issue is the vast road network and density that already exists. Some estimates suggest there may be as many as 380,000 miles of roads on our national forests alone. To put that into perspective, that is enough to circle the globe around 15 times! Not all these roads are open to vehicle traffic, but they all impact the forest ecosystem. Adding any new routes—temporary or not—exacerbates the situation.

The impacts of roads are not hidden science. When I was in the U of Montana forestry school way back in the 1970s, Dr. Jack  Lyons published an article in the Journal of Forestry that examined the cumulative effects of road density and how elk use the spaces between them. What he found is evident today, elk avoid roads.

What was an aha moment for me is that he noted that even “closed” roads were not the same as no road. Hunters used those closed roads to access terrain that they might otherwise avoid due to steepness, down timber, or whatever. In other words, a road, even a closed road, provides access, and thus disturbs elk.

Numerous other studies have only reinforced these findings.  For instance, one study in the Journal of Wildlife Management, which used radio-collared elk to determine the relationship between roads and elk distribution, concluded: ” Our study, combined with several previous studies, suggests that substantial shifts in elk distribution away from open roads are a widespread phenomenon.”

Another study published just this year looking at the impact of roads, and motorized use on grizzly bears in Alberta concluded: ” We found that motorized access affected grizzly bears at the individual and population levels through effects on bears’ habitat use, home range selection, movements, population fragmentation, survival, and reproductive rates that ultimately were reflected in population density, trend, and conservation status.”

One of the best overviews was done years ago by Chris Frissell and Steve Trombulak in  Review of Ecological Effects of Roads on Terrestrial and Aquatic Communities in Conservation Biology.

Any conservation representative on collaboratives should read Frissell and Trombulak’s overview to become acquainted with the fundamental problems of roads. They can then graduate up to Richard Forman’s book Road Ecology: Science and Solutions. And my book Thrillcraft: The Environmental Consequences of Motorized Recreation has quite a bit about how roads impact wildlife, and ecosystems.

The idea that an elk or bear displaced by a temporary road can go someplace else assumes there is someplace else to go. If the habitat is suitable for any species, it will already be occupied. In effect, roads reduce habitat quality and quantity for affected species.

Even when a temporary road is closed and “restored,” most remain effectively a transportation corridor that allows people to mountain bike, drive ATVs, or even walk into areas that otherwise would provide refuge and habitat security to wildlife. Most “closures” involve no more than a gate or sometimes just a sign announcing that the road is closed. And numerous studies have demonstrated that such tactics are regularly ignored and violated.

However, the impacts go well beyond the effect on habitat security for elk and grizzlies. I’ve seldom seen restored roads that were fully converted back to the original condition. Indeed, the only place where I have seen this done successfully is in Redwood National Park. In most cases, the road lens is not restored, and the road cut allows sub-surface water to collect on the road pathway, often contributing to increased erosion. The steep side slope of a road cut is one of the reasons why roads are a chronic source of sedimentation in streams, negatively impacting aquatic ecosystems.

Besides, stream crossings usually require culverts—which often block the upstream movement of fish and other aquatic animals and are prone to wash out by storms.

Road surfaces become compacted soil that can last for decades, and thus sheds water instead of allowing it to soak in, again contributing to more gullying and erosion.

Roads are one of the main vectors for the spread of weeds flammable grasses like cheatgrass that thrives on disturbance.

Roads are also associated with higher human ignitions. Again, even closed roads provide access to areas that might otherwise not see human use.

Then there is the issue of how roads affect fire spread.  Several studies show that the area exposed by the roadbed heats up faster than shaded forests, thereby providing a suitable pathway for fire spread. The roadbed also facilitates the flow of warm air into forested stands, again creating conditions more favorable to fires.

Roads also scar the landscape. A frequently ignored aesthetic impact is the horizontal line across a hillside as if no one sees the road crossing the landscape.

Finally, since “temporary” roads are not expected to be used as long as a “permanent” road, they are built to lower standards, thus more susceptible to blowouts and other erosion during storms and floods.

Anyone who asserts that thinning or logging is OK because there are “only” temporary roads is demonstrating their overall ignorance of ecology and ecological impacts.