In a Time of Increasing Polarization in Kashmir, Evoke Those Scholars and Saints Who Symbolized Pluralism 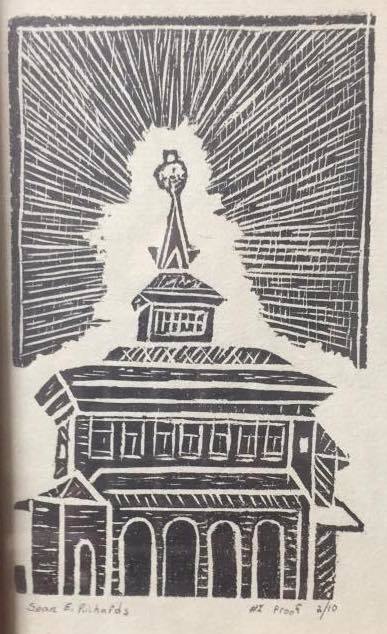 Print of Khanqah-e-Mualla, Shrine of Mir Sayyid Ali Hamadani, on the banks of the Jhelum in Srinagar, Kashmir.

On the annual Urs (birth anniversary) of Ameer-e-Kabir Mir Sayyid Ali Hamadani, I am reminded of those whose unshakable faith in providence provides them with an anchor in challenging times.

I sincerely hope that I imbibe the faith with which my father reveres Ameer-e-Kabir, who is an integral part of the Kashmiri culture that I knew and was raised in.

Ameer-e-Kabir, Mir Sayyid Ali Hamadani, is a fitting symbol of our syncretic ethos.

In fact, educated Kashmiri Muslims are of the firm opinion that the verses which Lalla-Ded composed after having forged a spiritual alliance with Ameer-e-Kabir and other Muslim scholars reverberate with Islamic thought.

Lalla-Ded, a figure revered by both the Pandits and Muslims of Kashmir. Lalla-Ded was born in 1334 into a Kashmiri Brahmin home in village Simpur, about four miles from Srinagar, the summer capital of Kashmir.

She intervened in patriarchal national history by speaking from her location about the political realities that had woven the web of prevalent social relations. Lalla-Ded’s ability to be alert to how a woman’s aspirations for personal emancipation are mediated by her responsibility towards her community, and the ways in which this sense of responsibility inflects her own emancipatory thought, underscores her importance for me. She rejected a sexualized persona in order to break the power nexus that underlined the objectification of “the damsel in distress.”

Although a Sufi mystic, childless Lalla-Ded eroded the construct of woman as goddess or mother that binds her to a form of subordination that is the ultimate paradigm of social relationships in traditional societies.

Most historians are of the opinion that Sheikh Noor-ud-Din Wali, the founding father of the predominant Sufi sect in the Kashmir Valley, Rishiism, acknowledged Lalla-Ded as his spiritual mentor. There is a legend that the infant Noor-ud-Din adamantly refused to be suckled by his mother, Sudra. When the infant was brought to Lalla-Ded, she reprimanded him for his rejection of nourishment. Subsequently, the boy allowed his mother to nurse him. Later, Lalla- Ded facilitated Sheikh Noor-ud-Din Wali’s immersion into the intellectual radicalism generated by her philosophy of Religious Humanism. The recorded poems and paradigmatic sayings of Lalla-Ded and of Sheikh Noor-ud-Din Wali enrich Kashmiri literature and add layer upon layer to the culture.

In a conversation with me, Mohammad Yousuf Taing, former Secretary of the Cultural Academy and Director General Culture, J & K government, elaborated on Lalla’s deconstruction of traditional societal mores through her verse:

‘Lalla’s impact on Kashmiri mind and literature would not have been as pervasive if she had only assumed the role of a preacher of traditional thought. She is primarily a poet and then a preacher. The ecstasy of her poetic expression and its inherent Rasa is of such  quality that the preacher assumes the role of a bard. It surmounts the barrier of religion and has a universal appeal. That is the reason that she has dominated the poetic space in Kashmir for 700 odd years. Even in the twentieth century a modern poet like Mirza Arif (1910-2004) could proclaim;

Lalla’s image as a nude ascetic roaming and dancing around takes her beyond the realm of the ordinary. She emerges as an eternal bold rebel who transcends the mores and rules of tradition, and is still accepted as a person of unblemished spiritual grandeur. It is significant that she gives up this nude dance when she recognizes a true man of God. It is a beautiful metaphor that when she saw Mir Syed Ali Hamdani, the great Muslim saint (717-786 Hijira) she hastened to jump into a baker’s oven. When she came out, she was in  beautiful bridal apparel and  exclaimed,

“I have seen a true man after all, hence this dress.”’

Mir Sayyid Ali Hamadani, Ameer-e-Kabir, played a significant role in raising consciousness and in questioning those sociocultural practices that benighted the masses.

Scholars like Ameer-e-Kabir achieved the ideal of self-realization, which did not require self- mortification but the proverbial endurance of Sufi saints and prophets.

The teachings of scholars like Ameer-e-Kabir reinforced the pride that Kashmiris took in inhabiting a cultural space between Sufi Islam and Vedic Hinduism.

The traditional communal harmony in Kashmir enabled the peaceful coexistence of Muslims and Hindus, mutual respect for their places of worship, and an ability to synthesize not just cultural but religious practices as well.

Deep reverence for each other’s shrines and the relics housed in those shrines was a well entrenched aspect of the culture that I was raised in.

In fact, those who conformed to extreme/ puritanical forms of religion and labeled those who disagreed with them as “heretics” were considered the fringe. Now that this fringe, unfortunately, is being mainstreamed in Kashmir as well as in mainland India, we need to evoke those scholars and saints who symbolized progressive religious thought and pluralism.