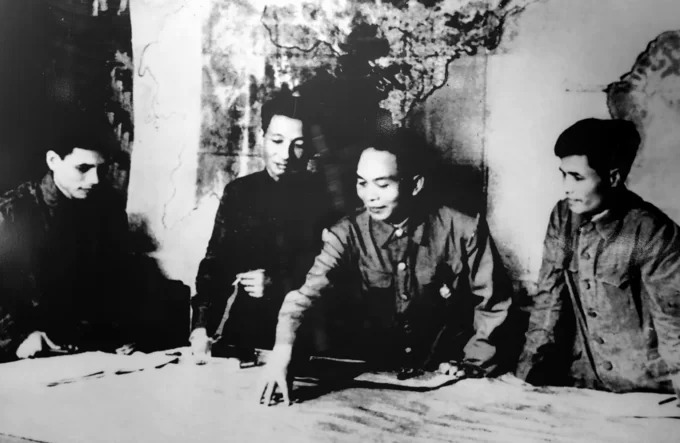 Six years have passed but the memory of the great general’s death and funeral are still fresh in my mind.

While thousands upon thousands of Vietnamese waited patiently under the still potent autumn sun to bid a final farewell to their national hero, General Vo Nguyen Giap, who lay in state at the National Funeral Hall in Hanoi, I stood within view of his flag-draped coffin. It was a moment steeped in irony that I, as a U.S. American, a friend of Vietnam, and the only non-veteran among the members of our small U.S. delegation, had the honor of paying my respects.

While waiting to go inside, my friends and I noticed a Westerner precariously perched on the back of a stone bench, camera in tow, surveying the scene. I also recognized the name on her press credential: Catherine Karnow, National Geographic. Thanks to the introduction of her father, the late Stanley Karnow, journalist and historian, she was the only foreign photographer allowed to accompany the general in May 1994 to Dien Bien Phu, where he had defeated the French 40 years earlier. Catherine had booked a last-minute flight to Hanoi to cover the story of a lifetime and to pay her respects. For her it was both business and personal.

When the time came, sooner rather than later, we were ushered into the funeral hall, where I bowed my head, said a silent prayer, expressed my condolences to some members of the general’s family, and recorded a few of my thoughts in the official guest book. It was for me a deeply moving experience. I had no cultural frame of reference through which to filter the pervasive sadness and sense of loss because there is no one like General Giap in the annals of U.S. history, certainly not in my lifetime. I know for my friends, who had once fought in a war that traumatized and transformed them, emotionally and spiritually, and who now call Vietnam home, it was a very special moment.

While General Giap was alive, I would often drive by his house at 30 Hoang Dieu Street, solemnly aware that we lived in the midst of a living legend, a man who changed the course of history, and who made Vietnam and the world a better place. He remained active and selectively outspoken well into his 90s, urging the government to reconsider its plans for a large Chinese-sponsored bauxite mine in the Central Highlands because of environmental and security risks, and speaking out against bribery, corruption, and other burning issues of the day.

Like Ho Chi Minh, General Giap was also concerned about education, expressing his support for an increase in educational exchanges between Vietnam and the United States and sending more Vietnamese to study there, as evidenced by a Wikileaks cable that revealed the content of an April 25, 2008 conversation between the general and then Ambassador Michael Michalak.

General Giap was a patriot who loved his country and, like good patriots, wanted it to be better than it was, knowing full well that his wish was within the realm of possibility. After spending decades fighting for its independence and sovereignty, he also rejoiced at what Vietnam was able to achieve in peace. His was a life of sacrifice, civic-mindedness and simplicity – a life well-lived. In that respect, he is a role model for all of us, regardless of which passport we carry.

As one of the most highly educated of Vietnam’s revolutionary generation, General Giap could have been a history professor, journalist or lawyer, had it not been for the French and, after them, the U.S. Americans. Instead, like so many of his generation, he was forced to study and practice the art and science of war, endured unimaginable personal suffering (e.g., his father died in prison and his first wife, Nguyen Thi Quang Thai, the younger sister of the revolutionary Nguyen Thi Minh Khai, after whom many streets are named in Vietnam, died in prison after being tortured) and witnessed the collective suffering of his country. He learned well, persevered and, in the end, prevailed, as did Vietnam.

Early the following morning, we awoke to the funeral procession winding its way through the tree- and people-lined streets of Hanoi en route to the airport for the general’s final flight home and afternoon burial in a family plot overlooking the sea in his hometown in Quang Binh Province in central Vietnam. I felt sad yet inspired.

Catherine Karnow, who was later interviewed about her friendship with the general and his family, and her special relationship with Vietnam in a nationally televised show broadcast on May 7, 2014, the 60th anniversary of the victory at Dien Bien Phu, had this to say about her experiences during this surreal time:

“What a heady time, what a whirlwind. The thousands who gathered to come pay respects and say goodbye to the general, both in Hanoi and in Quang Binh Province: I have never seen anything like it. Everyone was astounded, including the family. One grandson of General Giap told me, ‘I am exhausted, but so very proud. The people loved my grandfather so.'”

Vietnam and the world need more men and women with General Vo Nguyen Giap’s leadership, common touch, and devotion to the common good. His death brought Vietnamese of all ages and from all walks of life together. For a week, Vietnam was unified in heart, mind, and spirit. For a week, some of us caught a glimpse of what could be.