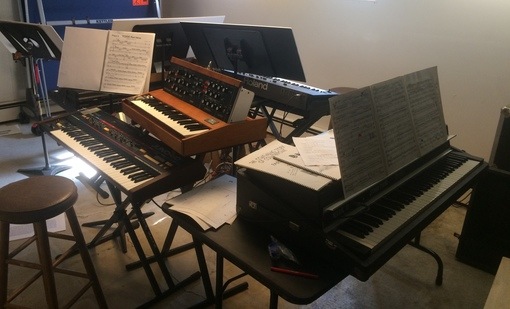 Not long after humans landed on the moon, Robert Moog’s synthesizers landed near the top of the charts. A month before Apollo’s lunar module had touched down at 41 degrees north and 26 degrees east on the Sea of Tranquility in July of 1969, Wendy Carlos piloted the many modules of Moog’s modular synthesizer to the most distant coordinates ever imagined for the music of J. S. Bach: reanimated by Moog’s invention, Bach’s Inventions (along with a sinfonia, chorale prelude, chorus, and concerto) broke through to Billboard’s Top Ten in April of 1969. In the fall of that year Moog’s synthesizer climbed to no. 1 with the release of the Beatle’s Abbey Road, fifty years ago this month.

Checking in with ground control at the Canadian Broadcasting Company, that most gifted of musical space cadets, Glenn Gould extolled Carlos’s Switched-on Bach as “the record of the year — no, let’s go all the way, the decade.” Gould stopped short of saying the “century” or even “millennium,” both then nearing their end. The decade in question was safe: Gould’s two famed (to some, notorious) recordings of Bach’s Goldberg Variations were made in 1955 and 1981.

Carlos’ disc had been issued in 1968, the same year the Byrd’s had used Moog’s new machine for their “Space Odyssey.”  But synthesized Bach was the real music of the heavens. Here’s betting that Switched-on Bach had more than just a subliminal effect on the Cornell astronomer Carl Sagan, who put a bunch of Bach on the Golden Record carried towards the cosmos by both Voyager spacecrafts launched in 1977 and now gliding through the airless beyond of interstellar space to the silent strains of the second Brandenburg Concerto.

Moog had long had an ear for the celestial. As a teenager in the early 1950s he began making and selling Theremin kits. While pursuing a Ph.D. in physics at Cornell in the 60s, Moog dedicated himself to developing his synthesizers just up Lake Cayuga from the university in the village of Trumansburg. These revolutionary devices have secured him his place among—perhaps atop—the most important inventors of musical instruments of the last century.

While Billboard charts and lunar surfaces were being probed, deeper insights and bolder advances were being achieved not in the heavens or the headlines but in Moog’s shop down on planet earth.

A musical avant-gardist with an abiding admiration for past masters from Bach-and-before to Count Basie-and-after, composer-keyboardist David Borden had been blown into Ithaca by Cold War winds and monies. After musical studies at Eastman, a Fulbright year in Berlin before the Wall went up, and graduate work in composition at Harvard, Borden arrived in central New York under the auspices of the Ford Foundation to teach in the public schools. Eventually he was hired as the founding director of electroacoustic music at Cornell, a position he held until his retirement in 2005. Friend of Philip Glass, John Cage, Merce Cunningham, and sometime accompanist of pioneering modernist choreographers Ruth St. Denis and Ted Shawn, Borden’s art and interests do not obey categories and commonplaces.

From 1967 to 1971 Borden learned what he calls “synthesizer technique” directly from the inventor himself, a life-long friend until Moog’s death in 2005. At the Moog shop Borden had a key and carte blanche. He was the Samsonite gorilla of the synthesizer. If it could be broken, he would break it. If there was a way to be flummoxed by the new technology, Borden would find a way to be flummoxed. Moog benefitted, too, from this beta-testing à la Borden. The keyboardist-composer’s always brilliant, but often baffled confrontation with the electronic medium of his art continues, now fifty years after founding the world’s first synthesizer trio, Mother Mallard’s Portable Masterpiece Company in that same modular year of 1969.

Borden’s vast corpus of music, both for electronic and “traditional” (though his work breaks down that often arbitrary distinction) is always intelligent but never snobbish, seemingly mechanistic, but also deeply expressive—not through Romantic surges of sound but by allowing emotion to find its own course through myriad, ever-shifting patterns. Though Borden’s compositions can seem serious and governed by a logic, there is a thrumming chaos behind the sheen of efficiency: chance and calculation in continuous flux, oscillating like the oscillators within the Moog synthesizers themselves. Borden’s irreverent humor (often delivered with the canny application of his native Boston accent) and his interest in the irrational enliven his musical genius and his admirable ability to resist and recast convention.

His sprawling twelve-part masterpiece The Continuing Story of Counterpoint reflects these dualities:

“The Continuing Story of Counterpoint (hereafter referred to as TCSOC) was begun in 1976 and completed in 1987, and derives its title from several sources. At Phil Glass’s Town Hall concert of 1974 he and his ensemble premiered a couple of pieces from a new cycle he called Another Look at Harmony. These pieces later became assimilated into Einstein on the Beach, but the original title struck a chord with me. My approach had always been contrapuntal, so I filed away in my mind the idea of using the word counterpoint in the title of a future series of pieces. When I actually started composing the first of these pieces (1976) the soap opera parody Mary Hartman, Mary Hartman was becoming a huge success on television. This gave me the idea to give the series a title that sounded like a soap opera. And lastly, although it was purely subconscious, I think I must have had The Continuing Story of Bungalow Bill, the title of a tune from the Beatles White Album floating around in my psyche somewhere. It fit the bill perfectly. It didn’t sound didactic, it alluded to history, and it contained a few multi-syllabic words instead of those awful one-word titles of foreign origin used by so many academic composers.”

Borden claims not to hear function—that goal-oriented drive of one chord towards the next. Instead he perceives each sonority as autonomous and therefore free from the perceived obligations that have accrued through centuries of accepted practices in European art music. But this does not mean his music is fragmented. Paradoxically, it speeds along often with unabashed virtuosic flamboyance, the six hands of the three keyboardists at maximum speed or holding long-note skeins that suggest melody, but are too drawn-out and partial to cohere. The music doesn’t coerce one into hearing a certain way, but rather offers, even encourages, myriad routes through its labyrinths. The notation is exacting, but the sonorous result refuses to be fixed by human perception.

The mind imposes its own momentary order on the ever-changing soundscape. The fingers require hours of repetitive practice to learn the patterns with sufficient rigor to make it through some of the Continuing Story’s epic movements extending to a quarter-of-an-hour. There is the time necessary to coordinate the ensemble.

Those digits must often ignore the cognitive impulses of the brain hearing for the first time (even after dozens of rehearsals and performances) suddenly different shapes in the music. Performing Borden’s music is often an exercise in concentrating intensely while simultaneously letting go of control lest the muscles, distracted by the ears, misfire and derail the speeding contrapuntal train. I’m not sure whether that means relying on the Cartesian separation between mind and body, or dismantling it.

I joined the ensemble in 2000; a few years later we had gone fully digital. This development allowed the group to travel more easily for appearances in New York City and elsewhere, and even to the famed festival of electronic music, BERLIN ATONAL in 2015. (A review in the Guardian can be read here.)

In this Mother Mallard’s fiftieth anniversary, one that also allows us to celebrate David Borden at 80, we have gone back to those analog days by reassembling the original gear—Minimoogs, a Moog Voyager, a pair of Juno synthesizers, a Fender-Rhoades piano, and an RMI keyboard. At Cornell’s Barnes Hall and Johnson Art Museum Mother Mallard we will perform the Continuing Story of Counterpoint in two November concerts.

A half-century has passed since 1969, but time will never catch up with this music.