Hong Kong: Their Head-Bashers … and “Ours” 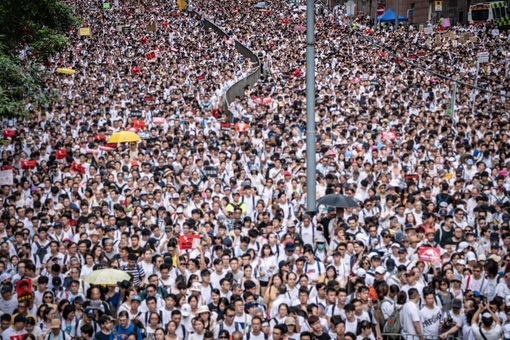 I don’t claim to know enough about the situation Hong Kong to render a definite opinion about the true sources of the citizen uprising there. My sense, however, is that while the roots of protest movement are probably largely indigenous, the US has opportunistically latched itself on to the cause of the protestors, and is probably providing them with logistical aid, because it sees this as a way of giving its prime geopolitical rival a big black eye.

What I do know, however, is that last Thursday Google deplatformed 210 pro-China, and anti-protestor YouTube channels (Google owns YouTube).

Here is the company’s explanation for the move:

“Earlier this week, as part of our ongoing efforts to combat coordinated influence operations, we disabled 210 channels on YouTube when we discovered channels in this network behaved in a coordinated manner while uploading videos related to the ongoing protests in Hong Kong. This discovery was consistent with recent observations and actions related to China announced by Facebook and Twitter.”

That a company led by supposedly sophisticated people could issue such a feeble justification for gross censorship and apparently get away with it is a testament to the dramatic decline in the generalized critical capabilities of the populations of the US, and increasingly, its tag-along vassal states in Europe.

I could go on a long rant about the fact about how there is not, nor has there ever existed at any time in history, anything resembling neutral speech, that is, speech that does not influence its hearer to view reality from one point of view or another, and that to suppose, therefore, that some speech is pristine in its objectivity while other speech is biased and thus in need of paternalistic excisions, is to demonstrate the existence of a mind trapped in a state of learned helplessness.

Or I could encourage you to fixate of the patent hypocritical absurdity of the charge that the Chinese are engaging in “coordinated influence operations” over the matter of the Hong Kong protests. To live in contemporary society is to live under a constant onslaught “coordinated influence operations”. And they are not, contrary to what many people think, limited to the incessant peddling of largely unnecessary commercial products. The US government takes the task of managing the perceptions (as in “perception management”) of the home population very, very seriously and spends billions of dollars annually to achieve this aim. Do you really think the big-media unanimity on the non-existent weapons of mass destruction in Iraq, or the recent Russiagate hoax were achieved in the absence of bribery and/or very well planned pressure campaigns upon people and corporations?

No, I’ll spare you all that and simply remind you that the drive for democracy and greater self-governance in Hong-Kong is one of several such movements currently taking place around the world, and that that very few of the governments seeking to stamp them out have, to my knowledge, been the object of Google deplatforming.

For example, just under two years ago, millions of Catalans participated in a vote to secede from Spain. In the half decade or so leading to that vote, the Catalan regional government repeatedly asked the Spanish government to allow a state-sanctioned, Scottish-style, referendum on the matter. The Spanish government simply said “no”….again and again.

So, after two consecutive elections in which independence parties gained a majority of votes in the regional parliament, the Catalan president, Carles Puigdemont, decided to call a referendum anyway. However, since central government officials had warned him that they would consider the use of any public funds on the vote to be a criminal offense, he left the organization and financing of the event wholly in the hands of the Catalonia’s powerful web of civil society groups.

In the very early morning hours of October 1st, 2017, legions of citizens headed to the polls to vote. As they did, the threat of state violence hung in the air thanks to the presence in on a ship in Barcelona’s harbor of some between 4,500 and 6,000 heavily armed national policemen and civil guards. However, the vast majority of the civil society activists and the voters—part of a movement that is absolutely unequivocal in its devotion to non-violence—thought that, with their understanding of, and training in, peaceful resistance, they would be able to defuse any central government attempts visit violence upon them.

They were dead wrong.

As the many videos and pictures taken that day show, the central government police came out swinging. By the end of the day, over a thousand people had been injured, some quite seriously. For example, there were 34 cranial-cephalic traumas, at least one broken femur and several hundred contusions in virtually all parts of the body. In addition to cracking heads and breaking bones, the Spanish “security forces” crashed through windows and doors at polling places and carried off hundreds of thousands of ballots.

In the wake of this assault, the Catalan government pondered what to do moving forward. Should they let this show of force squelch their broadly subscribed democratic movement? Or should they press ahead to a Declaration of Independence on the basis of this now clearly adulterated vote? After much awkward hemming and hawing, they chose the latter route. On October 27th, 2017, the Catalan parliament voted to secede from Spain.

Mere minutes after the vote, the Spanish government, basing its actions on a questionable use of article 155 of the Constitution, suspended Catalonia’s statute of autonomy, thus effectively putting the seven million inhabitants of the autonomous community and their elaborate network of governmental institutions and agencies into central government receivership.

At the same time, the state ordered the arrest of most members of the Catalan executive. Part of the cabinet, led by the Vice President of the government Oriol Junqueras, stayed in Spain and were promptly placed in pre-trial detention. The other faction, led by president Carles Puigdemont went into exile in Belgium.

Having clearly strained their bonds with several EU partners with their October 1st assaults on a rigorously peaceful movement, the Spanish government sought to mollify them by rapidly calling for special Catalan elections. They did so fully expecting that the punished and surveilled electorate of that region would elect a pro-centralist government. However, on December 21st 2017, the Catalans responded instead by electing a pro-independence coalition led by exiled President Puigdemont.

Alarmed that control over the breakaway region was further slipping from their hands, the central government began scrambling for new “solutions” to the Catalan problem. They found them, or so they thought, in the country’s notoriously corrupt and non-independent judiciary. On the eve of what was to be Puigdemont’s telematic swearing-in at the end of January 2018, Judge Pablo Llarena produced a ruling, based on legal principles he invented out of whole cloth, to prevent the event from taking place. This, after he had tried, and embarrassingly failed the month before to get Puigdemont extradited to Spain from Belgium on charges of rebellion and sedition.

Though this legal maneuver did prevent him from occupying the presidency he had earned at the polls, it could not curtail the Spanish government’s increasing irritation with the fact that Puigdemont was traveling around Europe as a free man giving speeches about the authoritarian reality behind Spain’s facade of being a “consolidated democracy”. So, while he was traveling through Germany in late March 2018 after a speaking engagement in Finland, Llarena issued another order for his arrest and extradition.

As was their duty under European conventions, the German authorities detained Puigdemont. But when they German judges looked at the criminal allegations Spain had sent them, they were, like the Belgian judicial authorities before them, dumbfounded by the Spanish judge’s legal “reasoning”. After ten days in prison, Puigdemont was released and was once again free to travel around Europe and tell the story of Catalonia’s democratic movement for independence.

Having had their October gooning defeated by the December elections, and their legal manipulations defeated by the more independent judiciaries of Belgium and Germany, the Spanish government now channeled its energies full force into the game of “perception management”.

In October of 2018, the now Socialist-led government of Pedro Sánchez established a new Secretariat within the Ministry of Foreign Affairs called Global Spain whose explicit purpose was to prop up the image of the country in the face of the damage caused by its heavy-handed attempts to stamp out Catalonia’s organic and widely subscribed movement for independence.

A key part of the program has involved sending government apologists to harass and berate Catalan government representatives (both exiled and non-exiled) during question and answer periods following their speaking engagements outside the country. Arguably more significant than this in the long run, however, has been their completely unsubtle campaign of pressures and threats against any foreign institution willing to give a platform to a pro-independence speaker. The Spanish state has also been caught engaging in unapproved, and therefore illegal, espionage activities on Catalan activists residing in Belgium and Switzerland.

And did I tell you that Global Spain has established a YouTube presence?

While the amount of material they have produced for this medium is not terribly large, and is marked such a level of cheesy boosterism (see here) that it is unlikely to sway many of the unconvinced to their cause, there can be no doubt that it was designed and deployed as part of a “coordinated influence operation”.

And yet I am unaware of any attempt to on the part of Google to deplatform Global Spain from any of its myriad family of media services.

Do you think it might have something to do with the fact that Spain, unlike China, is a part of NATO as well as the ever-ready-to-kowtow-to-America- European Union?

Google, however, which is attached at the hip to the US government by millions of dollars of business contracts, obviously doesn’t see it that way.

Blinded by greed and a provincial myopia, the people there seem to have forgotten that, in the end, the maintenance of a basic level of equanimity before all political factions is the ultimate guarantor of success for a broker of information.

Plying Americans, who have long-lived under the weight of constant hyper-patriotic moralizing, with stories rooted in glaring double-standards is, I hate to admit, child’s play.

You’d think that with all the “diverse” high IQ types they’ve hired, the bosses at Google might have at least one or two on staff who, having read Oedipus Rex in some detail, might be capable of applying its lessons to the present context, that is, who might tell them that trying the same tricks used in the US on more historically-informed populations who have often felt the brunt of US bullying might lead, in the long run, to very different and more disconcerting results.

This, however, does not appear to be the case.