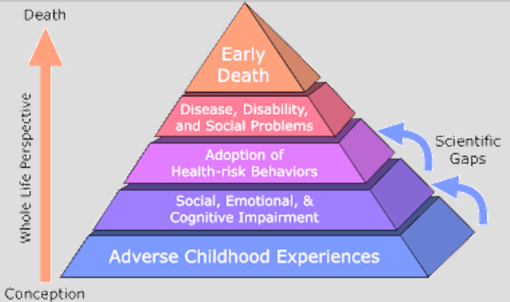 What variable is associated with a 12 times greater likelihood of a suicide attempt—and also doubles the likelihood of cancer, heart disease, or stroke?

In the late 1990s, the Adverse Childhood Experiences (ACE) Study revealed a stunningly powerful relationship between childhood trauma and later adult emotional difficulties and physical health problems. Two decades after the ACE Study was published, it has finally become politically correct for U.S. politicians to acknowledge its significance, and for Congress to respond with legislation. However, U.S. history tells us that even when politicians finally acknowledge an ignored truth, given their allegiance to the U.S. societal status quo, their reactions routinely neglect the most embarrassing implications of that truth—before getting to that, a summary of the ACE Study.

In the mid-1990s, Felitti and Robert Anda (at the Centers for Disease Control and Prevention) surveyed the adverse childhood experiences of 17,431 Kaiser Permanente patient volunteers. Since the average study participant was 57 years old and their adult health status was known, the ACE Study could correlate adverse childhood experiences with adult health status decades later. Of note, this was a middle-to-upper-middle-class population—74% had attended college, and all had higher-end medical insurance.

Subjects were given one point for each Yes answer to the following 10 categories of childhood household trauma, and so their ACE score ranged from 0 to 10:

1. Recurrent emotional abuse such as humiliation (Were you routinely insulted, for example, told by parent you are stupid?).

2. Recurrent physical abuse (Were you beaten with fists or objects, beaten to the point of injury?).

4. Major emotional neglect (Did you feel that no one in your family thought you were important or special?).

5. Major physical neglect (Can you recall not having enough to eat or enough clothing to wear or not being taken to the doctor if you were sick?).

6. Parental absence (Were your parents separated or divorced?).

7. Exposure to domestic violence (Did you grow up in home with a mother who was physically violated?).

8. Household substance abuse (Did you grow up in home with a problem drinker or drug abuser?).

9. Household extreme emotional problems (Did you grow up in home with someone who was suicidal, severely depressed, or diagnosed with severe mental illness?).

ACE findings produced two areas of unexpected results for the researchers. The first area was the prevalence of adverse childhood experiences in a relatively well-off population in the United States. The second area was the strength of the relationship between adverse childhood experiences with adult emotional problems and physical health issues—while unsurprising for many ACE victims, this has been groundbreaking for medical authorities.

Prevalence. More than a quarter of subjects grew up in a household with an alcoholic or a drug user; 23% had experienced severe physical abuse; and 28% of women had been sexually abused as children (16% of men). More than half of the subjects reported at least one adverse childhood experience, and one-quarter reported two or more.

It is important to keep in mind that ACE examined middle-to-upper-middle-class subjects, and we know from other research that abuse and neglect is far higher for children from financially impoverished households (the National Incidence Study of Abuse and Neglect reported: “Children in low socioeconomic status households. . . . experienced some type of maltreatment at more than 5 times the rate of other children; they were more than 3 times as likely to be abused and about 7 times as likely to be neglected”).

The finding that abuse and neglect are so common in well-off U.S. households—where, for example, 28% of girls are sexually abused—is so unpleasant that some defenders of the U.S. societal status quo have attempted to marginalize the ACE study by arguing that it is unreliable because it relies on the memory and credibility of respondents. The reality, Felitti and Anda have responded, is that underreporting of trauma is more likely than overreporting. Common sense tells us that, for example, a woman would be reluctant to discuss her childhood sexual abuse; and my experience of more than 30 years of clinical practice validates Felitti, Anda, and common sense—that underreporting is far more likely than overreporting.

Correlations Between Adverse Childhood Experiences and Negative Adult Health. While apologists of the U.S. societal status quo are embarrassed by the prevalence of adverse childhood experiences for well-off American children, what has been groundbreaking for medical authorities is the finding of such a powerful relationship between childhood trauma and adult serious emotional problems and physical health problems.

Moreover, correlations followed a “dose-response” model, which means that the higher the ACE score, the worse the outcome. So for example, Felitti notes that an ACE score of 6 compared to an ACE score of 0 makes it 46 times more likely that a person will have injected illegal drugs.

The more extensive our childhood abuse and neglect, the greater our lifelong chronic stress, and the more likely we, throughout our lives, “medicate” the emotional pain of unhealed trauma by smoking cigarettes, drinking alcohol, using dangerous illegal and psychiatric drugs, compulsively eating, and engaging in other destructive behaviors. Our physical health is damaged not only by toxins such as cigarettes, alcohol, and drugs; even for those with high ACE scores who don’t engage in these self-destructive behaviors, the chronic unrelieved stress of unhealed trauma increases the wear and tear on the body by, for example, overloading our bodies with adrenalin and cortisol which compromise our immune systems.

In their schooling, my experience is that what has driven adolescents to feel stressed, hopeless, and suicidal even more often than peer bullying are school authorities’ coercions and threats of dire consequences for academic noncompliance and failure. Oppressive psychiatric treatment—e.g., the use of drugs to control bothersome behaviors instead of receiving caring for the emotional pain fueling such behaviors—is also a major adverse childhood experience. The adverse childhood experience that dominated my adolescence was the U.S. state terrorism of the Vietnam War and the draft, which filled me with a chronic fear that I was going to get maimed or killed in Vietnam unless I became a fugitive. Today, many adolescents are overwhelmed with anxiety owing to a range of societally generated terrors—e.g., they are all pressured to go to college but well aware that a college degree may result only in a low-paying job, crippling student-loan debt, and failure to avoid becoming one of life’s “losers.”

For a sane society, the most obvious implication of the ACE Study would be prioritizing the prevention of preventable adverse childhood experiences. A sane society would be asking questions about the very nature of a society and culture that creates so much trauma for children. However, we do not live in a sane society. We live in a society that prioritizes profits for large corporations and power for large institutions. We live in a society in which, for example, the cause of depression and suicide has been, for decades, falsely attributed by psychiatry and Big Pharma to a chemical imbalance theory long known to be untrue—an untruth that has made billions of dollars for drug companies and increased power for psychiatry through increased use of antidepressants which are known to actually increase suicide. This is just one of many examples that we do not live in a sane society.

Owing to the great efforts of Felitti, Anda, and others getting the word out on the ACE Study, twenty years after its publication, it is no longer possible for politicians to simply ignore its findings. In June of 2019, the RISE From Trauma Act was introduced with bipartisan support in the U.S. Senate, its stated purpose: “To improve the identification and support of children and families who experience trauma.” It allocates $50 million in grants, spread over 2020 to 2023, for institutions such as child welfare agencies, hospitals, and schools for research; to build awareness, and to assess, prevent, and treat youth and their families who have experienced trauma or at risk of experiencing it.

In her Mad in America article about the RISE From Trauma Act, Leah Harris provides examples of how states have created initiatives in schools to be more “trauma sensitive.” In response to the idea of creating more trauma sensitive schools, one young man I know with an ACE score of 8—but who feels as traumatized by his school experience as by his household ones—was cynical, rhetorically asking me: “Are schools going to include ACE screening day with lice screening day? Are they going to report ACE scores to parents—parents who will then abuse the kid even more for talking to authorities about their shit parents?”

In response to Harris’s article, there were many comments by Mad in America readers who had negatively experienced psychiatric treatment, and almost all were concerned that the legislation would result in more such treatment that would be re-traumatizing. Felliti himself has concerns about typical mental health services that primarily treat traumatized patients with drugs, noting, “Back when I was at Kaiser Permanente, I was afraid to send patients to psychiatrists.”

In a sane society, treatment for traumatized young people would be quite different than the treatment routinely provided. A sane society would not equate treatment with drugging the symptoms of trauma; and it would not be self-satisfied with quick-and-easy behavioral “trauma informed focused treatments” (such as “cognitive processing therapy” and “prolonged exposure”). A sane society would recognize that real healing involves providing safe, caring, and loving relationships, which may or may not be possible within a paid therapeutic relationship; and so all efforts would be made to re-make society so that safe, caring, and loving relationships could be found in daily life.

A sane society would also be asking this: What is it about U.S. society that creates so many abusive and neglectful adults? A sane society would acknowledge that such adults have themselves likely not only been traumatized as children but continue to be traumatized in their adult lives—e.g., alienated and humiliated in their jobs; and given the general message that they are simply objects and tools, and to the extent that they cannot be used to make some rich asshole even richer or some powerful institution more powerful, they will be discarded. A sane society would not be surprised that such adults often have little patience for the normal but sometimes frustrating behaviors of children, and react with abuse and neglect.