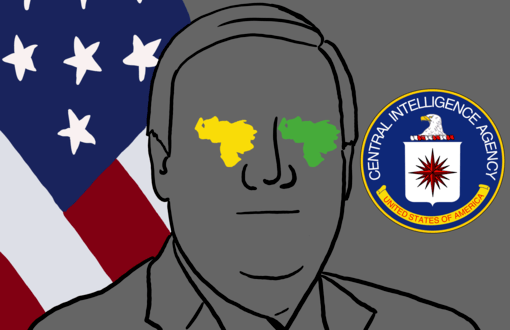 Direct democracy works like a charm. Check out Venezuela’s Communes….

In all likelihood, John Bolton and Trump and Pence and Pompeo and Rubio were shocked beyond recognition by the failed coup attempt they helped orchestrate to overpower a democratically elected government south of the border, colloquially known as extending the concept of Manifest Destiny to its fullest extent.

To Bolton’s/Rubio’s dismay, opposition leader Juan Guaidó proved to be a clown dressed up as a proponent of democratic spirits, a motivator, a savior. Well, he’s been tossed into the dustbin as a miserable failure, an international pariah who has been shamed into seclusion. His American co-conspirators look like big fat dupes.

Interestingly enough, the citizens of Venezuela did not answer Juan Guaidó’s official call to assemble, to revolt, and eliminate Maduro, overthrowing the dictator. Those were the instructions to a public that remained dead silent and in place. Nobody showed up for the well-advertised great event, as Juan Guaidó wanted to “Make Venezuela Great Again.”

Only in the U.S. do people fall for such claptrap. Venezuela’s politically astute citizens know hollow sloganeering when they hear it. After all, they have direct democracy that works like a charm, why change anything?

Localized political orders, Communes in Venezuela, have proven to be a safety net for families and their communities. It’s direct democracy at work, and it works remarkably well under the toughest of circumstances, as tough as it gets, which goes to demonstrate the mettle of direct democracy.

As for proof of the effectiveness and importance and steadfastness of Venezuela’s Communes, the Indio Caricuao Commune in southwest Caracas was one of the first targets of Juan Guaidó’s supporters. They looted the Commune and set fire to its headquarters. Local residents used the building for meetings, and it housed a Commune-operated textile mill, which funded projects for the local community.

It’s instructive that Guaidó’s supporters selected a prominent Commune as their first line of attack and not Maduro. Of course, the logical upshot to that tactical move is that they recognized the power of Communes superseding the power of Maduro, which in fact, is the case throughout the country of Venezuela. Maduro is more figurehead than manipulator of the political strings. The people control those strings via direct democracy, by and large, throughout all of Venezuela.

Under the tutelage of former president Hugo Chavez, Communes were established. He viewed the Communes as “fundamental building blocks of a new communal state” based upon self-management by local democracy, by local communities.

Nowadays, according to Venezuela’s Ministry of Communes, the country has nearly 47,000 registered communal councils throughout the country and close to 3,000 Communes. The Communes have been consolidating their networks now for over a decade and represent a powerful force in the country, arguably, more powerful than President Maduro.

According to Commune leaders like Gsus Garcia of the Altos de Lidice Socialist Commune, they acknowledge that Chavistas (Chavez supporters) were at the heart of creation of Communes, but the Communes include residents that oppose Maduro and some that favor him. Their focus is on their local community, not on Maduro. (Source: Frederico Fuentes, Venezuela’s Crisis: A View From The Communes, Countercurrents, May 12, 2019)

A prime example is the Panal 2021 Commune, c0nsisting of 3,600 families. The Commune initially funded itself by holding raffles and received state funds, but now it is self-financing and self-managed. Panal 2012 has (1) its own bakeries, (2) a textile mill, (3) a sugar packaging plant and (4) an expansive food storage and distribution centre to make sure no families go hungry.

Proceeds from communally operated businesses are deposited in a communal bank with citizen’s assemblies deciding how to redistribute funds for community projects. It is direct democracy at work.

Similarly, all across the land, Communes generate their own revenue and take care of their local communities. No state funds needed. Not only do Communes take care of local communities, but the Communes have also resorted to feeding urban centers that are not organized, as Panal 2021 linked up with other Communes in the countryside to bring food to the cities and sell it at much cheaper prices than private supermarkets. Thus, Venezuelans are fed via direct democracy at work.

According to sources in Venezuela: “Regardless of what happens next in Venezuela… the strong level of community organization built up over the past two decades will not go away easily. There’s still a lot of strength, a high level of organization. Wherever you look, you will find a commune, a cooperative, and some kind of committee or organization… If [the government] was to fall, that organization will still be here; this huge spirit of participation will still exist, and it will be a problem for any government that tries to dismantle it,” Ibid.

It is likely that international media sources have mischaracterized the status of Venezuela with a feeding frenzy of falsehoods that simply fed on its own storylines. But, then again, that’s the new normal.

Meanwhile, in spite of extreme dire circumstances, and including some cases of people suffering, by and large, Venezuela is beholden to Communes that take care of their own communities, feed them, clothe them, doctor them, and protect them, families working together to determine their own destiny.

Postscript: On Contact with Chris Hedges interviewed reporter Ben Norton, who spent one month in Venezuela. That video can be viewed here: https://www.youtube.com/watch?v=23H-HNYmDnc