Robots in the Vast Memory Palace of Myth 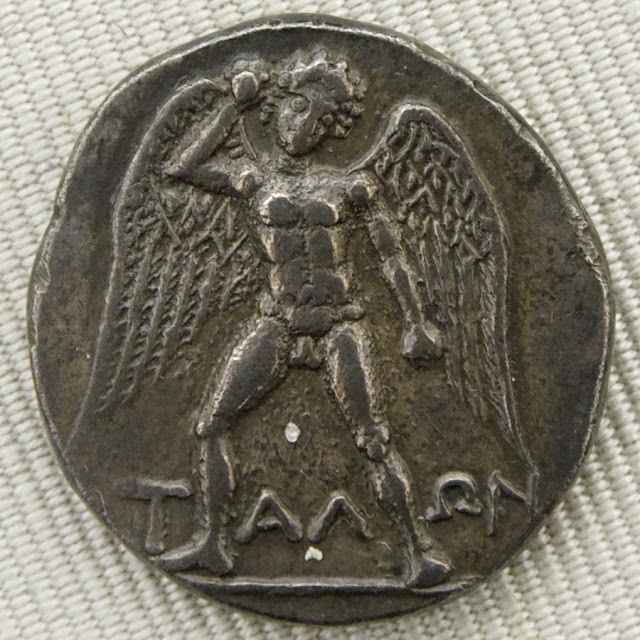 Greek myths are not fiction. They are extremely ancient stories that preserve memories and history.

Ancient Greeks thought of myths and history as complementary narratives speaking to them about their gods, heroes, traditions and civilization. In fact, the Greeks understood mythology as early history. This early history (myths) explained their origins and the origins of the gods, and tied all that to the origins and workings of the cosmos.

Philosophers-scientists and poets fashioned their theories, models and dramatic plays from myths. In fact, myths include valuable insights on what the Greeks eventually did in politics, theology, and all fields of knowledge, including science and technology.

Gods of science and technology

Myths exalt  the gods for being like humans but possessing virtue, beauty, goodness, immortality and immense power: everything humans would also love to have. Myths also reveal that some gods had special affinity and liking to craftsmanship and techne, science and technology: Prometheus, Hephaistos, Metis and Athena.

Prometheus brought light and fire (knowledge) to humans, securing their survival and civilization. Hephaistos was above all fire, the volcanos and the natural forces of creation and destruction. He was  the perfect metallurgist, craftsman and inventor who toiled in the making of useful tools, weapons, shields, robots and machines governed by Artificial Intelligence. Metis, a water goddess, was the icon of intelligence. Zeus married her; and, to guarantee he would remain supreme, he swallowed her. That’s why Athena, daughter of Metis, goddess of the olive tree, and the arts of civilization, came out of the head of Zeus.

These stories of mythology became the metaphysics that inspired the Greeks to think about thinking: try to know themselves; ask questions about the workings of society and the cosmos, and slowly develop philosophy, science and technology.

This was a chronic and complicated process of evolution. The Greeks were not many, not well organized, and lived in hundreds of poleis (city-states) all over the Mediterranean. However, they reached high levels of civilization. And with Alexander the Great, they spread their civilization throughout the world. In fact, from the third century to the first century BCE, they sparked a golden age of science and technology in Alexandria, Egypt.

However, the Romans entered Greece and the Alexandrian kingdoms that replaced the empire of Alexander. Then, in the fourth century, the forced Christianization of Greece struck the country like a cataclysm. Even myths faced extinction. Church fathers destroyed and defamed Greek myths, branding them lies and falsehoods.

The mythic and iconographic depictions of Hephaistos or Prometheus or Athena designing exquisite art and mechanical devices like robots or humans are not always restricted to gods. A few human heroes like Daidalos created god-like works of art and engineering.

Daidalos, a genius in art and technology, sculpted statues that barely differed from live human beings. Daidalos was Athenian who worked in the second millennium BCE for Minos, king of Crete. He built a cow-sex machine for Pasiphae, wife of Minos, and designed the Labyrinth for the safe keeping of the monster Minotaur. He also constructed an impregnable acropolis for King Kokalos of Acragas (Agrigento), a Greek polis in Italy. He pioneered human flight imitating birds.

Minos was the son of Zeus. He had access to power. Hephaistos crafted the bronze android Talos for Minos. The robot was a mighty mechanical giant protecting Crete. Talos would keep walking and flying over Crete and would kill any intruder unwelcomed by Minos.

Yet Talos met his match when Jason and the Argonauts landed in Crete. Medea, daughter of Aeetes, son of the god Sun-Helios, and king of Colchis in the far east of the Black Sea (the Greeks’ Welcoming Sea), undid a bolt in the foot of the robot, bringing its end.

Gods and robots — yesterday and today

These interesting mythic stories — with clues on crafted, not born, life like robots and automata – are the subject of a lavishly-illustrated, timely, insightful and well-written book by Adrienne Mayor: Gods and Robots: Myths, Machines, and Ancient Dreams of Technology (Princeton University Press, 2018). Mayor is a research scholar in classics and the history of science at Stanford.

Yet her understanding of myths is limited. She considers myths about artificial life nothing more than cultural dreams: “ancient thought experiments, ‘what if’ scenarios set in an alternate world of possibilities, an imaginary space where technology was advanced to prodigious degrees.”

She admits, however, that many of the automata and mechanical devices actually built in Greece and Rome “recapitulate myths.” Yes, they do.

Even the awesome cosmological computer built in all likelihood in Rhodes in the second century BCE is a testimony of the power of the prevailing mythic and heliocentric cosmological vision of the heavens in the third century BCE. That vision inexorably gave birth to scientific technology as we know it today. No wonder the Greek computer, dubbed Antikythera Mechanism, brought the heavens down to Earth.

Mayor does not see such cosmic movements. She does not see a free flowing highway of ideas from mythic machines to real machines or direct connections between ancient and modern technology.

“This book is not intended to suggest direct lines of influence from myth or ancient history to modern technology,” she writes.

Despite this limited blind spot to the workings of mythology in the making of scientific technology in ancient Greece, and to the founding of modern technology on the pillars of Greek science and technology, Gods and Robots is an absorbing and important book on myths and robots in ancient and modern times.

In fact, Mayor has a remarkable agenda. She says she wrote her book as a guide to the perplexed in robotics, Artificial Intelligence machines, biotechnology, driverless cars, and machine learning.

On “deeper levels,” she says, “the ancient myths about artificial life can provide a context for the exponential developments in artificial life and Artificial Intelligence – and the looming practical and moral implications.”

Read Gods and Robots. It’s a welcome food for thought in our desperate and dangerous times. The Greeks at least had Prometheus warning them not to open Pandora’s box. But who is doing that now about AI ( and so many other hazardous technologies) slowly seeping out of the new Pandora’s box?