Remaking the Common Good: the Crisis of Public Higher Education in Colombia 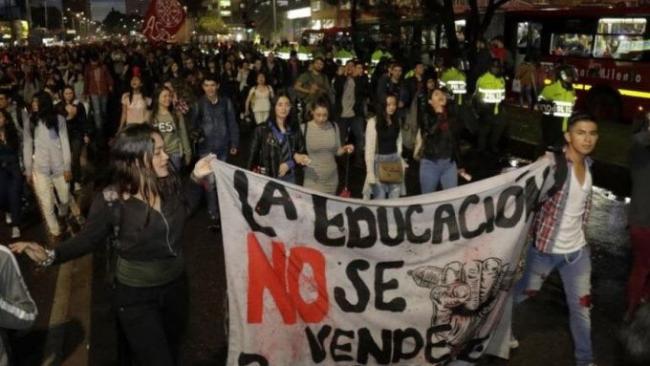 “Let’s hope that by the time [President] Duque decides to listen to us, it’s not too late.”

On October 10, with the support of rectors, administrators, and professors, Colombia’s students called an indefinite strike in the country’s 32 public universities and took to the streets in most major cities to protest government de-financing—thereby injecting new, much-needed life into a highly militarized, authoritarian, neoliberal society and political system. Hundreds of thousands mobilized across the country, including private university students marching in solidarity with public university students.

Concretely, students are demanding an additional $1.4 billion dollars from the government in the course of ten years, a doubling of its research budget, a freeze on tuition fees, the refinancing of student loans at a zero percent interest rate, preservation of funding for vocational and technical schools, respect for the right to protest and voluntary rather than mandatory accreditation. Together with professors, they claim that Colombia’s public universities have a deficit of $4.7 billion dollars in infrastructure and close to $1 billion dollars for operating expenses, while technical and vocational schools need an additional $500 million dollars. Both are also calling for the recognition of higher education as a universal, inalienable right, for greater autonomy and self-government for students, professors, and administrators and for the production of scientific, humanistic, and artistic knowledge, with the aim of overcoming the legacy of decades of violent conflict and reducing aberrant levels of inequality. 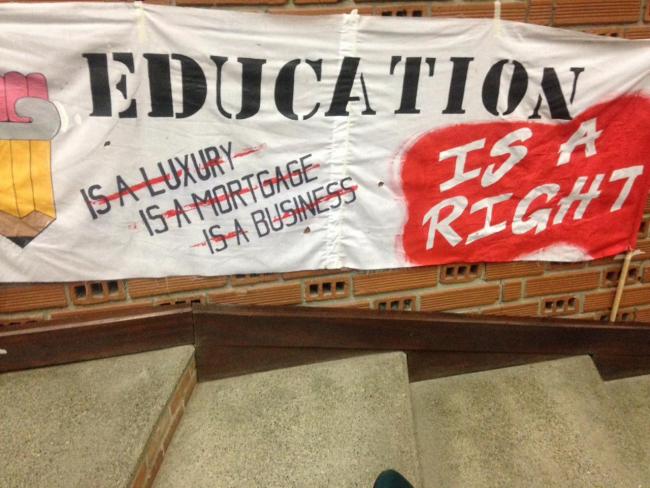 A banner written by the students of the Universidad de Antioquia, who kicked off the strike three months ago, before it went national. (Photo by Forrest Hylton)

Colombia has not seen such massive protests in defense of public higher education since 2011, when students, supported by professors, successfully prevented the government of President Juan Manuel Santos from moving towards privatizing public universities. But beginning in 2014, the government has designed a massive subsidy program for private universities that has so far led to an exodus of thousands of poor and working-class students out of relatively inexpensive public universities into increasingly expensive private ones.

Part of the answer is political and ideological: international financial institutions, neo-classical economics, neo-institutionalism, and rational choice imported from U.S. universities—and pervasive in Colombian private universities—guide the Colombian government in their thinking about public services. Private universities supply the people who formulate public policies that apply a capitalistic lens onto the common good of higher education. The job of the state, in this vision, is to provide credit, security, and property rights, subsidizing the entry of the poor intro competitive markets to determine quality as well as the ability to pay tuition and fees. The devil is in the details of the 1991 Constitution itself, specifically in Articles 67-69, which state that the role of the Colombian state is to help individuals and families by regulating markets between public and private universities. In this dynamic, private institutions are systematically favored through accreditation based on criteria for “academic excellence” imported from the United States, in order to create a fiction of a meritocracy in one of Latin America’s most unequal societies in the world’s most unequal region.

The gutting of Colombian public universities was part of the process of deepening the militarized, extractive, rentier model of capital accumulation by paramilitary death squads that first reared its head in the late 1970s and was consolidated in the 1990s. In 1992, as part of the neoliberal restructuring of Colombia´s economy and state institutions, the government of President César Gaviria froze the budget assigned to public universities, forcing them to seek external resources to function. This became increasingly difficult amid growing student enrollment and rising costs for research, infrastructure, and staff. In the mid-1990s, several public universities were forced to close, while others began to cut back on student residences and university cafeterias and to hire more and more adjunct professors, who, like their counterparts elsewhere, make up the majority of total faculty and work under precarious conditions without union protections in Colombia. This sea-change in education unfolded in the larger context of political economic shifts favoring the expansion of mining, hydrocarbons, agri-business, urban real estate, and financial services in the Global South, and the development of technology and intellectual property rights at universities in the North, subsidized by governments and linked to multinational corporations.

Under the so-called “educational revolution” launched by President Álvaro Uribe in the early 2000s, public universities in Colombia saw a tripling of student quotas, while their assigned resources were adjusted only by inflation. The Uribe government reforms were a clear reflection of the globally emerging model of higher education under neoliberalism, which was promoted by international financial institutions across the region with varying degrees of success. In this worldview, Colombia’s elite private universities would supply the existing demand for the professional education of the country’s middle class through subsidized credits, while the government’s National Training Service (SENA), together with sub-standard, for-profit universities, would provide vocational training programs for the impoverished labor force in order to increase the competitiveness of the business sector. Public universities would play a minor role at best, which, in part, explains why they have been sidelined by the government in its design of public policies and finances.

Since then, the financial situation of Colombia’s public universities has continued to deteriorate unabated, with less than half of public university budgets presently covered by the government.While in 2000, the government’s contribution to public higher education equaled to 0.55 percent of GDP, since 2015 that number has fallen to 0.40 percent. The growing deficit has led to a process of “informal privatization:” universities have intensified their searches for external resources by selling consultancies, market-oriented extension courses, and graduate programs at market rates, and, increasingly, by establishing research partnerships with large corporations. Additionally, the growing costs of new information technologies, laboratories, professional training, internationalization, and maintenance of the physical and administrative infrastructure have worsened the already precarious disequilibrium between the resources provided by the government and the expenditures necessary to guarantee minimum quality standards.

At the same time, neoliberal reforms have strengthened Colombia’s private universities by extending loans and credits provided by the Colombian Institute of Education Credit and the Exterior (ICETEX), a public institution founded in the 1950s with the initial purpose of offering credits for Colombian students to study abroad. In 2005, under Uribe, ICETEX was transformed into a special financial entity and began to provide loans primarily to poorer students to cover tuition and fees at private universities.

ICETEX obtains loans not only from the Colombian government, but also from international financial institutions such as the World Bank. Indeed, of the $467 million dollars that the World Bank recently loaned the Colombian government to reform higher education, $411 million will go toward making ICETEX the principal subsidizer of private universities, replacing funding that might have otherwise gone to public universities. 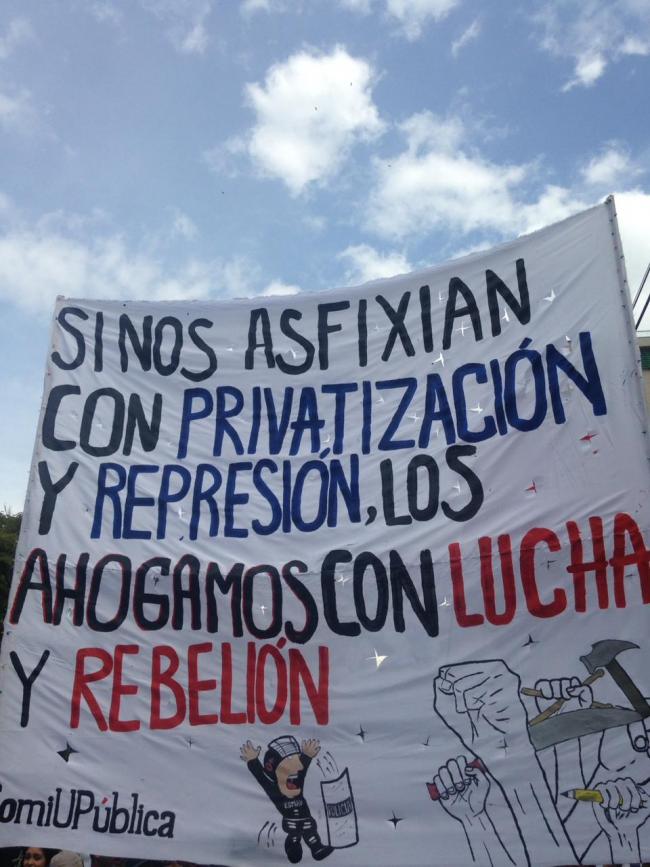 “If they suffocate us with privatization and repression, we will drown them with struggle and rebellion” (Photo by Forrest Hylton)

On November 6, students and professors met with the Ministry of Education for 11 hours and demanded a meeting with President Iván Duque. A week earlier on October 28, university rectors and the Colombian government had passed an agreement stipulating that public universities will receive just an additional $400 million dollars over the next four years, as well as 3 percent above inflation in 2019 and 4 percent from 2020-22—compared to an average rise per year of between 2010 and 2017 of 4.7 percent. In addition, the government will transfer public resources to private universities through a new program of loans and credits, which, if implemented, will lead to increasing student indebtedness.

President Duque refused to meet with the students, instead saying that students needed to thank him for the October 28 agreement. As of this writing, he has declined to discuss the matter further. While he has not met with the students, he has met with pop star Maluma and also plans to meet with Silvestre Dangond, who is closely associated with paramilitary death squads in his home region of Cesar.

Unfortunately, some of the tactics employed at the National University in Bogotá have been misguided and even dangerous, considering the political climate. On November 7, students stormed administrative offices where Rector Dolly Montoya and other top-level administrators work, forcing all university employees to leave until further notice. Hence the university will not be able to provide workers with their next paycheck or comply with any of its contractual obligations in peripheral, conflictive regions like Tumaco. Students involved in the Bogotá occupation are therefore hurting the working class in the university, on whose support they must inevitably rely.

Despite good-faith efforts by professors and administrators to mediate, the intransigence displayed could lead anti-riot police (Esmad) to re-take the buildings violently in the name of the rule of law. If continued, the occupation will likely alienate potential allies by playing into media stereotypes of student violence and vandalism, and, as it has in past clashes between masked protestors/provocateurs and Esmad, it could narrow the base of the movement at the very moment when it needs to broaden dramatically.

Since November 8, students, professors, clerical, and service workers have been joined by the public school teachers’ union (FECODE), along with the country’s progressive trade union federation (CUT), which has called for nationwide marches on November 15 and 28 to protest regressive sales taxes on basic foodstuffs and to demand more money for public education, leaving open the possibility of a general strike in December. Together with the CUT, students are building a “Broad Front for Education” in order to address issues related to pre-school, elementary, middle, and high school, as well as university education, and they have three principal demands: to re-open negotiations with the government, specifically with President Duque himself, to ensure the current semester will not be canceled, and to secure guarantees for the exercise of civil rights.

During a march on November 8, those rights were violated by police dressed as civilians who infiltrated the student-led protest march and coordinated with anti-riot police before committing acts of vandalism, which then “justified” the violence against student demonstrators. Three students of the National University in Bogotá went missing shortly after confrontations with the anti-riot police. Thankfully by November 13, they were reported safe and sound. During those days Alejandro Palacio, quoted in the epigraph, a spokesperson for the student movement, received four death threats, several of them in person from masked infiltrators.

Fortunately, the student movement has by and large understood the need to build a wide-ranging coalition. In defending public higher education, it has galvanized discontent in a broad range of groups and sectors, beginning with professors, FECODE and CUT that participated in the marches of November 8. The movement to defend and transform public education reverberates far beyond the student movement itself, leading to the construction of a broad, independent urban Left and a national-popular bloc of the sort not seen in Colombia since the progressive liberal politician Jorge Eliécer Gaitán was murdered in 1948.

The stakes of Colombia’s movement to push higher education, and the country as a whole, in a more democratic direction could hardly be higher, as the drumbeat for a U.S.-led war with Venezuela rises in pitch and intensity, and with Jair Bolsonaro soon to take power in Brazil. Students and professors in the United States and Canada and beyond should show solidarity by following the lead of their Colombian counterparts by moving into the streets.

Forrest Hylton and Aaron Tauss teach, and Juan Felipe Duque Agudelo studies, in the Political Science Department at the Universidad Nacional de Colombia-Medellín. They would like to thank their colleagues and students in struggle.

Note: As announced on November 16, formal negotiations between students and the Ministry of Education and the Ministry of Finance are set to resume on Monday, November 19, and through dialogue and negotiation, students at the Universidad Nacional de Colombia-Bogotá have reached an agreement with Rector Dolly Montoya to de-occupy the administrative building on the Bogotá campus.

This article originally appeared on NACLA.