Who Will Save the World? Travels Through the Texas Panhandle 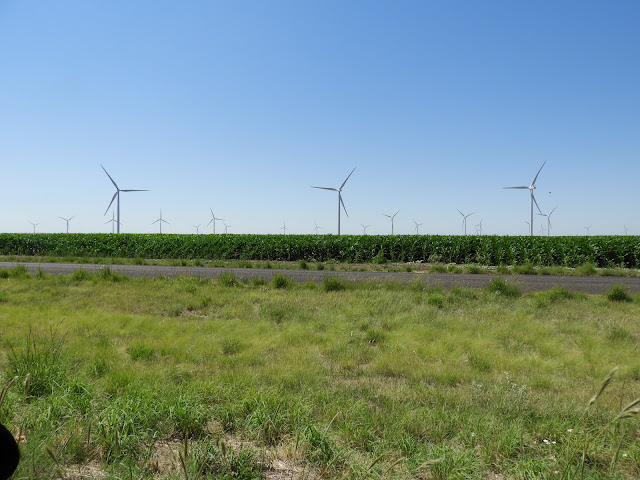 The world can’t give
All its life and live
We must give back or lose it.

— “Music is the Food of Thought”, written by Tony McPhee

When The Groundhogs released Who Will Save The World in 1972, it followed a popular format in rock music at the time – theme albums. But the theme Tony McPhee chose for his songs may have been a first for rock music – “earth first.” The cover was designed to look like the action comics of the day. Up in the left-hand corner, where you might usually find a brand name like “Marvel”, it contained the phrase “When danger arises, up from inner space come the MIGHTY GROUNDHOGS.”

Recently I took a trip from Springfield, MO to Tucson, AZ. Much of the trip was along the same route I had made many times in the late ‘80s and ‘90s with my family, to CD and record trade shows in Los Angeles. On one of those trips, Don Henley was autographing copies of Heaven Is Under Our Feet, a collection of essays edited by Henley and journalist Dave Marsh. The book was part of Henley’s Walden Woods Project – an ultimately successful effort to save Walden Woods from development by purchasing the portions that weren’t already under protection. The Groundhogs weren’t nearly as successful in their efforts to bring attention to environmental concerns in the United States (the album peaked at no. 202 on the Billboard album charts) but did have noticeably better results overseas (no. 8 on the British charts).

I took my dog, Sally, on my recent trip. Sally, like many non-humans, not only takes notice of what’s on top of the ground, but what’s under the ground as well. I’ve learned to pay attention to Sally and follow her lead. Heaven is, indeed, under our feet. Hell can be, too.

As we passed through the Texas Panhandle, the landscape had changed quite a bit since those trips to L.A. Gone were the small wooden or steel windmills and their small collection ponds for cattle. Gone was the sagebrush that the cattle feed on. The cattle had moved onto feeding lots. It the sight of cattle, tens of thousands of them, corralled in tightly packed pens makes your stomach churn, you probably shouldn’t travel I-40 through Texas. But you should know they’re there and think about that the next time you bite into a hamburger.

But what of the sand and native grasses? 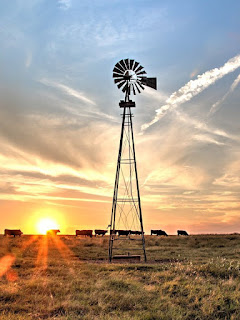 On those earlier trips out to L.A., the first giant windmills started showing up in the passes leading from the high desert into Los Angeles. “What a wonderful thing,” I thought. “Using wind power to light such a vastly populated area.” Passing through the Texas Panhandle last week, those windmills were everywhere. Thousands of them, stretching over millions of acres. But there were no cities to light. Hardly any houses at all. What there was were vast fields of vegetation – lush green vegetation. Looks can be deceiving.

You see, the largest aquifer in the world, the Ogallala Aquifer passes directly under the Texas Panhandle – the entire width of it.

From Wikipedia: “Large scale extraction for agricultural purposes started after World War II due partially to center pivot irrigation and to the adaptation of automotive engines for groundwater wells. Today about 27% of the irrigated land in the entire United States lies over the aquifer, which yields about 30% of the ground water used for irrigation in the United States. The aquifer is at risk for over-extraction and pollution. Since 1950, agricultural irrigation has reduced the saturated volume of the aquifer by an estimated 9%. Once depleted, the aquifer will take over 6,000 years to replenish naturally through rainfall.”

What Wikipedia doesn’t say is how much of that 9% has happened in just the last decade or two. Or how long the aquifer can last under such an accelerated draining. Capitalists can sure fuck up a good idea. When the aquifer reaches a point where it can no longer be exploited, Capitalists will do what they always do – abandon it. They’ll leave behind a legacy of destruction that dwarfs the slag heaps outside of Pittsburgh, burning rivers in Cleveland, lead mines in western Missouri, and even the Dust Bowl of the 1930s. Dust Bowl? Fool me once, shame on you. Fool me twice, shame on me.

The Mighty Groundhogs didn’t save the world. But they served notice. Now it’s up to you and me.