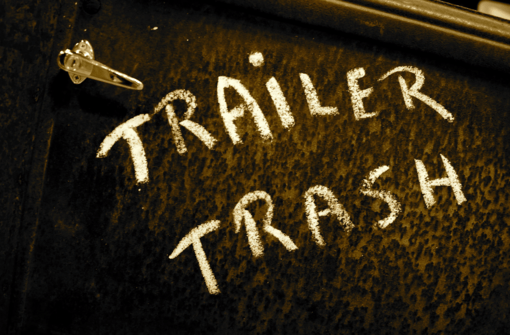 “Trailer trash” remains one of the last unquestioned relics of political incorrectness in our nation. This slur rests on fundamental cultural assumptions about people who live in trailer parks: that they are simple-minded, lawless, reckless with fertility, and indifferent to the very behaviors that mark as them worthy of ridicule. As a toxic slur, the “trailer trash” brand works to stigmatize an entire category of people marginalizing  them from mainstream society.

During the late 1990s, the two of us spent considerable time at the kitchen tables of parents raising children in rural trailer parks. Virtually all of these parents worked full time in manufacturing and service jobs in which wages have been stagnant for decades. They embarked on mobile home ownership just as financial giants like Countrywide opened a gateway to homeownership for low income households by offering high-interest loans with no down payment. Trailer park residency was not a lifestyle choice but the consequence of financial realities and a dream that homeownership might offer their children a kind of stability, security, and respect they lacked in their own  adverse childhoods. Today, some 12 million Americans live in one of our nation’s 45,000 rural trailer parks.

In our decade of field research in rural Illinois, New Mexico and North Carolina, we documented how the ‘trailer-trash’ slur undermined the self-worth and identity of working-poor families living in trailer parks, as homeowners.  As one mother explained to us, “I never tell anyone where I live… I’ll do almost anything to avoid saying I live in [a trailer park]- I’m too embarrassed about it.”  Her perception of the need to manage stigma by protecting one’s address was a belief uniformly shared by white families, in particular, as we found ‘trailer trash’ seems to be a variant of the ‘white trash’ put down commonly used toward the rural poor.

We found little evidence for the stereotypical notions of slovenly lives embodied in this slur. The 40 trailer park families we came to know well were employed, limited their family size, and the mobile home they owned and the rented lot it sat on were neat and well maintained. Unlike media representations, they were not the poorest of the poor, nor were their neighborhood conditions typified by crime, noise, litter, deteriorated housing, or poor social services. They wanted good schools for their children and to be respected as proud homeowners in the wider rural communities where they lived.

Buying a home, even one with wheels beneath, was for the families we studied, a major accomplishment. Many were the first in their family to mount the initial rung on what they hoped was a ladder leading to conventional homeownership on owned land. But for most families, realizing the benefits of their hard-won status as homeowners is compromised by our national contempt for trailer parks and those who call them home. That contempt, which inaccurately portrays rural trailer park life, bore real social and economic consequences for the families we studied.  It is time we put this outdated and inaccurate slur to rest and instead honor the accomplishments of these rural families as pioneers settling a tarnished housing form that with wider national acceptance, and adjustment of the structural and financial challenges homeowners face, holds the potential for addressing our national affordable housing crisis.