Who Filled the Graves Of Hué?

Both Ken Burns and Anthony Bourdain have recently recycled the myth of National Liberation Front massacres in Hué during the Vietnam War. The real story, however, was quite different, as revealed at the time by one of the great correspondents of the era Wilfred Burchett. In order to set the record straight, we are reprinting his piece on Hué for The Guardian in 197o.–JSC 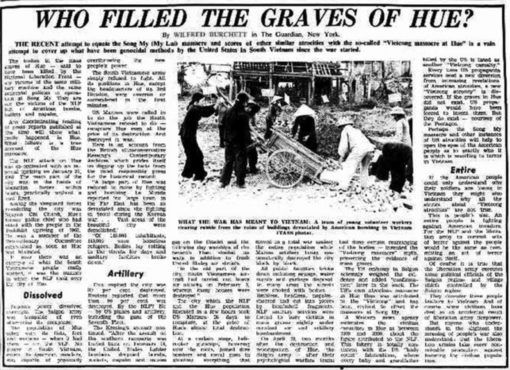 The recent attempt to equate the Son My (My Lai) massacre and scores of other similar atrocities with the so-called “Vietcong massacre at Hué” is a vain attempt to cover up what have been genocidal methods by the United States in South Vietnam since the war started.

The bodies in the mass graves of Hué — said to have been killed by the National Liberation Front — are victims of the same military machine and the same genocidal policies in operation at Son My. They are not the victims of the NLF but of American bombs, bullets and napalm.

Any discriminating reading of press reports published at the time will show what really happened in Hué. What follows is a true account of the Hue massacre.

The NLF attack on Hué was co-ordinated with an internal uprising on January 31, 1968. The main part of the city was in the hands of liberation forces within hours, practically without a shot fired.

Among the vanguard forces re-entering the city was Nguyen Chi Chanh, Hué’s former police chief who had sided with the people in the Buddhist uprising of 1966. He was a member of the Revolutionary Committee established as soon as Hué was liberated. If ever there was an example of what the South Vietnamese people really wanted, it was the manner in which the NLF took over the city of Hué.

Saigon’s power dissolved overnight. The Saigon army was incapable of even attempting its recapture. The population of Hué voted with its fists, feet and weapons — when it had j them — for the NLF. No power in South Vietnam, except the American invaders, was capable of physically overthrowing the new people’s power.

The South Vietnamese army simply refused to fight. All its positions in Hue, except the headquarters of its 3rd Division, were overrun or surrendered in the first minutes. US Marines were called in to do the job the South Vietnamese refused to do — recapture Hué even at the price of its destruction. And destroyed it was.

Here is an account from the British ultraconservative Keesing’s Contemporary Archives, which prides itself on digging up the facts from the most responsible press for the historical record:

A large part of Hue was reduced to ruins by fighting and bombing. Le Monde reported ‘no large town in the Far East has been so devastated since the fighting in Seoul during the Korean war… Vast areas of the beautiful city were demolished.’

Of 145,000 inhabitants, 113,000 were homeless refugees. Bodies lay rotting in the streets for days and sanitary facilities broke down.

This implied the city was 80 per cent destroyed. Reuters reported that more than 90 per cent was destroyed. By the NLF? No — by US planes and artillery, including the guns of the Seventh Fleet.

After the assault on the southern ramparts was hurled back on February 14, the United States fighter bombers dropped bombs, rockets, napalm and nausea gas on the Citadel and the following day warships of the Seventh Fleet shelled its walls, in addition to fresh United States air strikes.

“In the old part of the city, South Vietnamese air craft had carried out heavy air attacks on February 3, wherein many houses were destroyed.

The city which the NLF and the Hue population liberated in a few hours took US Marines 26 days to recapture, at the price of Hue’s almost total destruction.

At a certain stage, helicopter gunships, hovering over the roofs, joined dive bombers and naval guns in shooting everything that moved in a total war against the entire population while Marine artillery tanks systematically destroyed the city block by block.

All public facilities broke down including sewage, water supply and garbage disposal. In many areas the streets were choked with bodies — limbless, headless, napalm-charred and cut into pieces by bombshell fragments.  NLF sanitary services were forced to bury victims in mass graves nightly under constant air and artillery bombardment.

On April 23, two months after the destruction and reoccupation of Hue, the Saigon army — after their psychological warfare teams had done certain rearranging of the bodies — invented the “Vietcong massacre” myth, presenting the evidence of mass graves.

The US embassy in Saigon solemnly weighed the evidence and added “confirmation” later in the week. The US’s own atrocious massacre in Hue thus was attributed to the “Vietcong” and has been revived to offset the massacre at Song My.

A Western news agency estimates the civilian casualties in Hue as between 2000 and 3000, about the figure attributed to the NLF.

This fakery is totally consistent with the US “body count” fabrications, where every baby and grandfather killed by the US is listed as another “Vietcong casualty.”

Every time US propaganda services need a new diversion from increasing revelations of American atrocities, a new “Vietcong atrocity” is discovered. If the graves in Hue did not exist, US propaganda would have been forced to invent them. But they do exist — courtesy of the Pentagon.

Perhaps the Song My massacre and other instances of US atrocities will help to open the eyes of the American people as to exactly who it is which is resorting to terror in Vietnam.

If the American people could only understand why their soldiers are losing in Vietnam they might also understand why all the stories about “Vietcong atrocities” are not true.

This is people’s war. An entire people is fighting against American, invaders.

They consider these people traitors to Vietnam. And of course some civilians have died as an accidental result of liberation army firepower.

But anyone who understands in the slightest the meaning of people’s war also understands that the liberation armies take every conceivable precaution against harming the civilian population.

Wilfred Burchett was an Australian journalist, who covered World War II, the Korean War and the war in Vietnam. His many books include Shadows of Hiroshima, Memoirs of a Rebel Journalist and Vietnam Will Win. Burchett died in 1983.