After Harvard’s John F. Kennedy School of Government rescinded its invitation to Army whistle-blower Chelsea Manning (whom Obama sprung from the brig by pardoning her), a chorus of protest (led by 19,000 Harvard alumni and 169 professors) ensued. The main issue, according to them and the press, was how the Institute of Politics (IOP) at the Kennedy School of Government (KSG) caved to deep-state pressure. Specifically, current CIA Director Mike Pompeo cancelled his talk at the school, and former CIA deputy director Michael Morrell tendered his resignation to Harvard’s Belfer Center, saying “I cannot be a part of an organization…that honors a convicted felon and leaker of classified information,” apparently believing that only the best and brightest war criminals deserve such honorifics (horrorifics?). When, after all, has the CIA ever taken Harvard publicly to task for slack on the national security front?

Lesson learned. Sure enough, a penitent dean Douglas Elmendorf quickly issued a statement admitting that Manning’s appointment as a Fellow “was a mistake, for which I accept responsibility. … I think we should weigh, for each potential visitor, what members of the Kennedy School community could learn from that person’s visit against the extent to which that person’s conduct fulfills the values of public service to which we aspire.” Ranking high among those values, one is forced to presume, is the necessity of continuing Harvard’s engagement with the deep national security state.

Elmendorf’s reaction was not unexpected. Harvard’s association with spooks goes way back. Let me tell you a little story about the good old boys in the good old days.

My consciousness of Harvard’s central location in the deep state was first raised by the raucous 1966 SDS demo that spoiled Robert McNamara’s (M.B.A. ’39) visit to the brand new IOP that Barney Frank (BA ’61, JD ’77) had organized. That came two months after I arrived on campus as a graduate student and war protestor. That awareness festered, flared and sort of fizzled until in 1969, when a general strike seized Harvard, demanding it address a multitude of sins, some alleged to have been committed by its Center For International Affairs (CFIA; never forget to include that little F). And so, around 3 AM on October 14th 1970 my wife and I were ejected from sleep when a resounding explosion rattled our apartment. “Sounds like someone just blew up the Center for International Affairs,” I told her as I bolted from bed. “Let’s go see.”

We hurriedly dressed and hastened the three blocks to CIA’s little baroque brick HQ on Divinity Avenue to the wail of sirens. We arrived just as the Fire Department was deploying hoses to fan flames issuing from the absent front door. My surmise was correct. This must have gone down for good reasons, I assumed. But those reasons would take a while to fully surface.

Soon enough, responsibility was claimed by the “Proud Eagle Tribe,” (later identifying as the Women’s Brigade of the Weather Underground) in its first direct action, for which no one was ever apprehended. Their communiqué the next day stated “The fall offensive has begun. We all want to build a militant women’s movement that commits itself to the destruction of US imperialism.” Their only other direct action came in March 1974 when they exploded a small bomb at the San Francisco office of the Department of Health, Education, and Welfare.i

There were reasons aplenty for radicals to want to trash CIA, coaxed into being in 1958 by Harvard’s Dean of Arts and Sciences and cold warrior McGeorge Bundy (MA ’51, LLD ’61) with support from the Ford Foundation. Its first Director was Robert R. Bowie (JD ’34), then director of the Policy Planning Staff at the State Department, who had once worked at the Ford Foundation. McBundy named Henry Kissinger (AB ’50, MA ‘52, PhD ‘54), then at the Council on Foreign Relations, Associate Director. According to David Atkinson’s book about CIA In Theory and In Practice, Bowie and Kissinger were soon joined by Harvard’s Edward S. Mason (AB ’20, PhD ’25, LLD ’56 (hons)), an economist and Dean of the School of Public Administration—now the KSG—and Thomas Schelling (MA ’48, PhD ’51), the heralded economist who first applied game theory to the Cold War. Atkinson writes: “Bowie quickly established the CFIA as a hub for studying international affairs in the United States. CFIA affiliates produced seminal work on arms control.”ii

CIA is proud of its legacy and self-consciously boasts of its raisons d’être. In a 2014 newsletter, then Executive Director Steven B. Bloomfield (A.B ‘77, M.A. ‘82) gushed:

Ringing in my ears, still, are the words that Robert Bowie uttered at a Fellows’ conference and reunion in November 1995. He said, simply, that his design in assembling the Fellows from all over the world at Harvard was “to encourage empathy.” (I admit that there are those who said that was not at all the voice of the crusty, challenging Bob Bowie, Center Director, but rather that of Bob Bowie, wise man in retrospect.) He was insistent … to build bridges between scholars and practitioners, between students and international affairs specialists, and from Fellow to Fellow so that they might meet in an official place someday and practice empathy. It would seem a valuable endeavor to be achieved by an elite university worthy of its status.

Let’s Get Down to Business, Gentlemen

(How many of these had Harvard affiliations, I do not know. Harry Howe Ransom wrote extensively about the CIA.iii Journalist Kraft and all-star Ted Sorensen had been speechwriters for JFK; eight years hence, Jimmy Carter would tap Ted to run the CIA only to have Republicans shoot down the nomination in favor of  Stansfield Turner. Truman was then Dean of Columbia College, from which I had recently graduated.)iv

Bissell (Deputy CIA Director of Plans, responsible for projects such as the U-2 spy plane, the Bay of Pigs Invasion, and the Corona spy satellite program ) was affiliated with the CIA, and served with Harris on a ”Faculty Study Group on United States Foreign Area Programs” that met from 1967 to 1969.v Also in that group of 14 were: political scientist Samuel Huntington (then also a DoD Consultant and auteur of the disastrous “Strategic Hamlets” program or as he called it, “forced urbanization”); historian Richard Neustadt (advisor to JFK and LBJ, and later first director of KSG’s IOP); and other in-and-outers such as Adam Yarmolinsky (an advisor to McNamara and several other administrations); East Asian scholars Lucian Pye (an early proponent of the Vietnam war and member of CFR); and Edwin O. Reischauer (back after serving as US Ambassador to Japan); and Lyman Kirkpatrick (recently retired CIA Executive Director).

Bissell (a Groton / Yale Man, actually) became a Wall Street lawyer after a stint with OPC (later folded into CIA) after the war but his hands soon itched to get dirty again. Once in Washington, prep school classmate columnist Joseph Alsop (AB ’32) brought him into his circle. They called this astoundingly incestuous informal social club of 25 or so spooks, newsmen, academics, and diplomats the “Georgetown Set.” Most of these men (some accompanied by spouses) were old-school-tie patrician power players—sort of an Ivy League Cosa Nostra. Among the swells at Joe Alsop’s weekly soirées sipping martinis and pretending to adore his turtle soup one might find George Kennan, Dean Acheson, Ben Bradlee, Phil and Kathy Graham, the brothers Rostow, and spymaster Frank Wisner (whom Bissell eventually succeeded at the Agency). Also at some point Kissinger, who once quipped, “The hand that mixes the Georgetown martini is time and again the hand that guides the destiny of the Western world.” You can’t know the players without a scorecard. This one comes via Politico. Be sure to explore the data tips. 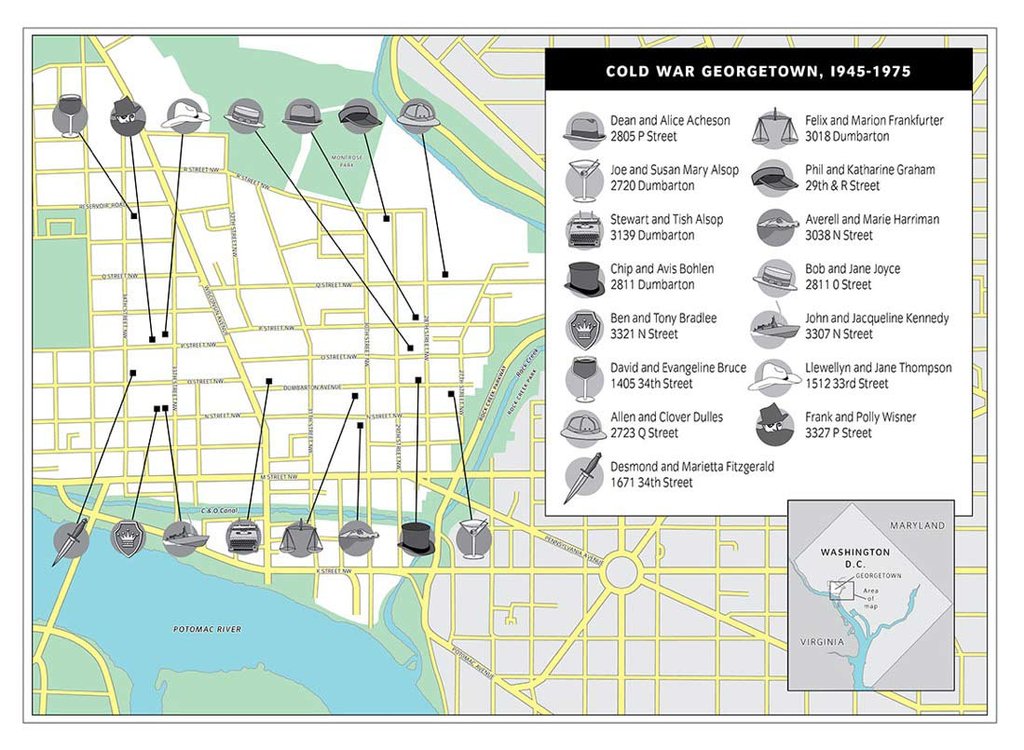 Bissell kicked off the 1968 CFR meeting at the elegant Harold Pratt House with a rundown on how the Executive branch vets CIA projects via a matrix of committees, at the top of which was the “Special Group,” a “Cabinet-level committee, comprising a representative of the White House staff the Under Secretary of State, Deputy Secretary of Defense, and in recent years the personal participation of the Director of Central Intelligence. Over the years this committee has become a more powerful and effective device for enforcing control.” Control, lest some rogue agent go off half-cocked.
US Ambassadors sometimes are left clueless and some prefer it that way, Bissell said: “Generally, the Ambassador had a right to know of any covert operations in his jurisdiction, although in special cases (as a result of requests from the local Chief of State or the Secretary of State) the chief of station was instructed to withhold information from the Ambassador. Indeed, in one case the restriction was imposed upon the specific exhortation of the Ambassador in question, who preferred to remain ignorant of certain activities.”

As for the inevitable snafus, Harris writes (elided for brevity; see transcript):

Even at the time, espionage was considered less useful than “national technical means;” already, spooks were dumping cloak-and-dagger HUMINT to make love to its geeky rival SIGINT. Traditional spycraft, Bissell said, “would seem to be the only available technique is that concerning enemy intentions,” but “has been disappointing with respect to both these types of intelligence. … We don’t need espionage to learn British, or even French intentions.” And so;

The general conclusion is that against the Soviet bloc or other sophisticated societies, espionage is not a primary source of intelligence, although it has had occasional brilliant successes … [E]spionage operates mainly through the recruitment of agents and it is enormously difficult to recruit high level agents. A low level agent, even assuming that he remained loyal and that there is some means of communicating with him, simply cannot tell you much of what you want to know. The secrets we cannot find out by reconnaissance or from open sources are in the minds of scientists and senior policy makers and are not accessible to an ordinary citizen even of middle rank.

Surveillance is simpler, he said, in the “underdeveloped world,” where there “is less security consciousness; and there is apt to be more actual or potential diffusion of power among parties, localities, organizations, and individuals outside of the central governments.” Espionage in such contexts can help understand internal balances of power, “intelligence that is primarily of tactical significance.”

Keeping track of who’s who abroad is important because “Again and again we have been surprised at coups within the military; often, we have failed to talk to the junior officers or non-coms who are involved in the coups. The same problem applies to labor leaders, and others.” He then observes in John Le Carré fashion:

There is real scope for action in this area; the technique is essentially that of “penetration,” including “penetrations” of the sort which horrify classicists of covert operations, with a disregard for the “standards” and “agent recruitment rules.” Many of the “penetrations” don’t take the form of “hiring” but of establishing a close or friendly relationship (which may or may not be furthered by the provision of money from time to time).

The same goes for Amerika, as SDS and weatherpersons called it. The guest lists for the Bissell meeting and Joe Alsop’s salon starkly illuminate how penetration works here. While alcohol no doubt fuels some friendly relationships abroad, here we see good buddies drinking martinis before going forth to manipulate the public. And for their part, the gentlemen (and the occasional lady) of Harvard should be congratulated for their robust dedication to keeping America safe for spooks and slyly fronting for them with all the grace and insouciance one might expect of the well bred.

A tip o’ the hat to Ron Jacobs for help untangling the strands of the weather movement.

1) A tip o’ the hat to Ron Jacobs for his history of the weather movement. Find his text at archive.org; http://bit.ly/2fx1Yd3

2) In 1998, Harvard obsequiously renamed CfIA the Weatherhead Center for International Affairs, apparently unaware of the ironic play on “weathermen.”