Comparing testimony from Vietnamese women and American soldiers, Gina Marie Weaver, in her book Ideologies of Forgetting: Rape in The Vietnam War, finds that rape of Vietnamese women by American troops during the US invasion of Vietnam was a “widespread”, “everyday occurrence” that was essentially “condoned”, even encouraged, by the military, and had its foundation in military training and US culture.  She explores why US rape in Vietnam was so common, and why this aspect of US behavior has been virtually “erased” from “narratives of the war”.  She stresses the issue is also important as rape in the US military continues at a high level today, having been mostly transferred away from foreign populations and onto female American soldiers.

Rape of Vietnamese women by US troops “took place on such a large scale that many veterans considered it standard operating procedure.”  It was “systematic and collective”; an “unofficial military policy”.  One soldier termed it a “mass military policy.”  Indeed, rape followed by murder of Vietnamese women was “so common that American soldiers had a special term for the soldiers who committed the acts in conjunction: a double veteran”.  Examples of soldier testimony regarding rape include: “…they raped the girl, and then, the last man to make love to her, shot her in the head” (Weaver notes the phrase “make love” here speaks in part to the military and general culture’s conflation of love, sex, and violence); two US soldiers dragged a young, naked woman out of a “hootch”.  The reporting soldier said rape was “pretty SOP [Standard Operating Procedure]”.  The woman woman was then tossed onto a “pile” of “19 women and children”, and soldiers around the pile “opened up on full automatic on their M-16s, and that was the end of that”; soldiers pulled a girl out of a bomb shelter and raped her in front of her family.  The reporting soldier said he knew of “10 or 15 of such incidents at least.”  The platoon leader “condone[d] rape”; female prisoners were “raped, tortured, and then were completely destroyed – their bodies were destroyed”; one sergeant reportedly told his platoon, “if there’s a woman in a hootch … rape her.”

Weaver explores the military and civilian culture of the period that produced these behaviors.  Soldiers generally cited racism and sexism, noting these were “pre-existent” and then “heightened” in military training.  One soldier said “the military was just an exaggeration, a caricature, of all that had gone before”.  Weaver notes there was a conflation of “enemy” and “race”; the “enemy” – i.e. the population being invaded by foreigners and slaughtered – 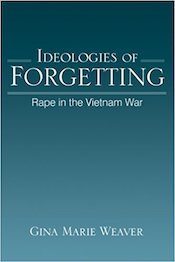 does not have uniforms, but is an entire race of “gooks”, or evil, sub-human “objects”.  US culture and military training also encouraged the idea that women were inferior and the feminine was something to be hated and violently rejected.  Masculinity was defined through violent hostility to femininity.  Women, like the Vietnamese people, were objects – in the case of women, detestable objects that existed to serve men sexually.  Thus, Vietnamese women, Weaver notes, were doubly inferior, doubly hated.  Training essentially demanded men become misogynist predators.  Further hostility towards the feminine arose due to the prominence of women in the Vietnamese forces; the idea of being killed by a woman made the threat of the feminine that much more potent, and aggression against the feminine that much more common and extreme.  There was also an idea in the culture that men simply “had” to have sex; that they could not abstain during their tours of duty.

Weaver further notes some of the aggression acted out in Vietnam arose from the “powerlessness” of the working class American family, a “powerless kin unit” that could not “really determine [its] own future”, causing “powerless” father figures often to lash out violently through “intense male chauvinism”.  US women’s movements of the sixties were “catalyzed by these very attitudes”.  A further “sense of sexual entitlement” was “linked to soldiers’ belief in American exceptionalism” – the belief that the US was doing Vietnam a favor by destroying the country and killing millions of people, so Vietnamese women thus owed something to American men.  Many soldiers also pointed to movies with violent caricatures of masculinity, particularly “cowboys and Indians” films, especially ones starring John Wayne, as inspiration for joining the military.  When film crews came to Vietnam, soldiers would often strike poses as if they were soldiers in a Hollywood movie, thus “pretending to be” what they were.  In 1968, to help propagandize Americans in favor of the war, John Wayne actually made a Western style film, The Green Berets, pitting US soldiers as “cowboys” against Vietnamese “Indians”.  The film was a box office success but panned critically.  Military recruiters claimed recruitment climbed whenever John Wayne films were shown on TV.

Weaver, also a scholar of nationalism, then delves into how and why the history of rape has been “forgotten”, repressed, or erased.  She discusses the ways in which rape is generally used to “reinforce nationalism”: 1) men claim to defend the nation against enemies who would rape “their” women, and 2) rapes committed by one’s own nation are whitewashed, etc.  Thus, to bolster or “restore comfortable myths of American exceptionalism”, “producers of cultural narrative … forget” these and other aspects of US behavior that cause shame; owning up to them would debunk “the militarized … exceptionalism from which such behavior sprang”.  Even academics, “whose special job it is to remember such events”, “participate in this erasure.”  One reason it has occurred, says Weaver, is the nation’s re-positioning and re-imagining of the Vietnam veteran as pure victim.  This erases Vietnamese victims and allows the US nation, by extension, to become the war’s true victim.  This is in part a failure of trauma theory to provide a nuanced analysis wherein a veteran can be both victim and victimizer/war criminal (though it seems this “failure” may be a function of the ingrained nationalism, including in academia, that Weaver describes).  Weaver points out that many veterans are “victimized” by the memory of atrocities they have committed, but by committing them they are also victimizers.  Allowing them to admit what they have done (as many have tried to do) and accepting what they have to say, rather than whitewashing it, is thus, Weaver says, an important part of the healing process.

The “primary vehicle of forgetting violence against women in Vietnam” is “[v]isual media – specifically Hollywood films.”  Weaver looks in particular at some nominally “anti-war” films.  Kubrick’s “Full Metal Jacket,” based on Vietnam veteran Hasford’s novel The Short-Timers, erases Hasford’s depictions of rapes by US soldiers, as well as his illustration of the military conflation of rape and murder.  Hasford’s novel contains no Vietnamese prostitutes, but Kubrick’s film creates two.  Kubrick thus replaces women victimized by Americans with women who corrupt Americans (even though, Weaver notes, the US military was “almost solely responsible” for the proliferation of prostitution in Vietnam through the intentional destruction of the economy and agriculture, which forced people to turn to any means necessary to survive).

Oliver Stone’s “Platoon” depicts a rape about to take place but keeps it out of frame and has the “normative”, everyman American soldier intervene against the “bad seed” outcasts to stop it.  De Palma’s “Casualties of War” does largely the same thing, first bordering on justifying a rape by establishing that the soldiers expected to find prostitutes in the area but did not, then (contrary to its source material), while depicting the rape in frame (though without nudity), having the “normative”, middle-class everyman American (in reality all of the soldiers involved in this were “family men” of the same social class), played by Michael J. Fox, intervene against the lower class “bad seed” soldiers (an intervention that in reality did not occur), thus encouraging the interpretation that this was an atypical, essentially non-American occurrence.  The rapist/murderers were then, in reality, reported and tried.  De Palma includes their trial and sentencing, thus suggesting the problem was both limited and dealt with by the justice system, encouraging feelings of pride and closure.  However, Weaver notes, he erases that the already very short sentences were commuted to virtually nothing.

Weaver mentions that a later Stone film, Heaven and Earth, depicts the rape of a Vietnamese woman, Hayslip, by a North Vietnamese soldier (another rape that actually occurred in real life).  She does not delve into this scene at all, but I hypothesized that it would depict the rape more graphically and directly than any of the other films, would include no intervention to stop the rape, no justification, and no suggestion that the offender was either non-normative or was brought to justice.  I watched the scene, and my hypothesis was correct.  It is the most graphic of any of the rape scenes from the above films.  Stone shows the North Vietnamese soldier pushing Hayslip to the muddy ground in the rain, ripping her top open, starkly revealing her breasts, and then opening his pants and raping her, with medium shots showing the act, including multiple thrusts, and close up shots of both faces during the act: her tortured expression and his evil grimace.  There is no “normative”, everyman North Vietnamese savior to stop the act; the crime is not justified in any way; the rapist is depicted as a normative soldier, while another, similar soldier stands guard.  A close comparison of Stone’s two rape scenes would have contributed to Weaver’s demonstration of how nationalism influences depiction of rape: as Weaver illustrates, rapes committed by members of one’s “own” country tend to be erased, hidden, disavowed, justified, or a “normative”, national everyman savior intervenes to stop the rapes, which are being committed by “non-normative” nationals.  Rape committed by a member of an outside, or especially a targeted nation, on the other hand, can be depicted in graphic and gruesome detail with no redeeming elements whatsoever.

Robert J. Barsocchini is a graduate student in American Studies and a journalist. Years working as a cross-cultural intermediary for corporations in the film and Television industry sparked his interest in the often astounding discrepancy between Western self-image and reality.