Towards the Corbyn Doctrine 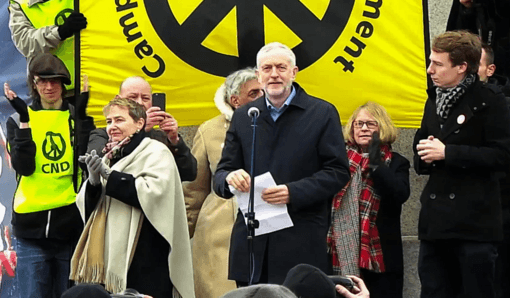 Jeremy Corbyn recently laid out his vision for British foreign policy at Chatham House. The speech drew on the idea of an ‘ethical foreign policy’ to allow Corbyn room to oppose wars without ruling out the use of force in all cases. This was important to dispel the misconception that Corbyn is a ‘pacifist’. The phrase itself is a somewhat woolly concept borrowed from the late Robin Cook.

As foreign secretary in the early years of New Labour, Cook wanted to reshape Britain’s alliances around human rights, the rule of law and democracy. In practice this didn’t amount to much, the UK continued to back dictators and support US wars, but now the government would use a new humanitarian pretext to distinguish between ‘good wars’ and ‘bad wars’.

Long before he ever ran for Labour leader, Corbyn was criticising Cook’s position as incoherent. He did so on the basis of his own consistent anti-war stance, opposing UK involvement in the Kosovo war. So it’s somewhat ironic for Corbyn to co-opt these words. But there is more to this foreign policy rethink than compromise.

In Corbyn’s speech, the Labour leader was clearly working within the limits set upon him by the party machine. He combined the traditional social democratic commitments to NATO and multilateral disarmament with his own opposition to British support for US operations in Afghanistan, Iraq, Libya and Syria. In effect, Corbyn subverted the Cook doctrine.

The ethics of war

Before we look at how Corbyn will change foreign policy, we ought to look deeper at the Cook doctrine and how it was put into practice in the Blair years. It’s important to remember that the New Labour government came to power just as the liberal mainstream was indulging in the fantasy of humanitarian intervention. Tony Blair would take on this fantasy as his cause.

During the first Blair term, the UK was involved in a total of four interventions: Operation Desert Fox in Iraq, sending peacekeepers to East Timor, the NATO bombing of Serbia and the intervention in Sierra Leone’s civil war. Except for Kosovo, these cases are largely forgotten by the public mind. If it weren’t for the Iraq war in particular, New Labour might have got away with its record.

When the UK took part in the NATO bombing of Serbia, it did so outside the remit of international law; but the argument was that the intervention was justified by a moral purpose. This idea of an appeal to moral authority above international law was highly convenient. It would be the same basis for the British intervention in Sierra Leone against the proxy forces of Charles Taylor.

It’s worth noting that the Gaddafi regime was a sponsor of Taylor’s rampages in Sierra Leone. Blair may have opposed Taylor and supported the Kabbah government, but he would also work hard to rehabilitate Colonel Gaddafi. Once Gaddafi was welcomed back into the international community the UK was happy to sell him cluster bombs, which he would later use against his own people.

Perhaps the greatest success story of the first Blair term was ending the conflict in Northern Ireland. All sides applauded the Good Friday Agreement for finally recognising the grievances of Irish Catholics and bringing about a power-sharing arrangement. Though the peace settlement was the result of years of secret negotiations and engagement with Sinn Fein by mavericks like Corbyn himself.

Amid the Kosovo war, Tony Blair gave a speech in Chicago laying out his moral vision of humanitarian warfare. It went much further than anything Cook ever said. Essentially, Blair argued that the sovereignty of a nation-state was conditional and could be violated under certain conditions. Moreover, Blair made it clear that he saw it as a moral duty to support the use of force to promote democracy and human rights.

The argument was that the increased scope of democracy around the world would prevent further conflict in the future. In other words, the Balkan wars really came down to the internal character of the Milosevic regime. Therefore, it was necessary to intervene against Serbia and perhaps bring down Milosevic and ensure that he face justice. This case would set the precedent for future wars.

Then came the 9/11 attacks on the World Trade Centre. At first, the invasion of Afghanistan was justified as a military response to the threat of terrorism, but once the Western powers occupied the country the agenda shifted to regime change and liberal statecraft. This wouldn’t be the case with Iraq, where the moral claims were second only to the legalistic falsehoods about WMD.

Of course, the WMD were just a McGuffin for the war agenda to redraw the politics of the Middle East and replace mercurial tyrants with new client regimes. This is why the Americans immediately opened up the Iraqi economy once they ousted Saddam. They thought the new economy would create the pre-conditions for a pro-Western government. Up until this point Robin Cook had been on Blair’s side.

Faced with the Iraq war, Cook resigned from the Blair cabinet. This was at the same time that Jeremy Corbyn was a leading spokesman for the anti-war movement. After years of disagreements, old friends Corbyn and Cook found themselves on the same side on Iraq. This common ground is why Corbyn can now reclaim the idea of an ‘ethical foreign policy’.

The difference is Corbyn means radical change when he says he wants to rethink Britain’s relationship to countries like the United States and Saudi Arabia. “No more hand-holding with Donald Trump,” the Labour leader was emphatic and clear. He spoke out against Trump’s provocations over North Korea and Syria. But he was also clear on what he wanted to change about the world order.

Corbyn vowed to cut off the flow of British arms to Saudi Arabia. This would go a long way to undermining the Saudi war against Yemen. British arms sales to Saudi Arabia are a major part of the relationship between the two countries. It’s not just about oil. The Saudi royal family spends billions on the West, whether it’s government bonds, the stock exchange or the London property market.

As a conservative regional power Saudi Arabia stands as a bulwark against regional instability (except when such instability suits its own ends, of course) keeping a lid on its own population in particular. As an opponent of empires, Corbyn wants to end this marriage of convenience and withdraw support for Saudi aggression against the people of Yemen. This is just one way Corbyn would change things.

The picture becomes more complicated when it comes to Syria. Some sections of the left have accused Corbyn of being a part of the Ba’athist amen corner. This is due to Corbyn’s unwillingness to advocate British air strikes against the Syrian regime. Other examples include his involvement with the Stop the War Coalition and his invitation to Patrick Cockburn to address Labour MPs on Syria.

If you agree with the premise that Stop the War and Cockburn are apologists for Assad, then the argument just comes down to guilt by association. In the past Corbyn has made it clear he supports aid drops to areas besieged by the Assad regime and he has consistently called for the UK to welcome more Syrian refugees. He supports negotiation in the hope of establishing a peace settlement. And any end of the war at this point would be imperfect.

Of course, this isn’t enough for some. Corbyn opposes the US bombing campaign in Syria and Iraq, just as he opposes Russian bombing. However, it’s not enough to oppose all bombing – you have to be for something – you have to do something. So we find the whole discussion around Syria is framed between two camps: pro-intervention liberals versus pro-Assad leftists. It’s a false dichotomy.

When Corbyn spoke before two million people in protest against the Iraq war, the neocons and liberal hawks argued that the demonstrations were for keeping Saddam Hussein in power. In effect, the anti-war movement was against Saddam’s removal, but it doesn’t logically follow that the opposition to the war itself was equal to support for the regime. Unfortunately, this level of subtlety is lost in the online rows about Syria.

As leader Jeremy Corbyn has had to adopt a centrist style to hold together the unwieldy coalition that is the Labour Party. This means doing more with less. To this end Corbyn has taken on the Cook doctrine and redrawn its limits to fuse radical content with a centrist form. This is what makes Corbyn the strongest anti-war candidate for Prime Minister in British history.