The Riots Will Continue 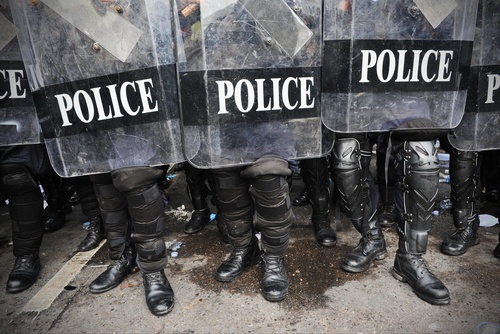 April 26th, 1992
There was a riot on the streets
Tell me where were you?
You were sittin’ home watchin’ your TV
While I was participating in some anarchy

In 1917, white supremacists, the National Guard and the St. Louis Police killed an estimated 150-200 blacks in what is commonly referred to as the “East St. Louis Massacre.” Much like St. Louis, Chicago was an up-and-coming industrial city that was experiencing massive demographic shifts as a result of the “Great Migration” north at the beginning of the 20th century. Similarly, Chicago experienced its own race riots in 1919, where 38 people were killed and 500 injured. Two years later, over 300 blacks were killed in the “Tulsa Race Riot.” In other words, none of this is new for black Americans.

Unfortunately, history has a sick way of repeating itself.

On Friday, September 16th, 2016, a white Tulsa police officer by the name of Betty Shelby shot and killed Terence Crutcher in broad daylight, next to his broken down SUV (she claims she was reaching for her Taser). Four days later, Charlotte police gunned down Keith Lamont Scott as he sat in his car. While people remained somewhat subdued in Tulsa, tensions have increased in Charlotte. So far, one person has been shot and a police officer was sent to the hospital with undisclosed injuries.

The riots continue as I type. I can hear the stomping of police boots, the faint chants of angry protesters and the off-handed remarks of citizen journalists who are truly the only reliable source of live action on the web or T.V. Who needs CNN when I have Facebook friends who are live-streaming the action without the plasticized commentary and right-wing propaganda?

Black people have been rioting in this country for over a century. And unfortunately, while much has changed (only because of the work of brave activists), much remains the same.

From the Harlem Riots in 1964, where the police shot and killed James Powell, a black teenager, to the Miami Riots of 1981, which were the result of the police killing Arthur McDuffie, a 29 year old former marine and black salesman, after a high-speed chase – people have been resisting police violence for many decades.

Today, because of social media and the internet, people around the globe are receiving real-time reports, videos and information about police shootings in the U.S. As a result, White America has been forced to deal with the fact that blacks in the U.S. live in a virtual Apartheid State – both racially and economically. Black lives are threatened by second most trusted institution in American society: the police (the military is number one).

The first riots I can recall are the L.A. Riots of 1992. Indeed, at the time, I had little knowledge (I was in second grade) of why the riots were happening. My father was working full-time and my mother didn’t bother with the news, so no one explained why black people would be so upset that they would burn down buildings and smash police cars.

Without question, I was a typically ignorant and naive white kid who never worried about being beaten, jailed or killed by the police because of the color of my skin.

Almost 25 years later, I try and put myself back in that mindset when talking to some of my white family and friends who still can’t wrap their minds around the fact that it’s not just “a few bad apples,” but the entire prison-industrial-police state (increasingly militarized) that’s the problem. It’s a difficult task, but a necessary one if we hope to build interracial movements.

It may take several years for the proper data to emerge, or maybe we’ll find out because new social movements and coalitions will bloom, but I assume more and more Americans, particularly young Americans who spend their time on the internet, will become increasingly critical of the police, what they do, and who they serve. In some ways, we see this already.

Elites, the media, many whites and the police are hoping existing movements disappear, but they won’t. If anything, the issues of policing, systemic racism, systemic economic inequality and political corruption will only become more prominent as existing institutions become increasingly militarized and violent.

In the meantime, progressive/left political movements are losing on many fronts. Yes, it’s true that people (primarily young black activists) are fighting back, but with limited results. Last year, not one police officer was charged with manslaughter or murder. And this year’s police killings are on pace to break last year’s horrific numbers (1,146 killed). In other words, whatever we’re doing as a movement or a series of movements, isn’t working.

Here, I’m simply writing what I think many activists know, but are hesitant to express: namely, the fact that things are getting worse – ecologically, economically, politically, militarily, etc.

Yet, we continue to resist using the same strategies and tactics, or lack thereof. Further, our movements lack vision. What, exactly, do we want? Yes, we want less shootings, more accountability, less prisons and more jobs, but how do we get those things? And are protests, riots, civil disobedience and citizen journalism enough to stop one of the most vicious and militarized police forces in the world?

Since the murder or Eric Garner, black protesters have chanted “We Can’t Breathe!” Americans should listen.

One of the most important lessons I’ve learned since attending BLM events is that black people are living in a constant “State of Emergency.” They endure state-sanctioned murders on a daily basis, and the problem is getting worse, not better.

In the end, we should always support activists who take to the streets in protest. They’ll receive enough criticism from the mainstream press and reactionary whites – they don’t need it from the progressives and the left.

Until Black Lives Matter, the riots will continue, as they should.