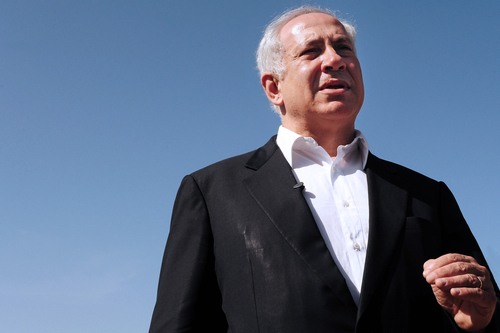 Well, once again, Israeli Prime Murderer Benjamin Netanyahu astounds. One would think that there must be some limit to the bizarre statements that issue from his mouth, but no, we learn again and again that he is willing to push the bizarreness envelope to places where, like the crew of Star Trek’s Enterprise, no one has ever before ventured.

His latest flight of fancy even seems to have astonished his worshipful U.S. government, which characterized his statements as ‘inappropriate and unhelpful’, harsh criticism indeed from that bastion of Israeli love. And what is it that Mr. Netanyahu has said? This writer hesitates to even put the words to paper, they are so incredible. As has been said, ‘you can’t make this stuff up’.

But here it is: He said that he has “always been perplexed by the notion” that the “Jewish community in Judea and Samaria [the Israeli name for the West Bank] is an obstacle for peace.”

So this has always perplexed the Prime Murderer. For years, through countless, meaningless negotiations, United Nations resolutions and international boycotts, he has been unable to understand why driving people from their homes, destroying those homes to build luxury residences for people who, by living there, are in violation of international law, is an obstacle for peace.

Yet the august Prime Murderer did not stop there. No, warming to his topic, he seemed to be on quite a roll, as he said this: “The Palestinian leadership actually demands a Palestinian state with one pre-condition: No Jews. There’s a phrase for that: It’s called ethnic cleansing.”

Elizabeth Trudeau, U.S. State Department spokesperson, said this: “We obviously strongly disagree with the characterization that those who oppose settlement activity or view it as an obstacle to peace are somehow calling for ethnic cleansing of Jews from the West Bank. We believe that using that type of terminology is inappropriate and unhelpful.” And, to indicate the extreme displeasure the U.S. feels about these statements, she further criticized the ‘dramatic escalation’ of the demolition of Palestinian homes, and said that such actions “raise real questions about Israel’s long-term intentions in the West Bank.”

Now, if anyone reading this has ‘real questions about Israel’s long-term intentions in the West Bank’, please raise your hand. This writer sees no hands raised, but assumes that Ms. Trudeau, President Barack Obama, and the odious candidates representing the Tweedle-Dum and Tweedle-Dee parties, Hillary Clinton and Donald Trump, are not reading this essay. They may delude themselves, blinded as they are by the money thrown in their direction by AIPAC (Apartheid Israel Political Affairs Committee), that, up until now, Israel’s leaders had every intention of eventually vacating the West Bank. After all, they might say, look at all the evidence pointing in that very direction. Um, well, doesn’t the emperor have beautiful new clothes?

The uninitiated might believe that, with such blatant violations of international law and the basic human rights of millions of people, the U.S., that self-proclaimed leader of all that is good and just, would exert pressure on Israel to, in short, simply back off. After all, the U.S. sends that apartheid nation $4 billion annually, with absolutely no strings attached. Might the U.S. not, after all, attach a string or two? Perhaps saying that, if Israel wants to continue to receive the largess that the U.S. so willingly doles out, it needs to vacate the West Bank, withdraw to the internationally-accepted 1967 borders, and end the illegal blockade of the Gaza Strip. Is that really too much to ask? What real threat does Palestine, a nation with no army, navy or air force, present to a country with a powerful military machine, backed up by the most powerful?

Ah, but we are forgetting the ‘special’ relationship that the U.S. has with Israel. Yes, when millions upon millions of dollars pour into the campaign coffers of U.S. officials, each dollar of which, we should mention, has strings attached, demanding Congressional votes in whatever way Israel dictates, the relationship between the two countries is, indeed, ‘special’. International law? Not worth considering, if it’s inconvenient. Human rights for the Palestinians? Bah! Who are they? Where is their wealthy lobby?

So as Mr. Netanyahu decries what he somehow sees as Palestinian demands for a West Bank free of Jews, he drives Palestinians out of the West Bank, to build homes exclusively for Jews. While he wonders why illegal settlement activity is an obstacle to peace, more people around the world condemn it. One might think that he is trying to make it appear that, like one’s own back yard, where one can dismantle an old tool shed to build a fancy two-car garage, he is simply removing unnecessary structures on Israeli land, to build new ones. A more apt analogy might be if this writer decided the build a new, two-car garage in his next door neighbor’s back yard. As soon as the bulldozer arrived to demolish the one-car garage that is currently standing there, the police would be called, destruction prevented, and this writer would be hauled away.

But, sadly for the Prime Murderer, his particular fairy story has run out of the gold dust of credibility. No longer do people barely hear some obscure news item about Palestinian homes being demolished to make way for illegal settlements, and then listen intently to the latest, really interesting news about the Kardashians. No, more and more people are turning to social media and getting the facts, seeing the faces of suffering men, women and children, and recognizing the unspeakable injustice that is apartheid Israel.

For the past eight years, President Obama, who is said to detest Mr. Netanyahu, could certainly have made significant changes that would have elevated human rights and international law to the level of priority and significance they deserve. He did nothing. And with either Mrs. Clinton or Mr. Trump poised to move into 1600 Pennsylvania Ave. in January, one can have little hope for change from that quarter.

But the will of the people can only be thwarted for so long. The U.S. stood in isolation for years in its support of apartheid South Africa, and is increasingly isolated in its complete toeing of the Israeli party line. Boycotts and resolutions, strengthening all the time with each new Israeli-perpetrated horror, will succeed, despite all efforts to outlaw them.

Time is running out for apartheid Israel, as it ran out for apartheid South Africa. The sooner Israel and the U.S. wake up to that fact, the sooner peace will come to the Middle East. And while peace there isn’t the goal of either rogue nation, they will have to face the inevitable.