In an unusual move for a reclusive layabout, last week I took a bus to Philly to advocate for peace, justice and what I supposed was the American Way, and do my little part to make the Democratic National Convention less of a coronation for the Queen of Chaos.

Of course, now we know—thanks to anonymous sources on wikileaks—that the DNC rigged the whole campaign in her favor, just as Bernie had been saying. She and they quickly intimated that the Rooskies were behind the hack, but they’re just sayin’ because nobody really knows except them what did it. And now we’re starting to learn how they rigged the convention for her highness too, even though they really didn’t need to.

The other day I heard NPR TV critic Eric Deggans compare and contrast the DNC and RNC qua media events. In his humble opinion, the DNC clearly had the better production values, with entertainment and carefully choreographed speeches that built on the theme du soir. It outclassed the RNC, with its hodgepodge of testimonials—mostly from family members—toasting the Donald’s sterling human qualities while being quite short on platform details. Their extravaganza featured B-list celebrities from reality TV, while the DNC gave center stage to the likes of Paul Simon (fishing for boomers), Alicia Keyes (Afro-Americans), Sarah Silverman (Gen-Xers), and Katy Perry (millennials). They covered all the bases, etching into our brains HRC’s lifelong devotion to (bombing) children.

Now, it used to be that the GOP orchestrated well-disciplined minions who shouted inanities with one voice, while the Dems were an unruly coalition that couldn’t even agree whether to serve chicken or fish at campaign dinners and then whether it should be conventional or organic. But at the DNC in Philly, delegates were herded like sheep and were weighted down with some 400,000 placards they had to brandish at carefully choreographed moments. Did they have APPLAUSE signs too? Bernie Sanders may have stood and delivered his delegations, but at least they did not go quietly into that good night. When a group from Oregon disrupted Leon Panetta’s hawkish speech by chanting “No more wars!” they were joined by sympathizers from Washington, California, and probably other states. HRC dweebs tried to drown them out with creepy cries of “USA! USA!” to stifle a potentially embarrassing TV moment, and the management doused the lights over the Oregonians, only to have them light up their phone torches. There were plenty of other unscripted interludes in and around the arena, not that the media cared to dwell on them.

Ones like this: According to a report by Tom Cahill on USUncut sourced from Twitter, the DNC brought in stooges who lacked floor passes but were nevertheless instructed to take up prime seats in state delegations with strong Bernie factions. In a retweeted video, Eden McFadden, a Sanders delegate from California, describes how when California delegates showed up to take seats they had previously occupied, they were greeted by rows of white OCCUPIED signs stuck to seat fronts and strangers sitting there who turned out not to be delegates. Who were they? Perhaps this Philadelphia craigslist ad that came from that Twitter feed explains it: Any grannies the DNC ended up recruiting surely were no match for the real ones who serenaded the thousands-strong March for a Clean Energy Revolution on July 24th. (A lot of Pennsylvanians are upset over what fracking is doing to their water supplies, and they had a lot to say about it.) The night HRC was to speak, Sanders delegations weren’t allowed to enter the arena until hers had been let in, but managed to reclaim many of their seats from the droids. A little later, someone from on high ordered the doors to the arena to be locked from the outside, apparently to forestall walkouts by Sanders’ delegates. It would just be too bad if a fire broke out.

It’s as if Tammany Hall died and was reincarnated as the DNC. The bosses went so far as to block Nina Turner—a former Ohio state senator and prominent Sanders surrogate—from delivering a nominating speech for Bernie. She had submitted the text to the DNC, she later revealed, but got no word back about scheduling her speech. She learned she wouldn’t take the stage from Sanders himself, who told her that the Clinton campaign did not want her to appear. “No reason was given,” she said. A little later she found herself at an impromptu press conference in the media tent with supporters who included actors Danny Glover, Susan Sarandon, Rosario Dawson, Shailene Woodley, and Kendrick Sampson. The media event was short-circuited when security guards escorted her off the premises. Bernie said he pleaded to keep her on the program but how vigorously he pursued it nobody seems to know.

I like Bernie but I wasn’t ever a big fan. Despite the righteous fire he can project, I see him as a two-dimensional, connect-the-dots figure and a Caspar Milquetoast socialist. My purpose in going to Philly wasn’t to join the throng of Bernsters with their forty creative styles of t-shirts (my fave being simply the words “Bernie Fucking Sanders”). I came to bear witness to the corruption of sell-out party politics and to lend support to the only candidate I have any faith in whatsoever. That would be Dr. Jill Stein, an internist and perennial Green/Rainbow Party candidate here in Mass and the presumptive pick for the Greens when they meet in Houston next week.

Prominent activists including Jill and her erstwhile running mate Cherie Honkala headed up a march for economic justice from Philly City Hall three miles down Broad Street FDR Park, next to the chained-off Wells Fargo Center where the DNC was convening. It was called the March for our Lives, organized by the Poor People’s Economic Human Rights Campaign. The march drew way more than the 300 people or so who showed up with Stein and her fellow notables at the big tent where I was volunteering. Among them were Rosa Clemente, David Cobb (Green candidate for President in 2004), Chris Hedges, and Cornell West. 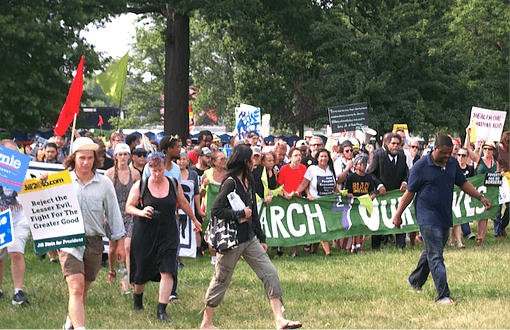 Of those, only Cobb and Stein herself got to speak at her rally, because a severe thunderstorm blew in, pelting the tent and drenching everyone outside. Soon the police told everyone to leave (“for their own safety”) and the crowd dribbled away. Cops in cars, bicycles, and motorcycles were out in force everywhere, but at least not in riot gear. They were generally friendly and helpful, and if they abused anyone I didn’t see or hear of it. But they really didn’t need to: the protesters were incredibly well behaved and security around the Wells Fargo Center was massive. And when the people evacuating the park in pouring rain got to the ATT subway stop next to the arena, they were told by transit cops that the Secret Service had ordered it shut down. We were instructed to walk to the next stop, a soggy mile up Broad Street. There was no city bus service at the subway terminal either, but just across the barrier fence a hundred shuttle buses sat lined up in rows awaiting delegates, press, VIPs, and apparently those 700 hired stooges too.

A couple weeks ago, just after Bernie caved, Jill offered him the VP slot on the Green Party ticket. It wasn’t really hers to offer and he never would have accepted, but it was a shrewd move. Since then, contributions to her campaign have surged over a hundredfold, many from die-hard Bernie supporters who must feel they have nowhere else to go. They may not change the world, but at least they can support efforts to get the Greens on the ballot in more states. And come November, despite the DNC’s concerted messaging, they and the Libertarians could carve away enough votes from both major parties to make Hillary’s expected victory a paltry plurality. That’s about as good as it gets these days.