To Clear the Air, Sanders Should Challenge New York Vote

In November 2004, the officially announced results of the Ukrainian presidential election differed from exit polling by 12%.

Last Tuesday, the results of the New York primary between Hillary Clinton and Bernie Sanders differed from exit polling by 12%.

Tim Robbins has cried fraud, and the Washington Post’s most consistent Clinton hack this cycle is leading the charge in mocking him.

A friend of mine, a Sanders supporter who acted as a poll worker in Brooklyn, initially saw nothing wrong, suggesting that a bunch of people, who were ineligible to vote, cast provisional ballots for Sanders and then told exit pollsters that they voted accordingly. My friend, who has not given me specific permission to use their name, worked a precinct in the Greenpoint neighborhood, Sanders’ best in New York City. About one-third of all ballots were cast provisionally in that precinct.

But that would not explain why exit polling has been so bad in fifteen other states, missing consistently to Clinton’s benefit and outside the margin of error in eight states with open or mixed primaries. 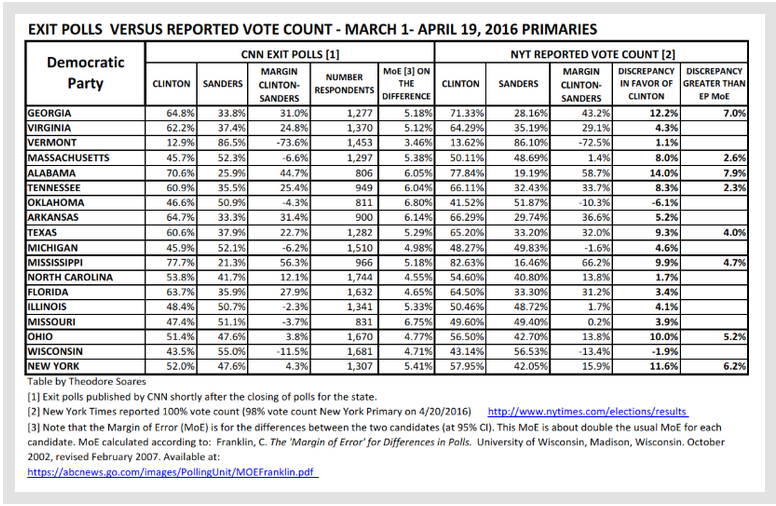 When exit polling and final results are substantially off in places where the U.S. doesn’t like the party that wins, U.S. officials and their media partners cry foul. This has been true in recent decades not just in Ukraine, but also in Belarus, Serbia, and Venezuela. Statistically improbable exit polling differences matter everywhere else, it seems, but not here.

Partisans on either side of the GOP-Democratic divide generally accept that election fraud was engaged in by the likes of Kennedy, Nixon, and possibly George W. Bush. Bloomberg, not exactly a left-wing rag, has very strongly suggested that hacking of U.S. elections has taken place and is taking place in this cycle. Direct testimony from Chicago’s audit of Clinton versus Sanders results says the results were fiddled with in favor of Clinton. There are multiple lawsuits and a federal investigation into voter suppression and potential election fraud in Arizona, with a Federal judge insisting that a hearing on fraudulently switched registrations continue today, against the protestations of Arizona elections officials. A New York Board of Elections official has been scapegoated and suspended without pay for purging more than 126,000 voters in Brooklyn where initial exit pollsshowed Bernie Sanders doing much better than final results. (This scapegoating and likely firing while perhaps tens of thousands of Brooklyn provisional ballots sit uncounted has caused my friend to re-assess whether anything corrupt may be happening.)

When will we take the possibility that funny business is happening seriously?

There was a glaring error in the chart that Tim Robbins tweeted out yesterday; Wisconsin exit polling at closing time showed an 11 point win for Sanders, not a 27 point win.  The more accurate numbers are here and in the chart above. I’ve also looked up the initial announcements for Iowa, New Hampshire (which I cannot find), Nevada, and South Carolina. I’ll go into the details in another post at goodgawdanotherblog.wordpress.com, to be published by tomorrow morning.

In seventeen out of nineteen contests with exit polling since the caucuses in Iowa and Nevada, the exit polls have over-estimated Bernie Sanders’ eventual share of the vote, usually substantially. In nine out of the nineteen contests, the initial exit poll results were outside the margin of error. This is a stunning number of times. There is absolutely no correlation with closed versus open primaries or South versus non-South contests. Translated to a delegate count (not including Arizona because there was no exit polling): Bernie Sanders would have about 58 delegates more and Clinton 58 less. The gap between the two would be about 119 instead of 235. This gap would be closeable, while the actual number is not.

(I have not moved the delegate results for the exit polling in these states because, taken together, the evidence seems to suggest relatively accuracy: Iowa (+6 Sanders versus exit poll at closing), Nevada (-8), New Hampshire (?), Oklahoma (+6), Florida (-3), North Carolina (-2), Wisconsin (+3) for a total of +2 for Sanders in these seven or eight states, about a quarter point deviation from Even when taken in average.)

The only way to begin to clear the air is for the Sanders campaign to use the provisions available via §9–208 of New York’s Board of Election Rules. Those rules allow Sanders to have a representative available while results are reviewed in each election district in the next week.

If there is nothing amiss, let’s put the wild theories to rest immediately with a real review. This, by the way, is what happened in Venezuela in 2004 where the Carter Center negotiated a recount of the vote with both parties present. The recount validated the previous final results. If that happens in New York, Arizona, and Illinois, Sanders fans will just have to admit that Bernie could not get enough traction with Black and Latino voters and re-strategize. Until then, a massive cloud hangs in the air.