Could an Economic Collapse be in Our Near Future?

Climate scientists and others have in the past few years issued a steady stream of analyses showing that without immediate remedial actions, a disastrous future is headed our way. But is it a four-decade-old study that will prove prescient?

That study, issued in the 1972 book The Limits to Growth, forecast that industrial output would decline early in the 21st century, followed quickly by a rise in death rates due to reduced provision of services and food that would lead to a dramatic decline in world population. To be specific, per capita industrial output was forecast to decline “precipitously” starting in about 2015.

Well, here we are. Despite years of stagnation following the worst economic crash since the Great Depression, things have not gotten that bad. At least not yet. Although the original authors of The Limits to Growth, led by Donella Meadows, caution against tying their predictions too tightly to a specific year, the actual trends of the past four decades are not far off from the what was predicted by the study’s models. A recent paper examining the original 1972 study goes so far as to say that the study’s predictions are well on course to being borne out.

That research paper, prepared by a University of Melbourne scientist, Graham Turner, is unambiguously titled “Is Global Collapse Imminent?” As you might guess from the title, Dr. Turner is not terribly optimistic.

He is merely the latest researcher to sound alarm bells. Just last month, a revised paper by 19 climate scientists led by James Hansen demonstrates that continued greenhouse-gas emissions will lead to a sea-level rise of several meters in as few as 50 years, increasingly powerful storms and rapid cooling in Europe. Two other recent papers calculate that humanity has already committed itself to a six-meter rise in sea level and a separate group of 18 scientists demonstrated in their study that Earth is crossing multiple points of no return. All the while, governments cling to the idea that “green capitalism” will magically pull humanity out of the frying pan.

Four decades of ‘business as usual’

At least global warming is acknowledged today, even if the world’s governments prescriptions thus far are woefully inadequate. In 1972, the message of The Limits to Growth was far from welcome and widely ridiculed. Adjusting parameters to test various possibilities, the authors ran a dozen scenarios in a global model of the environment and economy, and found that “overshoot and collapse” was inevitable with continued “business as usual”; that is, without significant changes to economic activity. Needless to say, such changes have not occurred.

In the “business as usual” model, the capital needed to extract harder-to-reach resources becomes sufficiently high that other needs for investment are starved at the same time that resources begin to become depleted. Industrial output would begin to decline about 2015, but pollution would continue to increase and fewer inputs would be available for agriculture, resulting in declining food production. Coupled with declines in services such as health and education due to insufficient capital, the death rate begins to rise in 2020 and world population declines at a rate of about half a billion per decade from 2030. According to Dr. Turner:

“The World3 model simulated a stock of non-renewable as well as renewable resources. The function of renewable resources in World3, such as agricultural land and the trees, could erode as a result of economic activity, but they could also recover their function if deliberate action was taken or harmful activity reduced. The rate of recovery relative to rates of degradation affects when thresholds or limits are exceeded as well as the magnitude of any potential collapse.”

The World3 computer model simulated interactions within and between population, industrial capital, pollution, agricultural systems and non-renewable resources, set up to capture positive and negative feedback loops. Dr. Turner writes that changing parameters merely delays collapse. The current boom in fracking natural gas and the extraction of petroleum products from tar sands weren’t anticipated in the 1970s, but the expansion of new technologies to exploit resources pushes back the collapse “one to two decades” but “when it occurs the speed of decline is even greater.” 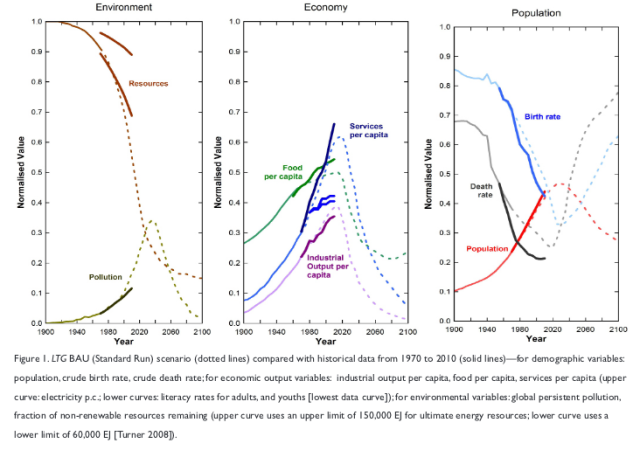 So how much stock should we put in a study more than 40 years old? Dr. Turner asserts that actual environmental, economic and population measurements in the intervening years “aligns strongly” to what the Limits to Growth model expected from its “business as usual” run. He writes:

“[T]he observed industrial output per capita illustrates a slowing rate of growth that is consistent with the [business as usual scenario] reaching a peak. In this scenario, the industrial output per capita begins a substantial reversal and decline at about 2015. Observed food per capita is broadly in keeping with the [Limits to Growth business as usual scenario], with food supply increasing only marginally faster than population. Literacy rates show a saturating growth trend, while electricity generation per capita … grows more rapidly and in better agreement with the [Limits to Growth] model.”

Rising energy costs following global peak oil will make much of the remaining stock uneconomical to exploit. This is a critical forcing point in the collapse scenario. And as more energy is required to extract resources that are more difficult to exploit, the net energy from production continues to fall. John Michael Greer, a writer on peak oil, observes that, just as it takes more energy to produce a steel product than it did a century ago due to the lower quality of iron ore today, more energy is required to produce energy today.

“[T]the sort of shallow wells that built the US oil industry has a net energy of anything up to 200 to 1: in other words, less than a quart out of each 42-gallon barrel of oil goes to paying off the energy cost of extraction, and the rest is pure profit. … As you slide down the grades of hydrocarbon goo, though, that pleasant equation gets replaced by figures considerably less genial. Your average barrel of oil from a conventional US oilfield today has a net energy around 30 to 1. … The surge of new petroleum that hit the oil market just in time to help drive the current crash of oil prices, though, didn’t come from 30-to-1 conventional oil wells. … What produced the surge this time was a mix of tar sands and hydrofractured shales, which are a very, very long way down the goo curve. …

“The real difficulty with the goo you get from tar sands and hydrofractured shales is that you have to put a lot more energy into getting each [barrel of oil equivalent] of energy out of the ground and into usable condition than you do with conventional crude oil. The exact figures are a matter of dispute, and factoring in every energy input is a fiendishly difficult process, but it’s certainly much less than 30 to 1—and credible estimates put the net energy of tar sands and hydrofractured shales well down into single digits. Now ask yourself this: where is the energy that has to be put into the extraction process coming from? The answer, of course, is that it’s coming out of the same global energy supply to which tar sands and hydrofractured shales are supposedly contributing.”

It is that declining energy availability and greater expense that is the tipping point, Dr. Turner argues:

“Contemporary research into the energy required to extract and supply a unit of energy from oil shows that the inputs have increased by almost an order of magnitude. It does not matter how big the resource stock is if it cannot be extracted fast enough or other scarce inputs needed elsewhere in the economy are consumed in the extraction. Oil and gas optimists note that extracting unconventional fuels is only economic above an oil price somewhere in the vicinity of US$70 per barrel. They readily acknowledge that the age of cheap oil is over, without apparently realising that expensive fuels are a sign of constraints on extraction rates and inputs needed. It is these constraints which lead to the collapse in the [Limits to Growth] modelling of the [business as usual] scenario.”

The current plunge in oil and gas prices will not be permanent. Speculation on why Saudi Arabia, by far the world’s biggest oil exporter, continues to furiously pump out oil as fast as it can despite the collapse in pricing frequently centers on speculation that the Saudis’ pumping costs are lower than elsewhere and thus can sustain low prices while driving out competitors who must operate in the red at such prices.

If this scenario pans out, a shortage of oil will eventually materialize, driving the price up again. But the difficult economics will not have disappeared; all the easy sources of petroleum have long since been tapped. And the sources for the recent boom — tar sands and fracking — are heavy contributors to global warming, another looming danger. The case for catastrophic climate disruption due to global warming is far better understood today than it was in 1972 — and we are already experiencing its effects.

Dr. Turner, noting with understatement that these gigantic global problems “have been met with considerable resistance from powerful societal forces,” concludes:

“A challenging lesson from the [Limits to Growth] scenarios is that global environmental issues are typically intertwined and should not be treated as isolated problems. Another lesson is the importance of taking pre-emptive action well ahead of problems becoming entrenched. Regrettably, the alignment of data trends with the [Limits to Growth] dynamics indicates that the early stages of collapse could occur within a decade, or might even be underway. This suggests, from a rational risk-based perspective, that we have squandered the past decades, and that preparing for a collapsing global system could be even more important than trying to avoid collapse.”

Sobering indeed. Left unsaid (and, as always, there is no criticism intended in noting a research paper not going outside its parameters) is why so little has been done to head off a looming global catastrophe. Free of constraints, it is not difficult to quantify those “powerful societal forces” as the biggest industrialists and financiers in the world capitalist system. As long as we have an economic system that allows private capital to accumulate without limit on a finite planet, and externalize the costs, in a system that requires endless growth, there is no real prospect of making the drastic changes necessary to head off a very painful future.

Just because a study was conducted decades in the past does not mean we can’t learn from it, even with a measure of skepticism toward peak-oil fast-collapse scenarios. If we reach still further back in time, Rosa Luxemburg’s words haunt us still: Socialism or barbarism.