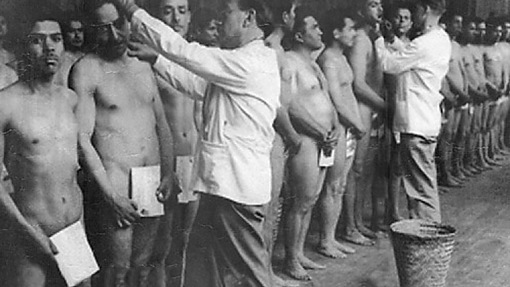 Inspection of Mexican immigrants by the US Public Health Service.

Zyklon B came to El Paso in the 1920s. In 1929, for example, a U.S. Public Health Service officer, J.R. Hurley, ordered $25 worth of the material–hydrocyanic acid in pellet form–as a fumigating agent for use at the El Paso delousing station, where Mexicans crossed the border from Juárez. Zyklon, developed by DEGESCH (the German Vermin-combating Corporation) was made in varying strengths, with Zyklon C, D and E representing gradations in potency and price.

As Raul Hilberg describes it in The Destruction of the European Jews, “strength E was required for the eradication of specially resistant vermin, such as cockroaches, or for gassings in wooden barracks. The ‘normal’ preparation, D, was used to exterminate lice, mice, or rats in large, well-built structures containing furniture. Human organisms in gas chambers were killed with Zyklon B.”  In 1929, DEGESCH divided the world market with an American corporation, Cyanamid, so Hurley presumably got his Zyklon B from the latter.

As David Dorado Romo describes it in his marvelous Ringside Seat to a Revolution: An underground history of El Paso and Juárez : 1893-1923 (available from Cinco Puntos Press, El Paso), Zyklon B had become available in the U.S.A. in the early 1920s when fears of alien infection had been inflamed by the alarums of the eugenicists, most of them from the “progressive” end of the political spectrum. In 1917, the U.S. Congress passed and Woodrow Wilson–an ardent eugenicist–signed the Immigration Law. The United States Public Health Service simultaneously published its Manual for the Physical Inspection of Aliens.

The Manual had its list of excludables from the U.S. of A.,  a ripe representation for the obsessions of the eugenicists: “imbeciles, idiots, feeble-minded person, persons of constitutional psychopathic inferiority (homosexuals), vagrants, physical defectives, chronic alcoholics, polygamists, anarchists, persons afflicted with loathsome or dangerous contagious diseases, prostitutes, contracts laborers, all aliens over 16 who cannot read.” In that same year U.S. Public Health Service Agents “bathed and deloused” 127,123 Mexicans at the Santa Fe International Bridge between Juárez and El Paso.

The mayor of El Paso at the time, Tom Lea Sr., represented, in Romo’s words, “the new type of Anglo politician in the ‘Progressive Era’. Progressive didn’t necessarily mean liberal back then. In Lea’s case, ‘progress’ meant he would clean up the city.” As part of his cleansing operations, Lea made his city the first in the U.S. to ban hemp, aka marijuana, as an alien Mexican substance. He had a visceral fear of contamination and, so his son later disclosed, wore silk underwear because his friend, Dr. Kluttz, had told him typhus lice didn’t stick to silk. His loins thus protected, Lea battered the U.S. government with demands for a full quarantine camp on the border where all immigrants could be held for up to 14 days. Local health officer B.J. Lloyd thought this outlandish, telling the U.S. surgeon general that Typhus fever “is not now, and probably never will be, a serious menace to our civilian population.”

Lloyd was right about this. Lea forced health inspectors to descend on Chihuahuita, the Mexican quarter of El Paso, forcing inhabitants suspected of harboring lice to take kerosene and vinegar baths, have their heads shaved and clothes incinerated. Inspection of 5,000 rooms did not stigmatize Chihuahuita as a plague zone. The inspectors found two cases of typhus, one of rheumatism, one of TB, and one of chicken pox. Ironically, Kluttz, presumably wearing silk underwear, contracted typhus while supervising these operations and died.

But Lloyd did recommend delousing plants, saying he was willing to “bathe and disinfect all the dirty, lousy people coming into this country from Mexico.” The plant was ready for business right when the Immigration Act became law. Soon Mexicans were having their bodies checked, daubed with kerosene where deemed necessary and their clothes fumigated with gasoline, kerosene, sodium cyanide, cyanogens, sulfuric acid and Zyklon B. The El Paso Herald wrote respectfully in 1920, “hydrocyanic acid gas, the most poisonous known, more deadly even than that used on the battlefields of Europe, is employed in the fumigation process.”

The delousing operations provoked fury and resistance among Mexicans still boiling with indignation after a lethal 1916 gasoline blaze in the El Paso City jail. As part of Mayor Lea’s citywide disinfection campaign, prisoners in the jail were ordered to strip naked. Their clothes were dumped in one bath filled with a mixture of gasoline, creosote and formaldehyde. Then they were forced to step into a second bath filled with “a bucket of gasoline, a bucket of coal oil and a bucket of vinegar.” At around 3:30 p.m., March 5, 1916, someone struck a match. The jail went up like a torch. The El Paso Herald reported that about 50 “naked prisoners from whose bodies the fumes of gasoline were arising”, many of them locked in their cells, caught fire. 27 prisoners died. In late January 1917, 200 Mexican women rebelled at the border and prompted a major riot, putting to flight both police and troops on both sides of the border.

The use of Zyklon B became habitual. Health officers would spray the immigrants’ clothes. Now, Zyklon B, in gaseous form, is fatal when absorbed through the skin in concentrations of over 50 parts ppm. How many Mexicans suffered agonies or died, when they put on those garments? As Romo recently told the El Paso-based journalist Paul Spike, writing for the online UK daily The First Post:

“This is a huge black hole in history. Unfortunately, I only have oral histories and other anecdotal evidence about the harmful effects of the noxious chemicals used to disinfect and delouse the Mexican border crossers–including deaths, birth defects, cancer, etc. It may well go into the tens of thousands. It’s incredible that absolutely no one, after all these years, has ever attempted to document this.”

The use of Zyklon B on the U.S.-Mexican border was a matter of keen interest to the firm of DEGESCH. In 1938, Dr. Gerhard Peters called for its use in German Desinfektionskammern. Romo has tracked down an article Peters wrote in a German pest science journal, Anzeiger für Schädlingskunde, which featured two photographs of El Paso delousing chambers. Peters went on to become the managing director of DEGESCH, which handled the supply of Zyklon B for the Nazi death camps. He was tried and convicted at Nuremberg. Hilberg reports that he got five years, then won a retrial that netted him six years. He was re-tried in 1955 and found not guilty.

In the U.S.A., the eugenicists rolled on to their great triumph, the Immigration Restriction Act of 1924, which doomed millions in Europe to their final rendezvous with Zyklon B twenty years later. By the 1930s, the eugenicists were mostly discredited, though many–particularly in the environmental movement–remain true to those racists obsessions to this day. The Restriction Act, that monument to bad science married to unscrupulous politicians and zealous public policy for the sake of unborn generations, stayed on the books unchanged for 40 years.

In 1918, disease did indeed strike across the border, as Romo points out. Romo quotes a letter from Dr. John Tappan, who had disinfected thousands Mexicans at the border. “10,000 cases in El Paso and the Mexicans died like sheep. Whole families were exterminated. This was “Spanish” flu, which originated in Haskell County, Kansas.