Democrats and the Death of Politics

American politics relies heavily on the idea of a clear separation between politics and economics. This has facilitated a stealth politics where political speech is used to sell policies that are then partially or completely countermanded by economic policies. National Democrats can talk all they want to about economic and racial justice, but when they support Wall Street, the military and munitions industries, oil and gas, big pharma and big insurance while leaving the rest of us to the vagaries of ‘market’ outcomes it becomes clear that the fix is in. Political contributions by the wealthy and executives of large corporations make clear that they understand the political implications of economic policies even as political leaders pretend the relation doesn’t exist.

Current economic circumstance finds this small group of plutocrats who effectively control the Federal government doing very well, another 10% – 15% of the population who have seen their lots tenuously restored since 2008 and the remaining 85% or so living in various states of decline. The ultimate pragmatism of the political programs being put forward by Presidential candidates is differentiated by this variance in circumstance— cautious and measured programs that maintain the status quo benefit those who benefit from the status quo. With circumstances for the great majority ranging from declining to dire, pragmatic programs are those that raise food, shelter and physical security and improve health care and education for the poorer 2/3rds of the population. Calls for ‘universal’ pragmatism ignore the extent to which the economic policies of the radical right have reshaped Western political economy since the 1970s. Perpetual pleading for caution and patience have been inexorably tied to this resurgence. Here national Democrats haven’t been simple facilitators. Between deregulating and then bailing out predatory finance, proposing and getting passed misleadingly labeled ‘trade’ agreements and cutting social spending, there is nary a newly blighted inner city neighborhood that doesn’t have Democrat policies associated with its immiseration. National Democrats have accomplished through economic policies the very opposite of the economic and racial justice they proclaim with their political rhetoric.

Today’s highly concentrated incomes and wealth are the result of a political system that works across its various branches to support the interests of the already wealthy through self-reinforcing cause and effect. Beginning in the 1970s deregulation of government sponsored industries; monetary policies that crushed domestic manufacturing and the perceived failure of New Deal programs were combined to propel ‘new’ old capitalism forward. Liberal economists produced expositions of the glories of global capitalism and repairist, pseudo-Keynesian monetary theories when their new-capitalist programs inevitably ran off the rails. Through it all capitalism did what capitalism does— it produced the increasing concentration of wealth that eventually consumes everything in its path.

The type of economics (called ‘economics’) favored by this liberal class was long ago derided as the ‘queen of the social sciences’ because it forwent history, broadly considered, in favor deductive logic occasionally tied to questionable empirics. For example: three hundred years of Western imperialism— colonialism, enslavement, genocide, economic extraction, social destruction and wars for economic resources, are assumed to have left no residual in global economic relations. From this point of departure empty ramblings about welfare gains from international trade were used to support NAFTA, financialization and IMF ‘workouts’ that have been combined to re-colonize the globe. This re-colonization is the result of specific policies, not an accident of history.

Policies sold by liberals as of the Left need to be placed in historical context to make room for more plausible programs. The pseudo-‘trade’ deals like TPP (Trans-Pacific Partnership) currently being pushed by Barack Obama tie to three-hundred years of imperial history. Trade ‘benefits everyone’ in the same way that the spread of Christianity did in the views of Christian missionaries. The alleged ‘beneficiaries’ of imperial largesse were rarely asked if they wanted to be colonized and exploited. Likewise, the ISDS (Investor-State Dispute Settlement) mechanism present in liberal trade deals since NAFTA is designed to further consolidate corporate control over political economy. This state-corporatism also has roots in Italian and German fascism.

This isn’t to call anyone who isn’t a self-declared fascist a fascist. It is to put content to the charge that the neo-liberal program that has either straightforwardly or by-degree been put forward by Western liberals since the 1970s has historical and theoretical roots in imperialism and ideological fascism. It is no accident that increasing state control through surveillance, tracking; militarization of the police and growth of the carceral state have accompanied neo-capitalist ascendance. The tendency toward concentration of political and economic power is expressed through direct control over state policies, as can be seen in establishment politics, and indirectly through processes like financialization that are used to consolidate claims on economic production.

This is why ‘trade’ economics should be tied to broad outcomes like the ongoing crises in the Western peripheries. In a narrow academic sense there is no relation. But in the world that the rest of us inhabit the economic policies of national Democrats have been given theoretical support and gravitas by academic economists and these policies have had determinable consequences. The inter-related effects of trade liberalization, financialization and various crisis remedies’ are undoubtedly complex which is precisely why narrow and decontextualized economic theories are so dangerous in practice. In significant ways this capitalist resurgence appears to have recreated the geo-political witch’s brew that preceded World Wars I and II, only this time with nuclear weapons and impending environmental crisis. 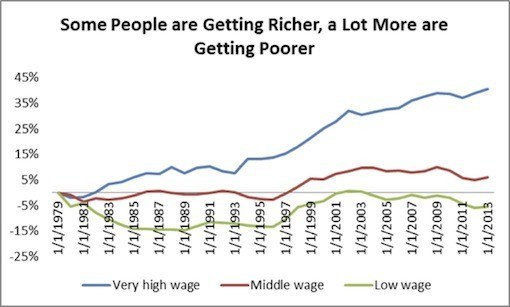 As fact and metaphor the poisoning of Flint, Michigan’s water supply is the obverse of the bank bailouts that restored individual bankers rather that a functioning financial system. In fact, the economic devastation visited by Wall Street on poor communities of color and otherwise through predatory mortgage lending poisoned and killed far more than Flint’s direct poisoning ever could. The bankers who profited were given resources, power and freedom from social accountability by liberal politicians touting neo-capitalist economic theories. Putting these same economists on the ‘clean-up’ crews of their serial catastrophes creates continuity in predation through re-creation of the circumstances that led to disaster.

The destruction of U.S. manufacturing in cities like Flint began with the coincidence of two broad economic programs— Federal Reserve Chair Paul Volcker’s effort to end ‘inflation’ by dramatically raising interest rates and the ascendance of finance that began in Ronald Reagan’s first term. Inflation, an economic ‘object,’ was in fact the outcome of sequential oil strikes that were blowback from failed geopolitical and economic policies. The restructuring of agricultural subsidies coincident with a failed Russian wheat harvest led to high food price inflation. These largely would have resolved themselves without misguided policies from the Federal Reserve. Mr. Volcker’s actions devastated the domestic industrial economy causing what at the time was the longest and deepest recession since the Great Depression.

Extraordinarily high policy interest rates had two consequences— they raised the cost of domestic credit and they raised the value of the U.S. dollar relative to other currencies. The currency revaluation dramatically raised the cost of U.S. exports overseas while it lowered the cost of imported goods domestically. The impact was to make U.S. manufacturing uncompetitive internationally at the same time that expensive oil and credit were raising costs. Add the rise of finance that made production portable by making it fungible and the will of industrial capitalists to destroy the bargaining power of organized labor and a perfect storm descended on the U.S. industrial economy.

Lacking a frame that brings geopolitical blowback, capitalist machinations and historical development into consideration, economists invented ‘stagflation’ as the inexplicable conflagration of otherwise comprehensible events. Stagflation poses the disintegration of Flint, Michigan, Youngstown, Ohio and Pittsburgh, Pennsylvania— places where blacks fleeing poverty and persecution in the rural South came to work in industrial factories, as a natural phenomenon when it was the result of specific policies put in place to serve specific economic interests. This links to liberal trade theory through the alternative history that it provides, one where policy outcomes designed to benefit specific people are converted to whims of nature.

Ronald Reagan inherited this crisis and correctly perceived its political implications. Mr. Reagan implemented a host of tariffs to protect U.S. manufacturing. That is, whatever his ideological predisposition, he perceived that leaving a substantial part of the electorate to its own devices in an engineered recession was bad politics. Mr. Reagan imposed more protectionist policies than any of his near predecessors. It was Jimmy Carter who passed the ‘Trade Agreements Act of 1979.’ And while Ronald Reagan is credited with creating the impetus for NAFTA, it was Bill Clinton who joined with the economic right to get it passed. Additionally, it was Mr. Clinton who substantially deregulated Wall Street giving American industrialists the means to shift production to low wage countries.

Under the cover of Bill Clinton’s ‘liberal’ credentials executive compensation (relative to everyone else’s) began to rise twofold, threefold, twentyfold, one hundredfold, three hundredfold (top chart above). Combined with his demonization of the poor, Mr. (and Ms.) Clinton built on Ronald Reagan’s recovered wedge politics. With the capitalist resurgence at that point further along national Democrats increasingly excluded organized labor from political consideration. In significant ways the Clinton’s completed the shift from broad-based politics to committee politics by and for the rich and connected. A visible representation of this politics can be seen in the myriad films made about the financial part of the economic crisis that began around 2007. The ‘saviors’ of the financial system in this telling are the same people who created the crisis— rich, white Wall Street executives wearing expensive suits and meeting in wood paneled rooms. This is the ‘model’ of politics employed by Barack Obama and the one promised by Hillary Clinton.

This politics ‘for the people’ but not by them is the corporate model. If the rest of us shut up and behave then ‘we all’ will do well goes the claim, never mind four decades (three centuries) of evidence to the contrary. The unresponsiveness of this model is in large measure a function of the class divisions it creates. It is hardly an accident that Bill Clinton and George W. Bush are claimed to be good friends. Their policies were executive management devices, not competing theories about how to best represent the public interest. The ‘Versailles on the Potomac’ analogy ties neo-dynastic politics to this radical separation of policy-makers from the consequences of their policies. This can be seen in official indifference to the catastrophic outcomes of establishment policies from Flint to Baghdad.

When prominent liberals argue that Hillary Clinton can ‘get things done’ they mean that she knows how to navigate court politics. But court politics are between, and in the interests of, courtiers and their plutocrat masters. One need only spend time in a growing number of American cities to see that the difference between economically bombing Chicago or St. Louis and militarily bombing Kabul or Baghdad is of degree, not type. The contention that Hillary Clinton isn’t responsible for her husband’s policies is, to the extent that it is true, a reasonable point. But Ms. Clinton is an establishment Democrat who in her own right has claimed various court positions— homicidal foreign policies, ‘new’ Democrat economic policies; unqualified deference to Israel and depraved indifference to anything that doesn’t put coin and / or political influence into her own pocket. To call this corruption is too limited— it is dead politics put forward as the limit of political possibility.