In Florida’s political circles, criticizing Big Sugar is about as popular as whining about coal in Kentucky. It never happens. Suddenly, though, the tectonic plates are shifting around Florida. It is because of a GOP presidential primary completely scrambled by outsiders who are topping the charts.

A month ago, front runner Donald Trump bumped up against Big Sugar when he condemned the closure of a midwestern candy factory and the loss of jobs to Mexico. He didn’t quite get the reason, right, or the outrage.

The one who does get it right isn’t even on the stage: Grover Norquist. Earlier this year, my eyebrows lifted when I read that Norquist, arguably the most effective conservative firebrand in American politics, declared that ending the sugar subsidy in the Farm Bill was his top priority, after cutting taxes. Norquist called the sugar subsidy, “cronyism in its undiluted, inexcusable majesty.”

The reason my jaw didn’t drop is that for decades, the sugar subsidy has been lambasted as the worst form of corporate welfare from conservative news organizations like the Wall Street Journal to conservative foundations like the Cato Institute and the American Enterprise Institute. And nothing changed.

Big Sugar’s perks amount to legalized corruption of the campaign finance system. In Florida, Big Sugar money influence is so great that the industry acts in the state capitol as a shadow government. What Big Sugar wants, it gets. These days, a solid GOP majority in the state legislature, Gov. Rick Scott, and Adam Putnam — the agriculture secretary aiming to replace Marco Rubio in the US Senate — are so deep in Big Sugar’s pocket, you can’t even see them. Not that Floridians are looking.

So it comes as a shock, at least to this jaded observer, that the rest of the nation is suddenly looking at Big Sugar. It is almost as though Donald Trump has served the purpose of Indiana Jones in the Raider of the Lost Ark, showing the treasure hunters — the rest of the GOP field — that you won’t disappear off the face of the earth if you challenge Big Sugar.

It is Ted Cruz, the Senator from Texas, who pushed through the door first.

In Tuesday’s Republican debate, Ted Cruz pointed to sugar subsidies as a prime example of crony capitalism — a semi-subtle dig at Floridian opponent Marco Rubio, the sugar industry’s man in Washington. Rubio argued yesterday that doing away with our subsidies would mean surrendering American jobs, but neither liberal nor conservative commentators are buying that defense. “It’s hard to credibly criticize the welfare state without trying to take down the corporate welfare state first,” the conservative American Enterprise Institute’s Tim Carney tells Greg Sargent at The Washington Post’s Plum Line blog. “The argument for free enterprise doesn’t have a foundation if you also tolerate corporate welfare.” (Bill Moyers and Company)

It is a sign of desperation that Jeb Bush, trailing his dispirited exclamation point like a wet blanket, has called for the end to the sugar subsidy that keeps domestic sugar at nearly twice the price of world markets and provides profits to sugar billionaires like the Fanjuls of Coral Gables and Palm Beach with seed for next season’s crop of political hopefuls. In eight years as governor, Jeb Bush was as unfailing a friend to Big Sugar as Mitch McConnell to Big Coal in Kentucky.

Marco Rubio owes his political existence to Big Sugar. He carried the industry’s water in the 2003 attempt through the state legislature to up-end the Everglades settlement agreement, helping Jeb Bush in passing a new law that was subsequently over-turned through federal litigation by environmentalists, derided as “The Everglades Whenever Act”. After Gov. Charlie Crist tried to buyout more than 130,000 acres of US Sugar lands, the Fanjuls threw their full weight (and money) to Rubio — then fighting Crist for the US Senate. 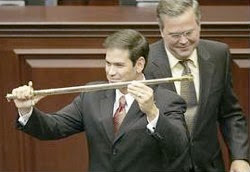 So it is no surprise that Marco Rubio will parrot whatever Big Sugar lobbyists feed him. Most recently, their line of defense was that protectionism is necessary on grounds of “national security”. Rubio complained, “We will not unilaterally disarm”; meaning surrender profits to Brazil. For the first time, though, blowing Big Sugar’s smoke doesn’t seem to be holding.

Rubio’s specious argument is not just an easy target for Cruz. Conservatives who fund political campaigns are being asked — through this disruptive GOP presidential primary — to take the litmus test themselves. Their only defense of Rubio is that he is bought and paid for by Big Sugar.

Although we have been saying that and more for a long, long time — Big Sugar poisons people, poisons democracy and poisons the Everglades — the only way to describe what it feels like in Florida to have the sugar subsidy in the spotlight is: OMG.