The End of Higher Education as We Know It

The academy is entering a dangerous time. Academics now find themselves entering a time when a more comprehensive politics that deals with the rise of authoritarianism through a variety of related fundamentalisms–economic, religious, political, and educational–is being overlooked as a result of an emerging limited and depoliticizing politics of civility and trauma. This is not meant to suggest that dehumanizing behavior and injurious forms of trauma do not matter and should not be addressed. What is disturbing is when such incidents lose their sense of specificity and connections to wider political and economic forces and become universalized and all-encompassing.

Frozen in time and space, this narrow view of politics functions largely to inflict injury against a broader politics and its myraid victims rather than respond to such injuries within a context in which they can be truly addressed. If a politics of civility substitutes conformity and the personal for the political, the politics of trauma collapses the political into the therapeutic. In both cases, the personal universalizes its own narrow privatizing interests and smothers dissent, elevates conformity and the therapeutic as the most viable political practice and in doing so fuels a form of political purity that undercuts any type of broad-based pedagogy of disruption.

As John and Jean Comaroff argue, under a neoliberal regime of affective management, “the personal is the only politics there is, the only politics with a tangible referent or emotional valence.”[1] Under such circumstances, the political value of marginalized groups to narrate themselves is often shut down by critics on the faux left and militant right who refuse to connect the injuries of racism, sexism, and homophobia, among others, to larger political, economic, and cultural structures.

What was once condemned as uncivil now is criticized as causing mass trauma- hence legitimating the move from a reactionary cultural capital that celebrates conformity to one that trades in fear while claiming to be part a fight against injustice. In the end such discourses are not only anti-intellectual, depoliticizing, and essentialist, but also fuel the ability of the right wing to use their 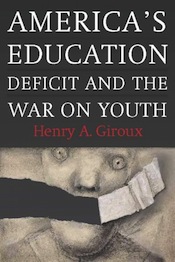 massive cultural apparatuses to point to progressives as authoritarians who are against any viable notion of free speech. Conservatives such as David Brooks trade in this kind of discourse only too willing to portray leftists as the real extremists in American society. It gets worse. What gets lost in the discourses of civility and privatized trauma are those larger injuries of poverty, homelessness, racism, ecological devastation, and mass incarceration. That latter get erased in discourses wrapped in a kind of comforting quietism and universalizing of personal trauma that demands not just the suppression of dissent or the erasure of disturbing images and discourses, but any attempt to explore systemic structural reforms. This is a particularly dangerous position to take given the full-fledged attack now being waged by right wing politicians against the all vestiges of dissent, tenure, and the notion of the university as a democratic public sphere. Academics and their progressive allies need to flip the script and embrace a notion of the political that addresses those authoritarian forces ushering in truly dark times.

The closing down of free speech in higher education, the collapse of critical thought into a repressive, privatized affective, corporatized pedagogy that celebrates ideas, values, and representations that are comforting rather than unsettling, the defunding of higher education, the rise of a corporate driven managerial administrative class, the casualization of faculty, and the now aggressive attack on tenure in Wisconsin and other places should come as no surprise to progressives. This is a truly disturbing trend and historical conjuncture because it suggests a comprehensive authoritarian politics that cannot be addressed merely through the discourses of personal injury and individual responsibility. This current attack on higher education is a central project of the financial and neoliberal elite and dates back to the Trilateral Commission and the Powell Memo of 1971.

The attack on higher education as a democratic public sphere and the formative culture of questioning and critical scholarship it supports has been under attack under the regime of neoliberalism since the late 1970s. Reagan channeled McCarthyism and John Silber fired anyone on the left at Boston University. What came next was a reversal of the sixties–protest and large scale social movements became fractured, either falling prey to political purity, or simply accommodating themselves to power. And as academics have retreated from engaging larger public issues in their work and became more and more insular the attack has intensified, unchecked in many cases.

That kind of insularity is now dangerous, whether it hides behind academic silos, disciplinary specialization, or the jargon of theoreticism. The very conditions which make intellectual labor possible have been under siege intensely since the neoliberal revolution began at the end of the 1970s. The ranks of full-time faculty have been decimated and yet there is no national social and political formation fighting these assaults. Students are drowning in debt and still we have only a scattered response among faculty. Well, now the corporate elite and ideological barbarians have come for tenure and this attack will spread like wild fire

What is needed to counter this attack is not political purity or the fracturing of the left into discourses of personal injury. What is needed is much more. That is, unless academics begin to mobilize and join forces with other social movements, unions, young people, students, and others willing to see such attacks as part of a larger war against the social state, it is not unreasonable to conclude that any remaining vestige of democracy in the United States will disappear.   Academics need to embrace their rolls as public intellectuals and social activists. It is time for them to wake up and organize for a university that addresses crucial social problems, fights ferociously to give power back to faculty, joins with adjuncts to create full time positions and tenured positions for all faculty, join with students to address the forgiving of student debt, and begin and national movement for free public higher education. Such demands are far from radical and they are incomplete, but they certainly point to a new beginning in the struggle over the role of higher education in the United States. As I have said many times, resistance is not an option, it is a necessity.

Henry A. Giroux currently holds the McMaster University Chair for Scholarship in the Public Interest in the English and Cultural Studies Department and a Distinguished Visiting Professorship at Ryerson University. His most recent books are America’s Education Deficit and the War on Youth (Monthly Review Press, 2013) and Neoliberalism’s War on Higher Education (Haymarket Press, 2014). His web site is www.henryagiroux.com.