Specifically, Foreign Minister Mohammad Javad Zarif said: “It’s laughable that Netanyahu has become everybody’s nonproliferation guru. He is sitting on 400 nuclear warheads, nuclear warheads that have been acquired in violation of the NPT.”

In an otherwise valuable article, Kessler uses omission to make the claim of 400 nuclear weapons sound unwarranted, concluding “… his figure is more than double the median for the most recent estimate, and five times higher than another credible estimate. Zarif could make his political point without inflating the numbers. He earns Two Pinocchios.”

However, it appears that perhaps the Pinocchios should actually go to Kessler himself for omitting reports on the subject that didn’t fit his 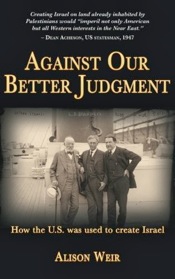 own views, thus skewing the numbers.

For instance, A 2009 study by U.S. think tank Center for Strategic and International Studies stated that an Israeli “stockpile of up to 300-400 weapons is possible.”

A report by Col. Warren Farr from the United States Air Force Center for Unconventional Weapons Studies stated that in 1997 Israel had “400 deliverable thermonuclear and nuclear weapons.”

The Israel Country Study Guide, Volume 1 Strategic Information and Developments, states: “Israel nuclear might is commonly estimated as moving between 200 to 400 nuclear warheads.”

The U.K. Campaign for Nuclear Disarmament reports on its website: “Israel is thought to have between 100 and 400 nuclear weapons.”

And Middle East expert Juan Cole wrote in 2012, “Israel is thought to have 400 atom bombs.”

I could go on and on.

Given this expanded context, Zarif’s claim no longer looks as outlandish as Kessler makes it out to be. In fact, many others say the same thing.

Alison Weir is the president of the Council for the National Interest and executive director of If Americans Knew. She is the author of  Against Our Better Judgment: How the US was Used to Create Israel.