Money for Stocks, Zilch for the Economy

Let’s say you’re diagnosed with colorectal cancer. But instead of going to a professional for help, you decide to treat yourself with glycerol suppositories and high doses of Vitamin C.

This same rule applies to economics. If you try to reduce unemployment and boost growth by doing something completely unrelated to the problem itself, like dumping trillions of dollars into financial assets, then you’re not going to get the results you want.

This is largely the problem we face today. All of the economies controlled by the western bank cartel–Australia, Canada, US, UK, Eurozone, and Japan—are suffering from chronic lack of demand, the likes of which could be easily remedied by following Keynes recommendation of “government directed investment”. But instead of putting people to work building bridges and fixing roads which would provide them with the money they need to spend at the shopping malls and car lots; our glorious bank masters have decided to subsidize all-manner of risky speculation by dropping rates to zero and pumping money into the financial markets.

The beneficiaries of this process, called Quantitative Easing, are the people who typically prosper from Central Bank policy: The Moocher Class.  Take a look at this chart from Bill Moyers. This is “who wins and who loses” with QE.

Average income growth in US recoveries: top 10% versus the bottom 90%. (Graph: Pavlina Tcherneva)

(Smart Charts: An Economic Recovery for the 1%, Bill Moyers)
See that small blue line heading straight down on the far right side. That’s you and me. We’re the victims of this policy. And, no, I am not going to bore you with a lot of blather about 1 percent-this and 1 percent-that. You’ve heard it a million times before, and don’t need to hear it from me.  But it IS important that you get a visual idea of how the policy works, because we’re not talking about a “free market” here. We’re talking about policy, the way the Central Bank rigs the system in order to transfer wealth to a specific group of powerful constituents. Let’s just call it political economy, because that’s what it is. The Fed keeps its thumb on the scale so its moneybags buddies can make out like bandits. That’s how it works.

Why does this matter?

Because on Thursday, European Central Bank president and former Goldman Sachs managing director Mario Draghi launched the latest iteration of QE. The ECB plans to buy 60 bln euros ($70B USD) in sovereign and agency bonds per month starting March 2015 until September 2016. That’s roughly €1.1 trillion altogether. So now global investors will be able to profit off stocks in the EU adding to their bulging cash-trove while widening the chasm between themselves and the lowly 99 percent.  Here’s part of the official statement from the ECB:

They are intended to be carried out until end-September 2016 and will in any case be conducted until we see a sustained adjustment in the path of inflation which is consistent with our aim of achieving inflation rates below but close to 2 percent over the medium term.”  (TEXT – ECB President Draghi’s statement on QE programme, Reuters)

Did you catch that part about how QE will “be conducted until we see a sustained adjustment in the path of inflation”?

That means the bond-splurge could go on forever. It’s completely open-ended. But what Draghi fails to mention is that QE has never succeeded in reaching the central bank’s 2 percent inflation target. Never. Not in the US, not in the UK, and not in Japan. In fact, we can’t be sure that QE boosts inflation at all.  Judging from past experience, it certainly doesn’t look like it.  So for Draghi to say that he’s going to keep his foot on the gas until he hits his target is like me saying “I’m going to keep step-dancing until Mom gets over her Lupus.”

Is there a connection between step-dancing  and lupus?

Nope. Nor is there connection between QE and inflation, except asset inflation that is, which explains why stocks have more than doubled in the last 5 years. But stock prices don’t show up in the CPI, so Draghi can dump as money as he likes into financial markets and it’s never going to show up in the data. Pretty clever, eh?

And there’s no proof that QE lowers interest rates either, so the idea that loading up on government bonds, increases lending is also false. Check this out from economist John Aziz at Pieria:

(The)  “presumption that central banks are lowering interest rates is at odds with the evidence. This graph via Matt O’Brien from last year shows that each time the Federal Reserve has commenced a program of quantitative easing interest rates have actually risen. ….: 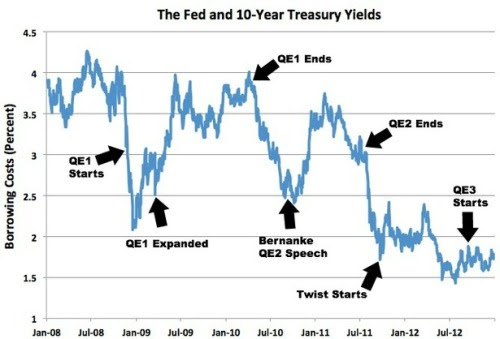 And each time the Federal Reserve has tapered its bond-buying programs, interest rates have fallen back lower.” (Does QE Lower or Raise Interest Rates: the Evidence, John Aziz, Pieria)

Can you believe it? So QE has had the exact opposite effect on bond yields (rates) that it was supposed to have, which makes sense when you realize that investors have just been following the actions of the Central Banks rather than market fundamentals. But –when QE ends– then investors return to the safety of bonds which pushes yields back down again. This has been particularly noticeable since the end of QE3. Yields on benchmark 10-year Treasuries have plunged from roughly 2.70% in October when the program ended to 1.83% today. In other words, it is cheaper to borrow money today than it was when the Fed was purchasing $85 in bonds every month.  This is not the way QE was supposed to work.

But here’s the deal:  The way QE is supposed to work and the way it actually works, is the difference between public relations and reality.  Bernanke and Co. know the difference. You can trust me on this.  Monetary policy is not a random, shot-in-the-dark experiment with uncertain outcomes. The reason that inequality has grown to levels not seen since the Gilded Age, is because the Fed knows who is supposed to gain from its programs, and implements its polices accordingly.  Nothing is left to chance.

So what’s Draghi’s game? Is he merely flooding the markets with liquidity to push stocks higher and further enrich the investor class or is there something else going on here?

How about the banks? Could EZQE (Eurozone QE) actually be a stealth bailout of the banks?

Check out this blurb from macronomy.blogspot.com:

“Société Générale in their European Banks note from the 9th of January:

“€600bn of lost corporate lending….The European corporate loan book has shrunk by €600bn since 2009, the point at which corporate credit volumes began to retreat. Around €450bn of this shrinkage has taken place in the last three years – the period of austere governments and regulators. Almost all of this correction is down to three banking systems: Spain (€400bn lost from peak), Italy (€100bn lost) and Greece (€30bn lost).

The total euro area banking system has shed €7tn in assets since 2008. The first chunk of assets fell away in 2008-09 (typically non-lending assets – subprime, etc.). The second chunk of assets has been falling away since 2011.

At the total balance sheet level, it is actually Germany that has seen the lion’s share of the balance sheet decline. This is largely linked to the non-lending assets that fell away in 2008-09.

Indeed. And while most experts agree that QE will do almost nothing to stimulate growth or reduce soaring unemployment, they also agree that it will push bank stocks higher, intensify their gambling operations, and help them to conceal their lack of capital.  The EU banking system is seriously undercapitalized and needs to be restructured so the debts can be written down.

QE helped to avoid that painful remedy in the US.  Draghi hopes it will work in Europe as well.