Sugar-coated fantasies about the United States of America as a “post-racial society” that guarantees equality before the law are and have always been precisely that: fantasies. Much like the “sugar high” induced by consuming copious amounts of physical sugar, voracious ingestion of this saccharine social delusion leads individuals to similar political and intellectual stupor.

Racism never went away. Signing a piece of paper that purports to guarantee equal rights to all citizens, regardless of race and ethnicity, does not magically whisk away the white supremacist accretions that have been embedded into the very substrata of the fundamental institutions upon which the present economic, social, and political order has been constructed.

To those at the receiving end of racial oppression, the fantastical nature of Post-Racial America™ has always been obvious. In the past few months, however, many more Americans have gotten their first glimpse of this grotesque racism, manifest in a multitude of murders of unarmed black men at the hands of white police.

*On 17 July 2014, 43-year-old father Eric Garner was standing on the sidewalk in Staten Island, New York when police approached, put him in an illegal chokehold, and strangled the life out of him. Garner, asthmatic, cried out “I can’t breathe!” at least 11 times. The medical examiner ruled his death a homicide.

*On 5 August 2014, 22-year-old father John Crawford III was in a Walmart in Dayton, Ohio, holding an air rifle that was for sale in the store, when police gunned him down. The officers claimed they asked him multiple times to drop the air gun; surveillance footage proves that they lied, and that they shot the young man almost immediately upon seeing him.

*On 9 August 2014, 18-year-old Mike Brown was walking down the street with a friend in Ferguson, Missouri before police officer Darren Wilson shot him nine times, three times in the head.

*On 10 September 2014, unarmed 22-year-old Darrien Hunt was in Saratoga Springs, Utah, “cosplaying,” or dressing up like a samuarai, with a fake decorative sword—a common activity among fans of Japanese anime and comics—before he was murdered. Police claim Hunt lunged at them with the toy sword, yet bystanders took photos of the young black man smiling and talking with the white officers, video footage shows Hunt running for his life away from the officers, and an autopsy proves that police shot him six times while his back was turned.

*On 23 September 2014, 14-year-old honor student Cameron Tillman was playing in an abandoned house in Houma, Louisiana with four young friends, as so many kids do, when police shot him. He bled out on the ground for 45 minutes. The police offered no medical assistance. The officers claimed Tillman came to the door with a gun, yet later contradicted their own testimony, alleging that a BB gun was found “in close proximity” to the teen’s body. Tillman’s four friends all said a BB gun was on a table, nowhere near.

*On 20 November 2014, 28-year-old father Akai Gurley was with his girlfriend, in the stairwell of the public housing unit in Brooklyn, New York in which they lived, when a police officer who wasn’t even supposed to be on patrol in the building killed him. Then, while Gurley lay dying, instead of calling for help, the officer texted his union representative.

*On 22 November 2014, 12-year-old Tamir Rice was standing in a park in Cleveland, Ohio, holding a toy airsoft gun, when police drove up onto the grass, leaped out of their car, and shot him within two seconds. Police said Rice was surrounded by people at the time and that the officer who opened fire had asked the pre-teen three times to put up his hands. Video evidence shows both of these claims to be lies.

*On 2 December 2014, 34-year-old father Rumain Brisbon was bringing food to his daughter, in Pheonix, Arizona, before police killed him. Police say they approached Brisbon’s SUV before they shot him. A friend present at the incident avers that this is false. The officers claimed Brisbon reached into the waistband of his pants for a gun. Brisbon was unarmed; all he had in his pocket was a container of pills.

Unfortunately, this is only scratching the surface. There have been more black Americans whose lives have been taken from them—so many, many more. 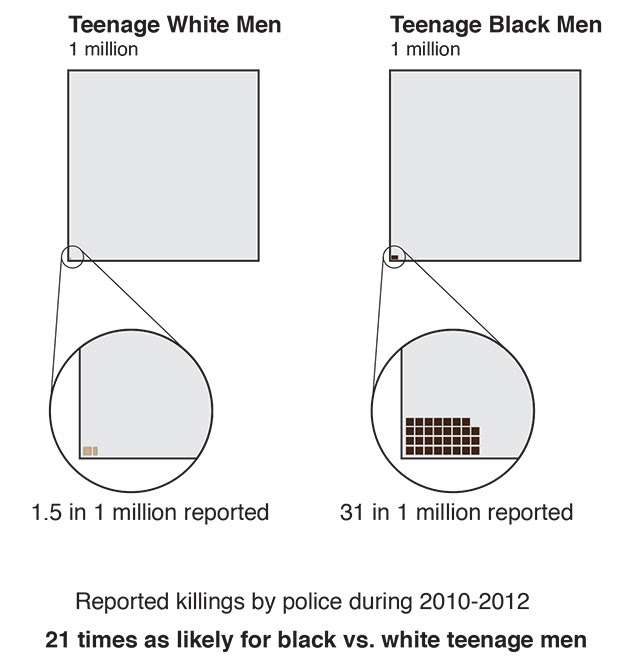 Yet the variety in age of these aforementioned victims of police brutality, along with the widespread geographic dispersion of these crimes, demonstrates that this is not just a problem isolated to a particular age group or a particular place, nor is it limited to particular police officers or particular police forces. Disproportionate numbers of black women are killed by police too, as are so many trans women and men of color. This is a problem of systemic racism against black people, one that is endemic in the Justice System and one that persists across the entire United States.

In all of the above cases, police officers killed unarmed black men, but accused the victims of being the attackers. Video evidence was available in many of these cases and, unsurprisingly, it blatantly contradicted the officers’ claims.

Meanwhile, no police have been legally punished. Not only did these public employees kill innocent, unarmed citizens; many of them are moreover on record lying about killing innocent, unarmed citizens. Such sheer dishonesty has led even corporate media sources to openly question whether police testimony is reliable, but, again, it has not led to a single officer facing trial, yet alone any kind of legal castigation.

In fact, the only person indicted in the murder of Eric Garner was the stranger who filmed police killing him—in a bogus, trumped-up charge that many see as police “retaliation for his role in documenting Garner’s death.” Apparently police murdering innocent, unarmed people—as long as they are black men—is, always and everywhere, justified, but filming the police engaging in these acts of terrorism is a most heinous crime.

As if this weren’t enough, not only are white police not legally punished for murder, they are often rewarded—and lucratively, at that. None other than the leading racist hate group, the Ku Klux Klan, helped to raise half a million dollars for Darren Wilson, the police officer who murdered unarmed 18-year-old Mike Brown.

Civil rights attorney and author Chase Madar has compellingly argued that it is “impossible” to indict a cop, yet this racial double standard also applies vis-à-vis the race of police officers. Average black citizens are not the only ones hindered by systemic racism; even black police do not have the same impunity as their white brethren.

White St. Louis County Prosecuting Attorney Bob McCulloch, whose entire family works for the St. Louis police department and who raised money for the Darren Wilson Defense Fund, did not indict the officer for gunning down Mike Brown—having shot the unarmed black teennine times. But, two weeks before Wilson killed Brown, McCulloch did ruthlessly crack down on a black officer who had hit a man’s hand with a baton. The officer, Dawon Gore, was suspended without pay, thrown in jail on a $3,500, cash-only bond, and charged with second-degree assault. He faces up to seven years in prison. The white officer Darren Wilson, on the other hand, was put on paid leave, got roughly $500,000 in donations, and, once again, was never even charged with a crime.

Clearly, black police are not afforded the same kind of institutional protection white police enjoy. Clearly, the racism in US society is so intense that white police officers can kill innocent, unarmed black men on camera and then lie about it with complete impunity.

As despicable and ludicrous as this trend is, it is by no means new. It is merely a structural embodiment of the continuation of centuries of racism and devaluing of black life.

Five decades ago, Malcolm X spoke about these same grievous ills in the US “Justice” System. The date of this particular speech is unknown, yet it appears to be from the early 1960s, just before he himself was murdered, in 1965.

The police … put their club upside your head and then turn around and accuse you of attacking them. Every case of police brutality against a Negro follows the same pattern. They attack you, bust you all upside your mouth and then take you to court and charge you with assault. What kind of democracy is that? What kind of freedom is that? What kind of social or political system is it when a black man has no voice in court? Has nothing on his side other than what the white man chooses to give you?

My brothers and sisters we have to put a stop to this and it will never be stopped until we stop it ourselves.

In the past months, with a seemingly ceaseless slew of murders of innocent, unarmed black men and women at the hands of police, and with the rise of the Black Lives Matter movement and ubiquitous public disgust over police brutality and institutional racism, Malcolm X’s words continue to hold just as true.

There has always been a racial double standard in the US “Justice” System. Black Americans have always known this—as have Latino Americans, Arab-Americans, and more. It is only now, with the nascence of a new civil rights movement, that the rest of the country is waking up and listening to what they have been saying for centuries.

None of This Is New; It Is Structural

The entire US political edifice was constructed upon genocide of the indigenous population and enslavement of African peoples. White supremacy was the ideology that justified these obscene institutionalized forms of inhumanity. The capitalist system, and the systems of colonialist and imperialist domination capitalism engendered, are rooted in this dehumanization of black and brown life. In the words of Marx, in 1867:

The discovery of gold and silver in America, the extirpation, enslavement and entombment in mines of the aboriginal population, the beginning of the conquest and looting of the East Indies, the turning of Africa into a warren for the commercial hunting of black skins, signalized the rosy dawn of the era of capitalist production.

It is this connection that led Chairman of the Black Panther Party for Self-Defense Fred Hampton—who was assassinated by the US government exactly 45 years ago, at the tender age of 21—to declare that “racism is an excuse used for capitalism, and we know that racism is a byproduct of capitalism.”

In the 1960s, Malcolm X, like the Black Panther Party, insisted that “you can’t have capitalism without racism.” And, while many things may have changed at the surface, the US is still the same white supremacist capitalist system it was in the day of Hampton and Malcolm X. The continued relevance of these civil rights leaders’ words attests to this.

Any new civil rights movement will have to grapple with this crucial fact. Until attempts are made not just to indict racist police officers, but to indict the economic and political system itself—what bell hook refers to as imperialist white-supremacist capitalist patriarchy—it will, in the words of Malcolm X, continue turning victims into attackers and “democracy” into hypocrisy.