According to an August 2014 poll, half of Israelis want to send Obama Ebola for only supporting Israeli terrorism 95, not 100%.

In the wake of Israel’s summer 2014 genocidal massacre in Gaza, euphemistically called Operation “Protective” Edge,” the US corporate media is finally (somewhat) catching on to the egregious degree of violent extremism, racism, and downright fascism in Israeli culture.

A 5 August NBC story, titled “Send President Obama Ebola as Birthday Gift, Some Israelis Say,” reports that, according to a recent poll, 46% of Israelis “said they wanted to give Barack Obama an envelope containing the Ebola virus as a present for his 53rd birthday.”

Note, these aren’t just “some” Israelis, as NBC writes; these are almost half of Israelis.

Vox also ran a story, published on 4 August, when 48% of polled Israelis had advocated sending Ebola. (10% more wanted to send Obama a song based on Prime Minister Netanyahu telling Obama to “never second guess me again.” Never second guess the supreme leader of your totalitarian apartheid ethnostate. Does anyone else smell fascism?) 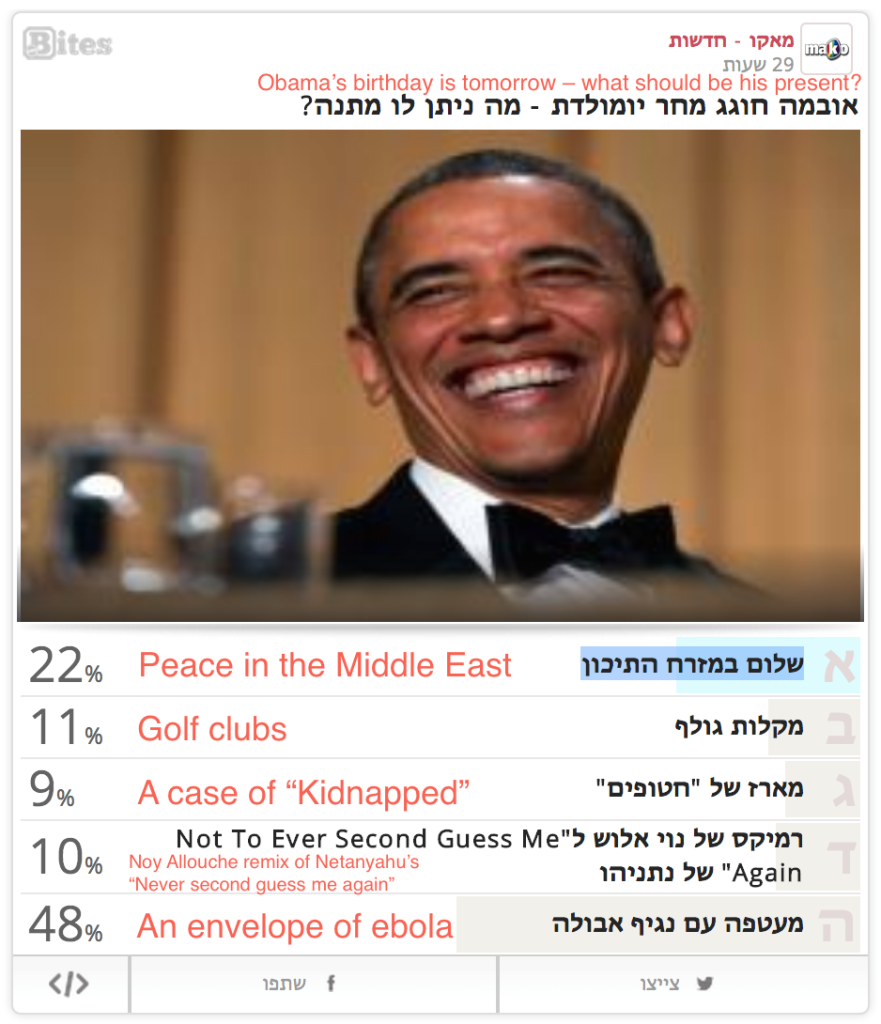 This is the absurd degree of vehement jingoism in Israeli popular culture today. Almost half of Israelis want to send Obama—the president of the country that gives them $3.1 billion in unconditional aid per year, bankrolling their colonization, dispossession, and genocide of the Palestinian people—a deadly disease as a birthday surprise.

NBC reports that over 2,000 Israelis voted in the online survey. “Other less popular choices,” it explains, “included ‘peace in the middle east’ and ‘golf clubs.’” Peace has always been a low priority in Israel. Settler colonialism, occupation, and ethnic cleansing tend to much much, much higher on the list.

It should be mentioned that this survey is not scholarly and statistically rigorous and cannot be meant to be an exact representation of the Israeli population as a whole. Regardless of the precise figure, nonetheless, Mako (the site on which the poll was conducted) is very popular, and it is telling indeed that 46-48% of those who frequent this popular website want to murder the president of the country that gives them billions upon billions in aid.

The NBC story (correctly) calls Obama’s moment of vocal opposition to Israeli crimes “rare criticism from Washington over the high civilian death toll in Gaza.” For the 50 days that Israel was slaughtering children in Gaza, purposefully targeting civilians and civilian infrastructure, including hospitals, schools, places of worship, and families’ homes, Obama continuously insisted that Israel supposedly had the “right to defend itself“—even though, as international law scholar Noura Erakat pointed out, “No, Israel Does Not Have the Right to Self-Defense In International Law Against Occupied Palestinian Territory.”

Israel’s ability to frame its assault against territory it occupies as a right of self-defense turns international law on its head.

A state cannot simultaneously exercise control over territory it occupies and militarily attack that territory on the claim that it is “foreign” and poses an exogenous national security threat. In doing precisely that, Israel is asserting rights that may be consistent with colonial domination but simply do not exist under international law.

She continued, eloquently explaining in the Nation:

The precarious and unstable conditions in the Gaza Strip from which Palestinians suffer are Israel’s responsibility. Israel argues that it can invoke the right to self-defense under international law as defined in Article 51 of the UN Charter. The International Court of Justice, however, rejected this faulty legal interpretation in its 2004 Advisory Opinion. The ICJ explained that an armed attack that would trigger Article 51 must be attributable to a sovereign state, but the armed attacks by Palestinians emerge from within Israel’s jurisdictional control. Israel does have the right to defend itself against rocket attacks, but it must do so in accordance with occupation law and not other laws of war. Occupation law ensures greater protection for the civilian population. The other laws of war balance military advantage and civilian suffering. The statement that “no country would tolerate rocket fire from a neighboring country” is therefore both a diversion and baseless.

Israel denies Palestinians the right to govern and protect themselves, while simultaneously invoking the right to self-defense. This is a conundrum and a violation of international law, one that Israel deliberately created to evade accountability.

Obama was one of the largest purveyors of this grotesque, farcical lie. After several weeks of reiterating ad nauseam the myth that Israel has the legal (yet alone moral) “right” to “defend” itself—as Israel brutally bombed Palestinian civilians into oblivion and dead Gazan babies were kept in ice cream freezers because medical supplies had run out and morgues were overflowing—the Obama administration finally took international community’s hint and reached for a better looking PR move. It was only in the final throes of Israel’s genocide in Gaza that Obama tepidly said, “Hey guys, maybe you should bring it back a little bit. This doesn’t look good.”

Obama’s support wasn’t just rhetorical, however. NBC hints at the irony of this Ebola birthday gift poll, noting that, on his own birthday, Obama gave a generous and hefty gift to Israel: $225 million of additional US citizens’ taxdollars to be used on its Iron Dome missile defense system.

“The White House has been keen to downplay suggestions of a growing rift,” NBC observes. After all, Obama has made it a common practice to emphasize the US’s “unshakable” “commitment to Israel and Israel’s security,” its “strongest ally and greatest friend.”

The US did, after a month of destruction, finally muster up the courage to call Israeli strikes on Gaza schools “horrifying” and “disgraceful” (they forgot to add “in complete and flagrant violation of international law“—but the US has never really cared about international law in the first place, so perhaps we shouldn’t be surprised) yet muffled its already infrequent and quiet moments of hesitation when Netanyahu warned Obama “not to ever second-guess me again.”

In spite of the US president’s almost indefatigable (“almost” being the operative word, in this case) support, most Israelis are livid that Obama is only 95, not 100% behind their project of systemic settler colonialism and ethnic cleansing. As the Vox story points out, a 2013 poll found that “only 10% of Israelis view Obama favorably,” and a 2014 poll concluded that 70% of Jewish Israelis do not trust Obama. Many cite president’s subdued criticism of the expansion of illegal Israeli settlements as the reason behind this growing antipathy, but Obama’s rhetoric is empty at best.

An important distinction should be made here. These studies should not be taken as a demonization of all Israelis. As in the US, there are indeed in Israel anti-racist, anti-fascist, anti-Zionist leftists, who seek peace with the indigenous Palestinians (and with African immigrants), and wish to end their fascist, settler colonialist ethnoreligious supremacist state’s policies of genocide, ethnic cleansing, and occupation. These leftists, in fact, are enormously brave—surely braver than most of us in the US. Here in ‘murica, we may be denigrated, ridiculed, yelled at on the street; we may be fired from our jobs. In Israel, on the other hand, fascist mobs roam the streets chanting “Death to leftists!” and “Gas the leftists!” (along with “Death to Arabs!” and “Gas the Arabs!”, of course). If you are an anti-racist, anti-Zionist Israeli—or an anti-Zionist Orthodox Jew—you go to demonstrations well aware of the fact that fascist mobs will attack you, with complete impunity, police watching and cheering—or, in some cases, even beating you themselves. I could hardly respect Israeli leftists more.

Yet the vast majority of Israelis support their ethnocracy‘s crimes. The vast majority. In regards to Israel’s most recent slaughter in Gaza, that number is 95%, to be exact. This is about as close to a national consensus as you ever get.

In 2012, in Haaretz, renowned journalist Gideon Levy published the results of a poll that found “Most Israeli Jews Would Support Apartheid Regime in Israel.” This study, “expos[ing] anti-Arab, ultra-nationalist views espoused by a majority of Israeli Jews,” was not based on an internet survey. It was conducted by Dialog and directed by professor Camil Fuchs, Haaretz’s polling expert and head of the Department of Statistics at Tel Aviv University’s School of Mathematical Science, and commissioned by the Yisraela Goldblum Fund.

The study revealed the following unsavory facts about Israeli society:

– 59% want preference for Jews over Arabs in admission to jobs in government ministries.

– 42% don’t want their children in the same class with Arab children.

– c. 33% want a law barring Israeli Arabs from voting for the Knesset

– 69% object to giving 2.5 million Palestinians the right to vote if Israel annexes the West Bank.

– 38% want Israel to annex the territories with settlements on them

– 58% do admit that Israel practices apartheid against Arabs

Yet, as polls like these demonstrate, the ills of this system manifest themselves individually. The structural nature of oppression by no means absolves Israelis of the responsibility for the crimes against humanity their “democratic” government commits—after all, Israel is purportedly “the only democracy in the middle east,” as Zionists so often boast—just as we, as Americans, are absolutely complicit in our own government’s acts of racist, imperialist terrorism, whether that manifest itself in the form of perpetual war, drone strikes, torture, or mass incarceration. We can all be considered “little Eichmanns,” as some have called us, in allusion to Hannah Arrendt’s opus Eichmann in Jerusalem: A Report on the Banality of Evil.

The silver lining (and I am not one for silver linings—I find them to be quite bourgeois) in these clouds of death, destruction, and despair is that, as Israel lurches further and further to the right, plunging headfirst into what can only be accurately referred to as fascism, the Western media is gradually waking up. NBC can no longer ignore it when half of Israelis express a desire to kill the US president.

The struggle for just, accurate coverage in the US corporate media—and for the hearts of the minds of the American people—is slowly, but surely, being won. If it were to be awarded a grade, it would still get an F, as Glenn Greewald insists, yet it is beginning to cover stories that it wouldn’t have touched with a 10-foot pole only a few years ago. The Boycott, Divestment, and Sanctions movement is growing, especially among Jewish Americans and student activists. A vicious, McCarthyist campaign of repression of Palestinian solidarity activism is being waged, one that destroys people’s entire careers, yet today’s young Americans constitute the first generation to have seen past the ceaseless barrage of propaganda. Support for Palestinian human rights and liberation is increasing. There is still so much to be done, and a long road ahead of us, yet we have good reason to be optimistic—cautiously optimistic, yet optimistic nonetheless.