Economists Say Solution to Problems is…

Neoliberalism is dead! Long live neoliberalism! Such is the contradictory message given by the OECD in its report on the global economy’s next 50 years.

Seemingly intent on providing yet more evidence that orthodox economics is a service for the one percent rather than a science, the report’s prescriptions are a mix of advocacy of more of the same policies that have brought the world to its present crisis with mild reforms that would be in direct opposition to the logical outcomes of those same policies and contradict the interests of the corporate beneficiaries of those policies.

The paper, “Policy Challenges for the Next 50 Years,” published by the OECD (the Organisation for Economic Co-operation and Development, a club of the the world’s most developed countries along with a few large developing countries), carries the caveat that it does not necessarily reflect the view of OECD member countries, but as it is presented as a “synthesis” of several earlier OECD studies, it is fair to consider the paper an authoritative representation of elite thinking.

Those elites, evidently, see difficulties ahead but believe the adoption of the right policies will allow everything to be just fine as we march into the second half of the 21st century with the world capitalist system intact and robust.

Perhaps the biggest contradiction, or perhaps an unwillingness to think through the implications, is the paper’s prediction of a steady decline in world economic growth, from an overall 3.6 percent (but only 1.2 percent for OECD countries) in the 2010-2020 decade to 2.4 percent (0.5 percent for OECD countries) in the 2050-2060 decade. Although the “Policy Challenges” paper never uses the word, or so much as hints at it, that is a forecast of another half-century of stagnation.

The implications of that stagnation are a sputtering economy, more unemployment and more inequality because capitalism is a system that requires growth. A system based on endless growth can’t function without it — slow growth (all the more so no growth) means misery for working people as the recent years of “recovery” from the 2008 economic collapse has demonstrated. That is so even without the austerity policies advocated by the “Policy Challenges” paper, which would only accelerate dislocation.

A lot of austerity and a little wishful thinking

Among the prescriptions the paper calls for are:

*“Enact social insurance reforms to maintain labour supply in the face of rising longevity and an ageing workforce.”

*Push more of the costs of a university education onto students.

*“Flexible” labor markets that are “pursued in a way that cushions their potentially negative impact on equality.”

At first glance, the above list appears to be a somewhat eclectic mix of austerity and, shall we say, Keynesian lite (albeit with the emphasis on austerity). But the austerity measures fit snugly into current economic policy while the ameliorative measures are directly in opposition to not only current policy but the advocated austerity measures.

The accompanying call for “pension portability” is code for privatizing public-retirement systems. It also presupposes that working people have pensions connected to their jobs, but in the United States that is a relic of the past for the vast majority of employees. At best, a worker might have a “defined contribution” plan such as a 401(k) that mostly relies on the employee’s own contributions and shifts the risks from employer to employee. A public retirement system has no need for “portability”; only a privatized system free of employer responsibility and job security does.

Bullet point number two above, in parallel with “pension portability,” is a polite way of advocating people work more years before being eligible for retirement and receive less money on which to retire. Bizarrely, the OECD paper rests its labor prescriptions on “labor shortages in the OECD” countries! Huh? The unemployment rate for the European Union, which includes most of the OECD countries, is 10.3 percent. The official U.S. unemployment rate is 6.1 percent, but the real rate is 12.1 percent. (The “U-6” figure including part-time workers needing full-time work and discouraged workers.)

The paper forecasts “income convergence between OECD countries and developing countries” in the coming decades (although it does not address if that will be an upward or a downward convergence) that “may dampen work-related migration flows, exacerbating labour shortages in the OECD” [page 26]. Completely missing are future flows of migrants escaping environmental damage from global warming. The paper sees global warming as no big deal, despite predicting that greenhouse-gas emissions will double from 2010 to 2060.

Although the paper does state that “rising greenhouse gas concentrations pose the most comprehensively global risk to economic output,” [page 30] it projects that the cut to global gross domestic product will be only 0.7 to 2.5 percent.

Oh, that’s right, it’s the “magic of the market”

The rosy future of a benign world of international convergence in which income inequality is entirely the product of differentiated skill levels depicted by the OECD paper rests on the neoliberal belief in “free trade” agreements. The paper asserts:

“Openness to trade is associated with higher incomes and growth. These benefits are transmitted through several channels: shifting production from low to high productive locations; relocation of factors of production towards sectors and firms with high productivity; and rising incomes due to an increase in market size that supports more specialisation, faster technology diffusion and stronger incentives to invest in ‘non-rival’ assets.” [page 34, citation omitted]

Reality is far different from these neoliberal fairly tales. Production has been shifted to “high-productive locations” only if we define those as locations in which the maximum possible amount of profit is extracted through the lowest wages and harshest working conditions. That is “productive” — for the industrialists and financiers who extract and pocket these profits.

That “free trade” agreements fill the pockets of capitalists while immiserating working people certainly accounts for much of the reason for the persistent promotion of them as job-building exercises, but not all of it. Ideology also plays a part. The economic models are based on the “magic of the market” that assume, inter alia, that capital and labor instantaneously react to changing conditions but never cross national borders; that market mechanisms will ensure full use of all resources; and that flexible exchange rates will prevent lowered tariffs from causing changes in trade balances.

“[T]his kind of modeling assumes a world in which liberalization cannot, by assumption, cause or worsen unemployment, capital flight or trade imbalances. Thanks to these assumptions, if a country drops its trade restrictions, market forces will quickly and effortlessly lead capital and labor to shift into new, more productive uses. And since trade always remains in balance, this restructuring will generate a dollar’s worth of new exports for every dollar of new imports. Given these assumptions, it is no wonder that mainstream economic studies always produce results supporting ratification of free trade agreements.”

That is still the case as seen in the unrealistic, propagandized boosterism for deals like the Trans-Pacific Partnership and more subtle but similar assumptions imbedded in the OECD “Policy Challenges for the Next 50 Years” paper. The paper, despite its embrace of more reliance on market forces as the “solution” to human development, is seemingly oblivious to the consequences of markets.

Market forces will call the tune, not wishful thinking

Calls for international coordination of taxation and governmental regulations, and for higher capital requirements for banks, fly directly in the face of what has and and will occur as a result of market forces — a race to the bottom. Capitalist markets are nothing more than the aggregate interests of the most powerful industrialists and financiers. “Free trade” agreements continually push rules more draconian, and facilitate monopolies on an international scale, because doing so benefits those interests. That is why these agreements are negotiated in secret, with full participation by corporate lobbyists while labor and environmental advocates are shut out.

To argue, as the final bullet point above does, that “flexible” labor markets should be “pursued in a way that cushions their potentially negative impact on equality” is oxymoronic. Just how are the falling wages and substitution of part-time work for full-time generated by labor “flexibility” not going to create a “negative impact” on equality? 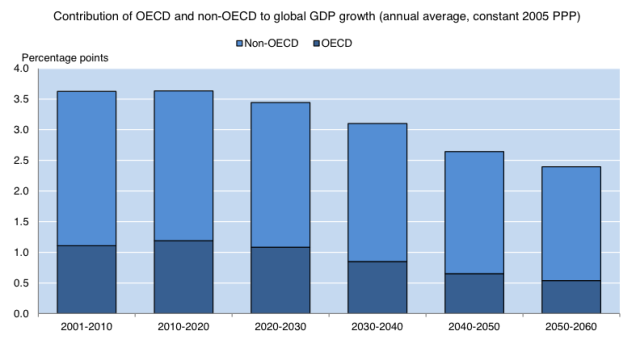 (OECD projections of world economic growth. Graphic from “Policy Challenges for the Next 50 Years” paper, page 15)

The slowing growth forecast — in particular for the world’s mature capitalist countries, forecast to decline to 0.5 percent annually by mid-century and not average much above one percent per year during any other decade — contains serious implications. Again, that is a forecast of permanent stagnation. Under capitalism, gross domestic products must increase faster than the working population because of new machinery, computerization, work speedups and layoffs continually introduced by capitalists subject to relentless competitive pressures.

Economic growth of 2.5 percent is necessary simply to maintain the unemployment rate where it is and “substantially stronger growth than that” is necessary for a rapid decrease, according to a former White House Council of Economic Advisers chair, Christina Romer.

The stimulus to the global economy from the Internet has likely already run its course; thus it would take a future unforeseen technological breakthrough to provide growth on the scale of what was seen during much of the 20th century. The economist Robert J. Gordon, in a2012 paper forecasting dwindling future growth, argued that this most recent period of innovation from computers focused on entertainment and communication devices, while earlier periods of innovation brought a rapid series of inventions that took upwards of a century to be fully realized, fueling long periods of growths.

A major effect of the mass introduction of computers was simply to shift commerce to online merchants from traditional ones. By contrast, the taming of electricity and the inventions of steam engines and automobiles powered development for long periods of time.

An economic system designed to meet human needs, rather than private profit, would have no need to grow. But as capitalism is designed for private profit, and requires continual growth to maintain itself, harsher austerity (and the force that will be necessary to implement it) is what is on offer by the world’s elites.

Pete Dolack writes the Systemic Disorder blog. He has been an activist with several groups.