How “Extreme Levels” of Roundup in Food Became the Industry Norm

Food and feed quality are crucial to human and animal health. Quality can be defined as sufficiency of appropriate minerals, vitamins and fats, etc. but it also includes the absence of toxins, whether man-made or from other sources. Surprisingly, almost no data exist in the scientific literature on herbicide residues in herbicide tolerant genetically modified (GM) plants, even after nearly 20 years on the market.

In research recently published by our laboratory (Bøhn et al. 2014) we collected soybean samples grown under three typical agricultural conditions: organic, GM, and conventional (but non-GM). The GM soybeans were resistant to the herbicide Roundup, whose active ingredient is glyphosate.

We tested these samples for nutrients and other compounds as well as relevant pesticides, including glyphosate and its principal breakdown product, Aminomethylphosponic acid (AMPA). All of the individual samples of GM-soy contained residues of both glyphosate and AMPA, on average 9.0 mg/kg. This amount is greater than is typical for many vitamins. In contrast, no sample from the conventional or the organic soybeans showed residues of these chemicals (Fig. 1).

This demonstrates that Roundup Ready GM-soybeans sprayed during the growing season take up and accumulate glyphosate and AMPA. Further, what has been considered a working hypothesis for herbicide tolerant crops, i.e. that, as resistant weeds have spread:

“there is a theoretical possibility that also the level of residues of the herbicide and its metabolites may have increased” (Kleter et al. 2011) is now shown to be actually happening.

Monsanto (manufacturer of glyphosate) has claimed that residues of glyphosate in GM soy are lower than in conventional soybeans, where glyphosate residues have been measured up to 16-17 mg/kg (Monsanto 1999). These residues, found in non-GM plants, likely must have been due to the practice of spraying before harvest (for desiccation). Another claim of Monsanto’s has been that residue levels of up to 5.6 mg/kg in GM-soy represent  “…extreme levels, and far higher than those typically found” (Monsanto 1999). FIGURE 1. RESIDUES OF GLYPHOSATE AND AMPA IN INDIVIDUAL SOYBEAN SAMPLES (N=31). FOR ORGANIC AND CONVENTIONAL SOYBEANS, GLYPHOSATE RESIDUES WERE BELOW THE DETECTION LIMIT.

Seven out of the 10 GM-soy samples we tested, however, surpassed this “extreme level” (of glyphosate + AMPA), indicating a trend towards higher residue levels. The increasing use of glyphosate on US Roundup Ready soybeans has been documented (Benbrook 2012). The explanation for this increase is the appearance of glyphosate-tolerant weeds (Shaner et al. 2012) to which farmers are responding with increased doses and more applications.

Maximum residue levels (MRLs) of glyphosate in food and feed

The legally acceptable level of glyphosate contamination in food and feed, i.e. the maximum residue level (MRL) has been increased by authorities in countries where Roundup-Ready GM crops are produced, or where such commodities are imported. In Brazil, the MRL in soybean was increased from 0.2 mg/kg to 10 mg/kg in 2004: a 50-fold increase, but only for GM-soy. The MRL for glyphosate in soybeans has been increased also in the US and Europe. In Europe, it was raised from 0.1 mg/kg to 20 mg/kg (a 200-fold increase) in 1999, and the same MRL of 20 mg/kg was adopted by the US. In all of these cases, MRL values appear to have been adjusted, not based on new scientific evidence, but pragmatically in response to actual observed increases in the content of residues in glyphosate-tolerant GM soybeans.

Has the toxicity of Roundup been greatly underestimated?

When regulatory agencies assess pesticides for safety they invariably test only the claimed active ingredient.

Nevertheless, these do not necessarily represent realistic conditions since in practice it is the full, formulated herbicide (there are many Roundup formulations) that is used in the field. Thus, it is relevant to consider, not only the active ingredient, in this case glyphosate and its breakdown product AMPA, but also the other compounds present in the herbicide formulation since these enhance toxicity. For example, formulations of glyphosate commonly contain adjuvants and surfactants to stabilize and facilitate penetration into the plant tissue. Polyoxyethylene amine (POEA) and polyethoxylated tallowamine (POE-15) are common ingredients in Roundup formulations and have been shown to contribute significantly to toxicity (Moore et al. 2012).

Our own recent study in the model organism Daphnia magna demonstrated that chronic exposure to glyphosate and a commercial formulation of Roundup resulted in negative effects on several life-history traits, in particular reproductive aberrations like reduced fecundity and increased abortion rate, at environmental concentrations of 0.45-1.35 mg/liter (active ingredient), i.e. below accepted environmental tolerance limits set in the US (0.7 mg/liter) (Cuhra et al. 2013). A reduced body size of juveniles was even observed at an exposure to Roundup at 0.05 mg/liter.

This is in sharp contrast to world-wide regulatory assumptions in general, which we have found to be strongly influenced by early industry studies and in the case of aquatic ecotoxicity assessment, to be based on 1978 and 1981 studies presented by Monsanto claiming that glyphosate is virtually non-toxic in D. magna (McAllister & Forbis, 1978; Forbis & Boudreau, 1981).

Thus a worrisome outlook for health and the environment can be found in the combination of i) the vast increase in use of glyphosate-based herbicides, in particular due to glyphosate-tolerant GM plants, and ii) new findings of higher toxicity of both glyphosate as an active ingredient (Cuhra et al., 2013) and increased toxicity due to contributions from chemical adjuvants in commercial formulations (Annett et al. 2014).

A similar situation can be found for other pesticides. Mesnage et al. (2014) found that 8 out of 9 tested pesticides were more toxic than their declared active principles.

This means that the Accepted Daily Intake (ADI) for humans, i.e. what society finds “admissible” regarding pesticide residues may have been set too high, even before potential combinatorial effects of different chemical exposures are taken into account.

For glyphosate formulations (Roundup), realistic exposure scenarios in the aquatic environment may harm non-target biodiversity from microorganisms, invertebrates, amphibians and fish, (reviewed in Annett et al. 2014) indicating that the environmental consequences of these agrochemicals need to be re-assessed.

Other compositional differences between GM, non-GM, and organic

Our research also demonstrated that different agricultural practices lead to markedly different end products. Data on other measured compositional characteristics could be used to discriminate statistically all individual soy samples (without exception) into their respective agricultural practice background (Fig. 2). 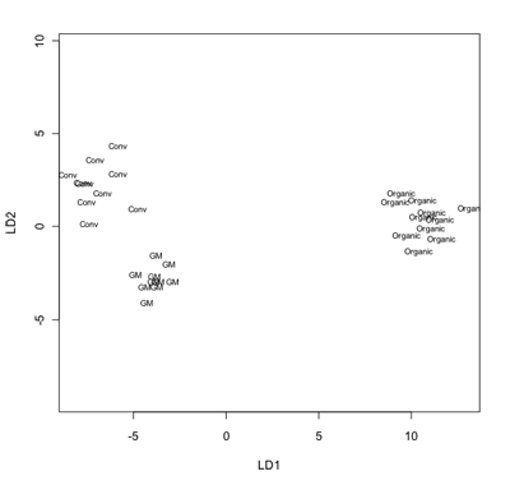 FIGURE 2. DISCRIMINANT ANALYSIS FOR GM, CONVENTIONAL AND ORGANIC SOY SAMPLES BASED ON 35 VARIABLES. DATA WAS STANDARDIZED (MEAN = 0 AND SD = 1).

Lack of data on pesticide residues in major crop plants is a serious gap of knowledge with potential consequences for human and animal health. How is the public to trust a risk assessment system that has overlooked the most obvious risk factor for herbicide tolerant GM crops, i.e. high residue levels of herbicides, for nearly 20 years? If it has been due to lack of understanding, it would be bad. If it is, the result of the producer’s power to influence the risk assessment system, it would be worse.

Thomas Bøhn  is a Professor of Gene Ecology,  at the Centre for Biosafety, Tromsø, Norway,  Faculty of Health Sciences, UiT The Arctic University of Norway

Marek Cuhra is a Phd student at the Centre for Biosafety, Tromsø, Norway , Faculty of Health Sciences, UiT The Arctic University of Norway.

Binimelis, R., Pengue, W. and Monterroso, I. 2009. “Transgenic treadmill”: Responses to the emergence and spread of glyphosate-resistant johnsongrass in Argentina. – Geoforum 40: 623-633.

Kleter, G. A., Unsworth, J. B. and Harris, C. A. 2011. The impact of altered herbicide residues in transgenic herbicide-resistant crops on standard setting for herbicide residues. – Pest Management Science 67: 1193-1210.

This article was originally published by Independent Science News.