US Treasuries Cross Into Danger Zone

10-year Treasuries veered into the danger zone on Friday as yields broke through the crucial 3 percent barrier signaling a slowdown in housing sales due to higher mortgage rates. Fixed rate mortgages are expected to edge higher even though the rate on the 30-year loan increased to 4.48 percent just days earlier. The Fed’s announcement to scale back on its $85 billion per month asset purchases has triggered a selloff in long-term Treasuries that will further constrain lending, shrink the pool of potential homebuyers, and turn a mild slowdown to a protracted slump.

Keep in mind, that the Fed is already buying nearly all of the newly issued mortgage-backed securities (MBS), but even that radical market intervention is having no noticeable impact on interest rates. Take a look at this from the Wall Street Journal:

“The Fed bought about 90% of new, eligible mortgage-bond issuance in November, up from roughly two-thirds of such bonds earlier this year…

The Fed’s reach has been enhanced by its practice of reinvesting the proceeds of its maturing mortgage bonds in its $1.48 trillion portfolio, adding another $15 billion to $20 billion in new monthly mortgage-bond purchases.

The Fed has increased its holdings by $553 billion over the past year. It is on pace to add another $220 billion in purchases in 2014, according to estimates from Credit Suisse.” (“The Fed’s Mortgage Role Expands“, Wall Street Journal)

There is no market for MBS except for the Fed.

On top of that, the Fed is reinvesting the money it takes in on maturing MBS to buy more of this unsellable garbage which adds another $15 or $20 billion to the monthly total.

And all of this is being piled on to the Fed’s bloated $4 trillion balance sheet. (which no one has any idea of what to do with.)

The purpose of the policy is push down long-term interest rates, which it doesn’t do. In fact, as we pointed out earlier, rates are rising while conditions in the housing market are going from bad to worse. For example, existing home sales tanked for the third month in a row in November to a seasonally adjusted annual rate of 4.9 million. November’s sales pace was the slowest in more than a year, which means that higher rates and rising prices are scaring off potential buyers. There are also signs that institutional investors, which represented 50% or more of previous sales, are cutting back on their purchases due to the deteriorating rate environment. Take a look at this brief summary by housing analyst Mark Hanson:

“Las Vegas housing demand has crashed. …This is not hyperbole. “Crashed” is absolutely the appropriate word to use here given sales are suddenly the weakest levels since Armageddon 2009. I mean come on…sales at the same pace as when the stock market was in the midst of one of the greatest plunges in history speaks loudly…at least to me…

… Like Sacramento, Phoenix, regions in the Inland Empire, and a dozen other “hot” real estate markets around the nation…..when the stimulus go-go juice ran out this market hit a literal “brick wall” the size of 2007…” (“Las Vegas Housing Demand Has Crashed While Supply Surging“, Mark Hanson via zero hedge)

When Hanson talks about “stimulus go-go juice”, he’s referring to the Fed’s rate stimulus which evaporated in June when Bernanke announced his intention to “taper” his asset purchases (QE). That led to a frenzied month of bond trading which pushed up yields on long-term USTs more than 100 basis points. The higher rates have put a damper on sales while mortgage applications have plunged to a 13 year low. For all practical purposes, the recovery is kaput.

Here’s an update from Phoenix which had been “red hot” for more than a year:

“The Phoenix-area housing market is quietly ending the year, with a drop in demand and activity… Demand is rapidly dropping, and the supply of homes available for sale is quickly rising…

First-time home buyers, especially those under 30, are showing little interest in getting into the market…

“I anticipate sales will be way down in November and through the holidays, when some people even take their homes off the market until late January,” says Mike Orr, director of the Center for Real Estate Theory and Practice at the W. P. Carey School of Business…

Investors and out-of-state buyers are also losing interest in the Phoenix area. The percentage of residential properties purchased by investors has dropped from the peak of 39.7 percent in July 2012 down to 22.6 percent this October. The percentage of Maricopa County homes sold to out-of-state buyers was down from 20.1 last October to 16.4 this October. That’s the lowest percentage since January 2009.” (“Phoenix housing-market activity quiets down for end of year“, Sonora News)

It’s the same story all over southern California where housing prices had been soaring but hit the skids shortly after the Fed made its announcement. This is from DQ News:

“Southern California’s housing market downshifted last month, with sales falling well below a year earlier as investor activity waned again and buyers continued to struggle with higher prices and a thin supply of homes for sale…

A total of 17,283 new and resale houses and condos sold in Los Angeles, Riverside, San Diego, Ventura, San Bernardino and Orange counties last month. That was down 14.2 percent from 20,150 sales in October, and down 10.4 percent from 19,285 sales in November 2012, according to San Diego-based DataQuick….Last month’s sales were 19.8 percent below the average number of sales – 21,559 – in the month of November.” (“Southland Home Sales Drop; Median Sale Price Edges Sideways – Again“, DQ News)

So what’s really going on in the housing market? Is the sudden jolt in mortgage rates really that big a deal or is the market just taking breather before its next stratospheric surge?

Mark Hanson believes the situation is quite dire and explains why in a “must read” post on his blogsite. Here’s a clip from his article:

But how can that be, you ask, when rates are just 4.5% and home prices are still way below their peak in 2007?

It’s because the types of mortgages that were issued during the boom –all those “exotic, high-leverage, no documentation loans”–allowed borrowers to fake their income and make small monthly payments on obscene amounts of money they would never be able to repay. Keep in mind, interest rates actually rose in 2003, but that didn’t stop the bubble from inflating for 4 more years because lending standards were so ridiculous.

“from 2003 to 07 mortgages were much cheaper on a monthly payment basis than ever before in history and ever have been since. (And it was all due to)…..exotic lending (that) made it so people could keep buying more expensive houses and refinancing at higher loan amounts on income that didn’t support it…”

Hanson draws a comparison between the Fed’s rate stimulus (from 2011 to 2013) to the crappy underwriting which created the housing bubble.(from 2003 to 2007) That’s why he expects the “reset” to be “one for the record books”.

Indeed. The impact of rising rates is already visible in the dismal sales and mortgage applications data. It’s only a matter of time before institutional investors call it quits and prices begin to fall.

Here’s a chart from Hanson’s blog. The sudden spike in interest rates has reduced “affordability” putting home ownership out of reach for many potential buyers. 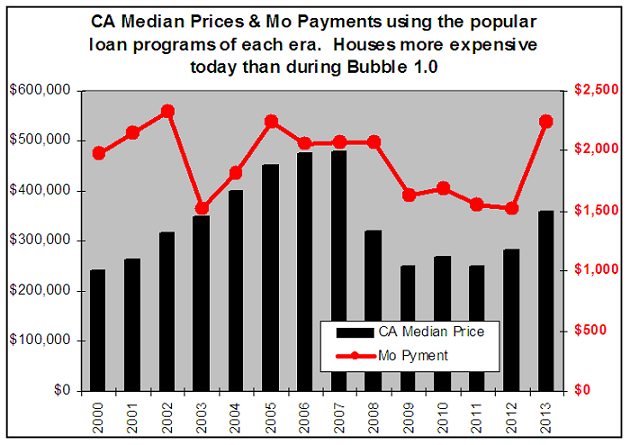